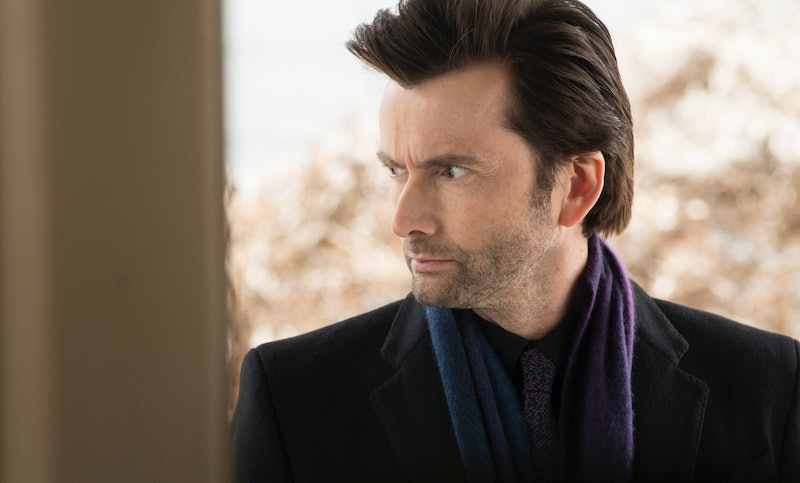 Jessica Jones' Kilgrave is one of the most sinister villains to appear on a TV series in a while. There's something about mind control that's so scary, and so invasive. His abuse of his powers gives Jessica Jones her momentum for the entire series as she tries to help another woman subjected to his torture. Even though he's a driving force on the show, was it the same in the comics? How does Jessica Jones ' Kilgrave compare to Marvel Comics' Killgrave? (Yes, the TV show decided to drop the extra "l" in the spelling of his name — it's the first of many differences.)

Like everything else comic book-related, the show's Kilgrave is a mix of the comics' conception of the character and show creator Melissa Rosenberg's own ideas. Still, Rosenberg had a lot to contend with. Killgrave is not only a character in Alias — the comic that launched the character of Jessica Jones — but he has a long history in the Marvel universe. It's clear he needs to function in a certain way to make the TV show work, so some changes were made. Here's how the comics' Killgrave stacks up against his television counterpart.

He's Much Older Than He Looks

Killgrave wasn't invented for Alias; he was repurposed. The first appearance of Zebidiah Killgrave was way back in 1964, when he was a villain in Daredevil. And yet, David Tennant's character doesn't look like he's in his 50s at all.

His Complexion Has Changed

Killgrave is also known as The Purple Man, and it's not just because of his stylish dressing. In the comics, his skin was actually purple all over. According to his origin story, Killgrave was a spy who, while investigating a chemical plant, ran afoul of some nerve gas that turned him his grapey color. That wouldn't really fly in today's more grounded MCU, so Kilgrave is allowed to keep a more normal hue to his skin.

Killgrave was actually Croatian in the comics, and was spying for the Soviets. I think it's smart for Jessica Jones to not bring that whole aspect into it. Even if they updated the Cold War-era bad-guy stuff, adding some kind of political dimension would just distract from the whole mind-control abuse that is so central and powerful at the heart of the show.

He's Not As Front & Center In Alias

In Alias, Jessica Jones is clearly haunted by her experience with Killgrave, and also suffers from PTSD. But most of the comics' run isn't about her quest to hunt him down. In fact, though he's referenced often because of what happened to her, he isn't really shown in the comic until at least three-quarters of the way through the series' run. Instead, Alias is mostly concerned with her other investigations.

More like this
What Working At Marvel Is Really Like, According To A 'Ms. Marvel' Co-Creator
By Gretchen Smail
Yes, Joseph Quinn Is Actually Playing The Guitar In This Epic 'Stranger Things' Scene
By Alyssa Lapid
Natalia Dyer Opened Up About Steve & Nancy’s “Lovely” ‘Stranger Things’ 4 Dynamic
By Grace Wehniainen
Vecna Officially Has A Fan In 'Stranger Things' Star Jamie Campbell Bower
By Alyssa Lapid
Get Even More From Bustle — Sign Up For The Newsletter