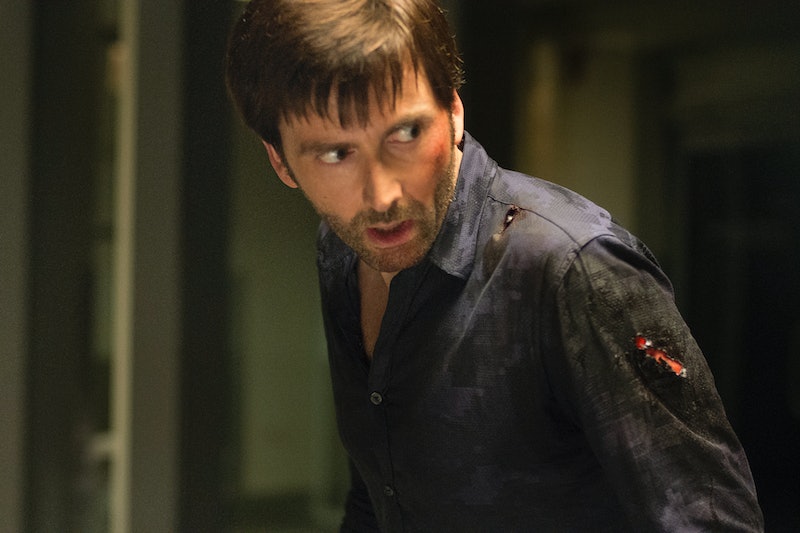 For every action, there is an equal and opposite reaction. For every superhero, that opposite reaction is obviously a supervillain. The world wouldn't need heroes if there weren't villains to save it from in the first place, amiright? So maybe Jessica Jones should be thanking Kilgrave for giving her a purpose in life. Or maybe not... While the titular hero of Netflix's new Marvel series probably won't be shaking her archenemy's hand anytime soon, viewers will probably be more grateful for his presence, given how deliciously evil he appears to be. But who is Kilgrave, really? Where did he come from, and what can he do?

While the version of the character played by in the Netflix series by David Tennant (Doctor Who, Harry Potter And The Goblet Of Fire) is credited simply as "Kilgrave," the original version of the character from Marvel Comics is named "Zebediah Killgrave" — but he's more commonly known by his villainous alias, the Purple Man. He predates his fiercest foe by quite some time; although Jessica Jones wasn't introduced on the page until a 2001 series titled Alias (no relation to the Jennifer Garner show), the Purple Man first appeared in an issue of Daredevil way back in 1964.

Back then, Zebediah Killgrave was a Croatian spy sent on a mission to a chemical refinery. While there, he was doused with a chemical that turned his skin purple. When he was able to talk his way out of being captured, he started to realize that his transformation had also given him the power to control people's minds. He soon moved to New York City and embarked upon a criminal career, robbing banks and building a name for himself, before he was beaten by Daredevil.

After his defeat, the Purple Man largely dropped out of Marvel Comics lore in the 1980s, only popping up occasionally in stories like Emperor Doom and X-Man. He re-emerged with a vengeance, however, when the Jessica Jones-centric series Alias began in 2001. Although that series picks up after the superpowered young woman has already retired from crime-fighting, her past is gradually revealed — including her clashes with Zebediah Killgrave.

It turns out that the Purple Man had kidnapped Jessica when she was operating as the superhero Jewel. He held her prisoner in a hotel room for eight months, and (in a particularly meta twist) convinced her that she was merely a character in a comic book. Eventually, having completely taken over her mind, he sent her on a mission to kill Matt Murdock — aka Daredevil. Fortunately, she failed in this task and was awoken from her brainwashed state by Jean Grey, who also implanted a psychic switch in Jessica's mind so she could never fall victim to his persuasion again.

In the main timeline of the series, the Purple Man escaped from prison to wreak havoc on Jessica's life once more. He terrorized NYC by mind-controlling large groups of people into committing unthinkable acts of violence. But when he finally confronted Jessica and attempted to brainwash her into killing an Avenger of her choosing, Jessica was able to resist and beat him to a bloody pulp.

It remains to be seen how closely Netflix's version of the character will hew to the version on the page. While what we've seen so far of the show in trailers hints that Jessica's history with the villain will remain mostly similar, there are also indications that Netflix is embarking on a new direction. First, there's the subtle change in spelling between between "Killgrave" in the comics and "Kilgrave" on the show; Tennant's iteration of the character is also never referred to as "the Purple Man" in any of Netflix's official promotional material or press releases. And then there's the small fact that Tennant's skin is decidedly not purple.

We'll find out just how closely Tennant's Kilgrave hews to Marvel Comics' Purple Man when all 13 episodes of Jessica Jones premiere at 12:00 a.m. ET this Friday. In the meantime, stoke the fires of your anticipation with this look at the show's main title sequence: