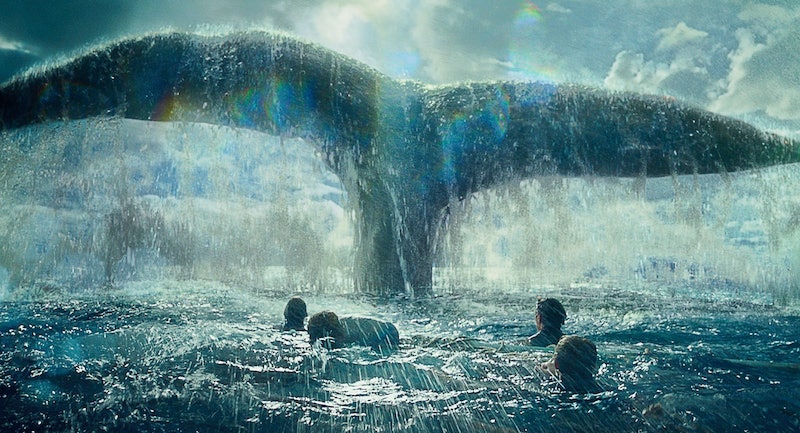 Despite a major release delay, In the Heart of the Sea is already making waves. The new movie, starring Chris Hemsworth, tells the story of a group of sailors who find themselves in unthinkable peril after their ship is capsized by a giant whale. The trailer alone is enough to make you swear off swimming in the ocean for good, showing the violent destruction of the ship by a palpably malevolent creature. But we all know that Hollywood has a history of making villains out of certain animals in a way that isn't realistic. So is In the Heart of the Sea based on a true story, or is it just another tool to terrify moviegoers?

If you were planning on going deep-sea swimming anytime soon, you may want to think again after watching the movie. In the Heart Of the Sea is based on real events, and the story was as creepy in real life as it is on screen. The tale is that of the whaling ship Essex, which was sunk by a sperm whale shortly after departing Nantucket for what was supposed to be a two-and-a-half-year voyage. Nathaniel Philbrick wrote a book based on the incident called In the Heart of the Sea: The Tragedy of the Waleship Essex , and it's upon this book that the new movie is based.

But wait, there's more! There was another book inspired by the Essex catastrophe, and there's a good chance you had to read it in 9th grade English. The novel is none other than Moby Dick , written by Herman Melville in 1851. Melville wrote the book after hearing the story of George Pollard Jr, who had been the captain of the doomed Essex. However, the main character in the book is a fictional ship captain, not Pollard himself. In the Heart of the Sea , on the other hand, features Pollard as the protagonist, and it also depicts other real-life members of the crew. An official synopsis released by the studio reveals additional crucial differences between the new film and Melville's story:

In the winter of 1820, the New England whaling ship Essex was assaulted by something no one could believe: a whale of mammoth size and will, and an almost human sense of vengeance. The real-life maritime disaster would inspire Herman Melville’s Moby-Dick. But that told only half the story. “In the Heart of the Sea” reveals the encounter’s harrowing aftermath, as the ship’s surviving crew is pushed to their limits and forced to do the unthinkable to stay alive. Braving storms, starvation, panic and despair, the men will call into question their deepest beliefs, from the value of their lives to the morality of their trade, as their captain searches for direction on the open sea and his first mate still seeks to bring the great whale down.

So basically, although the battle with the whale made up the entirety of the narrative of Moby Dick, in In the Heart of the Sea the whale attack is just the beginning of the story. The conflict then becomes one not of man versus beast, but of man versus his own moral fiber when confronted with a worst-case-scenario fight for survival. And it isn't pretty.

If your appetite for CGI carnage is effectively whetted, catch In the Heart of the Sea in theaters Dec. 11. And then give thanks that you're not a 19th-century sea captain.