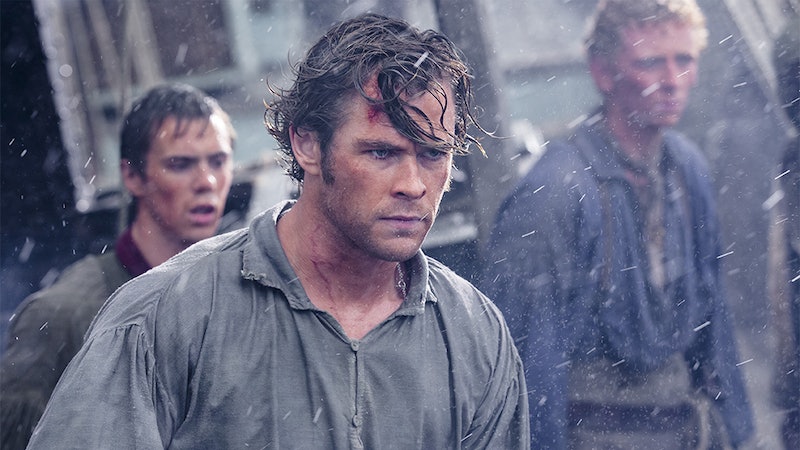 The last four months of the year are always fun for moviegoers. While summer is chiefly the domain of blockbuster action flicks and spring is, well, kind of humdrum, the months of September through December are when all the heavyweight awards contenders are released, along with a few highly-anticipated big-budget tentpoles like The Hunger Games: Mockingjay — Part 2 or Star Wars: Episode VII — The Force Awakens. Basically, there's a little something for everyone in the fall... and from the looks of the trailer for In The Heart Of The Sea , there's a little something for everyone in this whale of a tale, which apparently combines enviable Oscar pedigree with insane amounts of action, resulting in basically a nautical superhero movie.

In the column of awards bait, you have Ron Howard and Brian Grazer, the director/producer team behind such acclaimed films as Frost/Nixon, Apollo 13, and the Best Picture-winning A Beautiful Mind. You have a screenplay by Charles Leavitt, who wrote the Oscar-nominated 2006 film Blood Diamond, starring Leonardo DiCaprio. And you have a movie based on a true story, a genre the Academy always loves. In the column of crazy action, you have star Chris Hemsworth, an edge-of-your-seat trailer, and a killer whale. No, not an orca. A literal killer that's also a whale.

Here are nine moments from the trailer that prove In The Heart Of The Sea is basically a superhero movie in disguise:

Sure, Chris Hemsworth has played other roles. But he'll always be best known as the Norse god of thunder from the Marvel Cinematic Universe. Hemsworth looks to be doing just as many crazy stunts for this movie as he does for his Thor films, only his character this time — First Mate Owen Chase — doesn't have superpowers, which means it's even more impressive when he kicks butt.

Heart Of The Sea features 19-year-old English actor Tom Holland as the ship's cabin boy, Thomas Nickerson. In case you missed all the hoopla a few months back, Holland is most famous for being cast as the newest onscreen iteration of Peter Parker, aka your friendly neighborhood Spider-Man. He'll join the Marvel Cinematic Universe in next year's Captain America: Civil War — although Hemsworth himself will be sitting that one out as Thor goes off in search of the Infinity Stones.

As if two major superheroes in one movie wasn't enough, Ron Howard had to go and cast a major super-villain as well. Irish actor Cillian Murphy appeared in all three of Christopher Nolan's Dark Knight movies as the iconic and nightmarish Batman baddie Scarecrow. In Heart Of The Sea, he plays Hemsworth's second mate, Matthew Joy.

Hemsworth, Holland, and Murphy may be the only three cast members who have actually played comic book characters, but the rest of the cast is rounded out by actors with plenty of experience in action movies and/or popular sci-fi/fantasy franchises. There's Frank Dillane (pictured) of both Harry Potter (young Tom Riddle) and Fear The Walking Dead. There's Brendan Gleeson, also of the Harry Potter franchise (Mad-Eye Moody). There's Benjamin Walker of Abraham Lincoln: Vampire Hunter, Ben Whishaw of Skyfall and Spectre, and Michelle Fairley of Game Of Thrones.

S.H.I.E.L.D. has their helicarriers. The Guardians of the Galaxy have the Milano. Batman has his Batmobile. (And the Tumbler. And the Batpod.) Like the best superheroes, Owen Chase and the rest of the crew have their own iconic ship: the Essex, a real-life whaleship out of Nantucket, MA that was sunk by a sperm whale in Nov. of 1820.

Ah, yes. Every good superhero movie needs a good antagonist. And Heart Of The Sea's implacable and deadly sperm whale looks as evil and unstoppable as any of the best comic book villains. This proto-Moby Dick looks to bear a lot in common with the vengeful personalities of Thor: The Dark World's Malekith or Guardians Of The Galaxy's Ronan The Accuser.

Every superhero movie these days seems to end with the heroes facing off against an army of indistinguishable drones, often created in the villain's own image: The Avengers had the Chitauri, Guardians Of The Galaxy had Ronan's army of Kree soldiers, and Age Of Ultron had Ultron's robotic creations. Just like in those films, Hemsworth and co. will have to contend with a large group of mini-me whales before they finally battle their Big Bad.

For a movie about 19th century whaling, the two-and-a-half-minute trailer sure is packed to the gills with action. ("Gills." Get it? It's a nautical pun.) If the movie itself keeps up that level of intensity for all 121 minutes of its runtime, Heart Of The Sea will definitely be the most action-packed movie of the season outside of Panem and a galaxy far, far away.

Check out the trailer in all its superheroic glory right here: