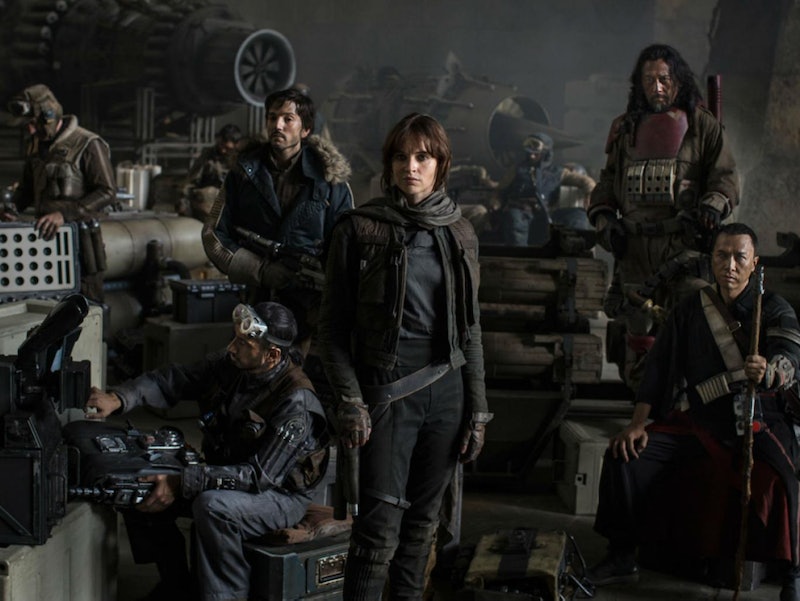 The Star Wars hype machine is in full swing, with the release of the first in the science fiction sequel series less than a month away. When I anticipate a movie that's going to change my life like another Star Wars, the come down from the build up can be a little dispiriting. But thanks to Lucasfilm, Walt Disney, and an aggressive schedule, the release of The Force Awakens won't start the clock on an extended wait for the next Star Wars film. Fans like me have been greedily accepting the tidbits slowly coming out of Star Wars HQ for this new era of the franchise, including the release date for Star Wars: Rogue One. In March of this year, the studio announced that the next Star Wars film to be released after The Force Awakens will be Rogue One and that it will make its theatrical debut on Dec 16, 2016.

A year doesn't sound like a short time, I know. But consider the precedent! OG Star Wars fans who saw Episodes 4-6 in real time had to wait a whopping three years between each film. Three years to see what Luke would do when get his late-stage paternity test results! Modern fans should consider themselves lucky to have a standalone Star Wars movie already chugging along in production. Here's what we know about Rogue One so far.

The Story Pre-Dates A New Hope

The studio offered this one-sentence synopsis to sum up the events of Rogue One: “A rogue band of resistance fighters unite for a daring mission to steal the Death Star plans.” Those would be the very same plans that Princess Leia smuggles out to Obi Wan via her R2 unit in A New Hope. With the Empire's ruthless grip on the galaxy in mind, the process of obtaining information so crucial to their defeat must have involved planning, skill, and casualties. Han, Luke, and Leia have hogged the credit for destroying the Death Star for way too long. Now these brave souls will finally get a piece of the appreciation.

It Stars A Cast Of New Characters

At this year's D23 convention, Disney disclosed Rogue One's prestigious cast list. Fair play to anyone who got this ensemble confused with the cast of an Oscar-bait drama. The Theory Of Everything star Felicity Jones, Milk actor Diego Luna, critical darling Ben Mendelsohn, and Hannibal's Mads Mikkelsen are just some of the talent involved. Like The Force Awakens, Rogue One is expanding the Star Wars universe to include a wider and more diverse population, and that's good news for the franchise staying alive in the 21st century.

...None Of Whom Will Use The Force

Director Gareth Edwards was clear in an interview with The Guardian: there are no Jedi in Rogue One . “It comes down to a group of people who don’t have magical powers who band together to bring hope to the galaxy," the director said. Remember that the remnants of the Jedi order are basically in hiding when A New Hope begins. So their absence makes canonical sense here.

When Jedi mind tricks are pulled from the equation, even a movie that takes place in an ancient, far off galaxy becomes more realistic. And in the sense of how battle and conflict are portrayed, Edwards' vision for Rogue One is different from the other movies in the franchise. In an official release, Lucasfilm president Kathleen Kennedy describes the film as pointing the lens at the "ground war" level of the rebellion, which is a micro-focus on military action that fans haven't seen before.

Rouge One is just the first in a planned series of Star Wars off-shoot films that will dig into stories beyond the main narrative of the episodic films. With unlimited ground (and space) to cover, success here means unlimited possibility for future adventures.