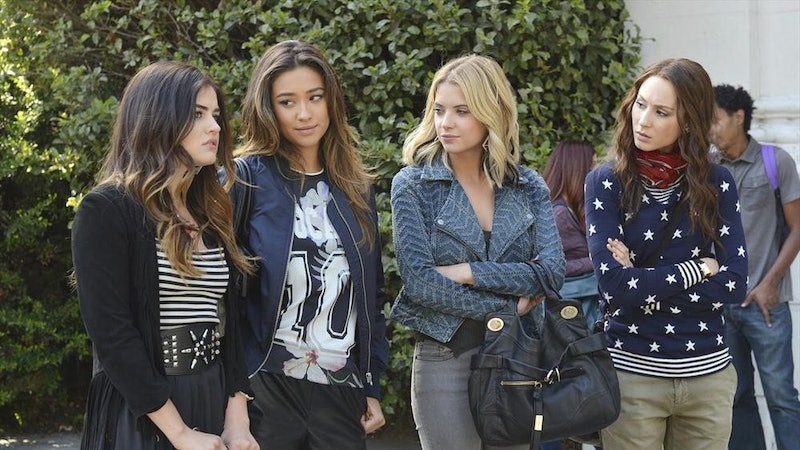 Tuesday is the night! (The night of the long awaited Pretty Little Liars flash forward special, of course.) While we are about to be hit with some answers, some behind the scenes footage, and some (hopefully) anecdotal stories about what it's like to work on the PLL set, one thing's for sure: this time jump is either going to be the worst or the best thing that's ever happened to this show. (All signs point to best, but you have to be reasonable about these things. Time jumps are tricky beasts. For reference, see One Tree Hill.) Among the things that need to be addressed during the special, something in particular has been weighing heavily on PLL fans across the nation (aka me), is what are the relationship statuses of the Liars?

Is Spoby no more? Is Haleb still a thing? The Liars have gone through so much romantically, and in just four years of high school! Imagine all the changes that have taken place in the past five. (I mean, I can't, but I'm trying.) Thankfully, E! Online had the opportunity to sit down with the cast to discuss the romantic lives of the liars. So. Much Was. Revealed. (Allr ight, we knew some of this, but still — it's important we go over it again before the special tonight. Here's the play by play.)

Aria's Status: In A Relationship

Lucy Hale explained to E! that Aria is "dating, and I want to say she's happy; she's in love. But there's always that you're never really sure if she's faking it or if it's real. But she's in a relationship." OK, so is this referring to Ezra or nah? I feel like nah because although Ezria was a rocky situation, Aria was never phony about it.

Spencer's Status: "Married To Her Career," Possibly on Tinder?

According to E!, Spencer is "married to her career," and "single." (RIP Spoby). Troian Bellisario even joked that Spencer might be on... Tinder? "She's experiencing a lot of Tinder. She's not even paying attention anymore, she's just always swiping right, like, ‘Sorry, what? I'm meeting someone at four for coffee? Can you speed it up?'" Currently wishing this was not a joke.

Ashley Benson and Shay Mitchell chose Hanna's ring together, telling E! that they picked "the biggest one." Since Hanna's been in New York, my gut feeling tells me this ring was not purchased by Caleb.

No particular comment. I wonder how she feels about Alison's new man?

Alison DiLaurentis. The only Liar with a happy marriage. Though, as we've learned from all these seasons, nothing is ever quite what it seems.

Honestly, I'm still stuck on the image of Spencer (and her bangs) on Tinder. Like, what do you think her bio would say? My bet would be "You know what they say about hope. It breeds eternal misery," but who knows?

Anyway, be sure to catch the flash forward special, November 24 at 8 p.m., and the season 6B premiere on Tuesday, January 12.