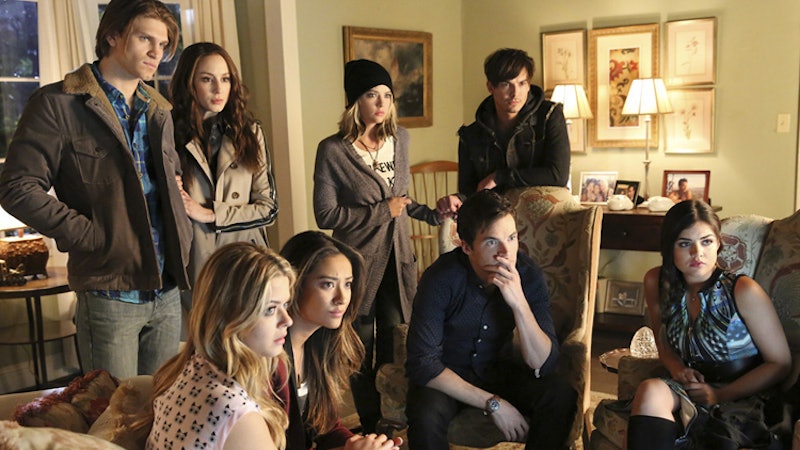 The catastrophically dramatic love lives of Hanna, Spencer, Emily, and Aria are part of the very fabric of Pretty Little Liars, and things are only getting more interesting as we hurtle towards the summer finale. With the Pretty Little Liars Season 6 time jump (and potential weddings it could bring, if we're lucky) looming just beyond the horizon, we've all got to wonder: Who's going to make the cut? Which Pretty Little Liars couples will survive? Who's going to get the ax? And will the time jump act as a sort of reset, or will everyone still be with their high school sweetheart five years from now?

As much as we'd all like that to be the case, at least one of the main 'ships has to be headed to the chopping block, right? At least temporarily, anyway. It's tough to say where we'll be by the end of Season 6A — after all, most of the Liars' respective romantic relationships are in something of a slump (especially if we're going by Spencer and Hanna's ever-so-slightly graphic conversation about dry spells). Caleb's gone all over-protective, things with Toby have been pretty touch and go since he joined the Rosewood PD (remember Spencer's liaison with Wren's Shakespeare-loving roommate?), Ezra's been cast aside for the time being (only to be speedily replaced, first with Andrew, and now possibly with Clark), and Emily's been single since Paige broke her heart.

With all of the major relationships in comparable states of disarray, it's pretty much anyone's game at this point — so let's break it down, and take a look at each 'ship's odds for smooth sailing.

We know PLL loves nothing more than putting its characters through the wringer — so let's make no bones about it, Hanna and Caleb are definitely going to weather their fair share of ups and downs throughout the final seasons of the show. That said, I'd say they might just have the best outlook. Maybe I'm just punch-drunk on all of the Haleb wedding spoilers (and baby spoilers) going around, but I really (really, really) think that they have a shot at the long haul.

I mean, they have to, right?

I hate to say it, but I think Aria and Ezra are endgame too, unless Ezra turns out to be Charles, that is. (Though wouldn't it be the absolute coolest if our two favorite A theories had a baby, and it turned out Ezra and Aria were both A the whole time? It would be sheer madness in the best way possible.) Crack theories aside, I'm willing to hazard a guess that they'll spend the time jump apart. Based on the recently cast new characters for Season 6 reported by TVLine, it looks Ezra's going to get some serious competition. Eligible bachelor #1 is an editorial assistant, and eligible bachelor #2 works in the fashion industry — both sound like perfect love matches for Aria, especially since it's looking more and more like she's going to end up with a career in fashion photography.

It might get touch and go for a while, but even if they end up calling it quits and getting into serious relationships with other people, I think it'll be more a part of their on again, off again cycle, rather than something permanent. I'm personally not an Ezria fan, but there's no denying the fact that it's the 'ship that launched the show — and I think they're here to stay.

Spoby's been in a prolonged rough patch ever since Toby joined the Rosewood PD and since I don't see him leaving the force anytime soon, I'm guessing their relationship will continue to bear some strain. There's certainly no denying the fact that Spencer and Toby have had their moments throughout the course of the series — but out of the show's main 'ships, I'd have to say that they're the most likely to break up (permanently, that is). Now, don't get me wrong, I'm actually a Spoby fan more than I am an Ezria fan. I just don't think that their connection has been played up quite as much as the other two mainstay relationships on the show, and they've been drifting apart for quite some time now.

Plus, who knows? Toby might end up being A.

Emily's two major endgame prospects at the moment are Paige and Alison — though things haven't been looking good on either front lately. We haven't seen Paige since she took off for California, and a reunion in the near future isn't looking all that likely. As for Ali, we pretty firmly got the kibosh on that one, too — so what gives? Could either of them end up being Emily's one true love?

It's also worth noting that many fans are theorizing that Emily might end up with Sara Harvey — after all, Oliver Goldstick hinted to Entertainment Tonight that she had a "soul mate" that was "closer to her than she ever thought." Could he have been referring to Sara, who is, in the literal sense, currently as close as someone could physically get? Given her sketchiness, let's really hope not. Besides, I don't think any of us want Sara sticking around until Season 7.

Last but not least, there's Maya to consider: Many fans aren't entirely convinced that she's actually dead, so who knows when she might pop up in Rosewood again — and if she does, could she rekindle things with Emily? Emily's love life is all up in the air right now, so who knows she'll end up with. If I were a betting woman, I suppose I'd put my money on Paige — but then again, it's a difficult call.

If you're feeling stressed about post-time jump romance, just remember that when Entertainment Tonight asked I. Marlene King about wedding bells, she replied, "There are some engagement rings flying around when we come back for the premiere." Freaking out at the idea already? Don't worry, so are the hosts of Bustle's Pretty Little Liars podcast. Check out what they have to say below.

More like this
These 2 Tragic ‘Stranger Things’ Finale Moments Were Improvised By The Actors
By Grace Wehniainen
What’s New On Netflix: Lana Condor’s Ghostly Comedy & A Sexy Reality Series
By Arya Roshanian
Jesse Tyler Ferguson Had A Funny Run-In With A Fellow ‘Modern Family’ Alum
By Grace Wehniainen
'Stranger Things' Cast Thinks It's "OK Not To Label" Will Byers' Sexuality
By Alyssa Lapid
Get Even More From Bustle — Sign Up For The Newsletter