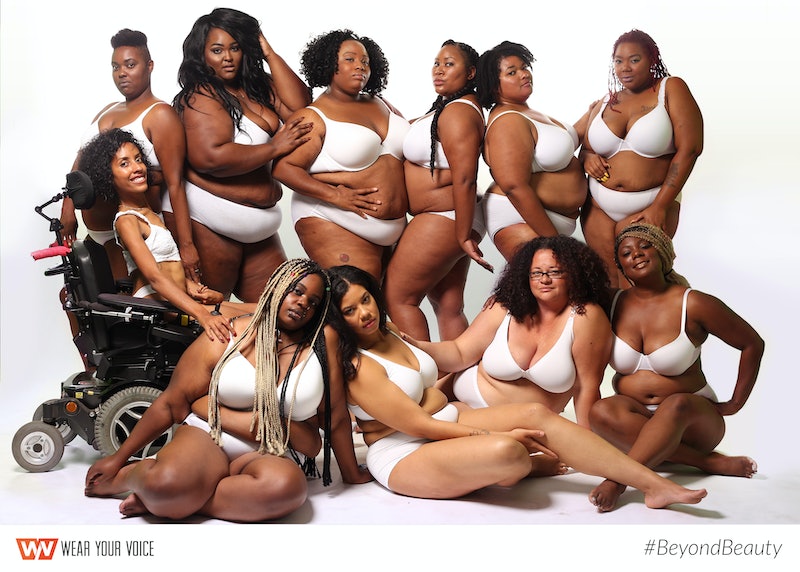 On Nov. 22, Wear Your Voice Magazine launched its #BeyondBeauty campaign on Facebook. Even from first glance at photographer Elena Kulikova's images, it becomes immediately clear that this campaign has a full understanding of what body positive imagery should look like in order to truly be inclusive.

The images feature 18 women of all shapes, sizes, gender expressions, abilities, and colors. Many of us know that images have the power to determine how we define beauty for both others and ourselves. Body positive photo campaigns are just one way that individuals are coming together to challenge what is considered beautiful. And Wear Your Voice Magazine wants to shift the conversation beyond the aesthetic.

It's no surprise that a campaign like this came from Wear Your Voice when you consider the publication's past work. The magazine's Editor-in-Chief and founder Ravneet Vohra describes the magazine to me via email as a "hub for activism" and a "space that continues to disrupt media and challenge the status quo." Founded in Feb. 2014, Wear Your Voice is no stranger to tackling body shame and creating its own counter narrative. Its summer #DropTheTowel campaign shed light on trans men's body positivity and food shaming, while #KillTheSilence worked to put an end to victim blaming.

Vohra points out that while the Internet can be a negative tool (in no small part thanks to Internet trolls) it can also be used in a positive, powerful way. #BeyondBeauty is the next step in the magazine's mission to challenge the status quo and bring increased visibility for those so often left out of mainstream media.

The campaign tackles beauty standards head on by posting "before and after" shots in which the models' bodies don't change, as well as photos that pair together supposedly contradictory terms such as "fat" and "fit" and "flawed" and "flawless." The images have not been Photoshopped or edited, and all of the models are wearing basic white lingerie in a show of statement-making simplicity.

"We get bombarded with images every day of what society says we should look like," plus size model Saucye West, who participated in the shoot, tells me via social media. "We get told that we are unhealthy, immobile, disgusting, and not worthy. People need to see that despite what society says that we will stand proud and love who we are without apologizing for it."

In Wear Your Voice's article about the campaign, writer and campaign creative director Rachel Otis highlighted what makes #BeyondBeauty different from other similar efforts. "We are daring to look beyond this traditional and limiting idea of 'beauty' to see the strength that not only lies within, but that exudes from all," she wrote. "We have stripped away the commercial by expanding upon it, in order to present the raw essence of self, reflected in each and every one of our diverse models."

When body positive campaigns only feature white or white-presenting cis-gender women under a size 16, they can often make people who don't fit those narrow categories feel left out of the conversation. "I want people everywhere to know I see you," Vohra adds. "For me, intersectional feminism is not one color, size, ethnicity, or sexual identity."

As for Saucye West, she is no stranger to modeling, of course, but she tells me that this shoot was very different from her previous work.

"Being in the industry, you hear very often plus size women talk about their imperfections," says West. "No one was complaining about their bodies. No diet talk. We were there and united."

West also called the shoot one of the most important ones of her career — a sentiment that Vohra echoed:

"For me as founder of WYV it was one of the most defining moments in WYV history, and there have been many of these. We are fortunate enough to have tapped into a market yearning for more exposure, people who look for authenticity from a media publication. This moment for me was mind blowing and made me so emotional. On a personal level, all my body issues were so apparent, and I was genuinely moved and inspired by seeing so many women owning the body they are in. The love shared in that studio that day is what one gets when women come together and support one another."

#BeyondBeauty also launched shortly before one of the biggest shopping days of the year for a very specific reason.

"With Black Friday soon approaching, we can only anticipate the amount of body shaming ads that brands will invest millions into," Vohra tells me. So she wanted to remind people that "confidence is something that cannot be sold to you." And that we each have the ability to define beauty on our "own terms."

This shoot is just the beginning of the campaign. Vohra wants to keep the conversation going and invite folks to share their own photos, selfies, and stories with the hashtag #BeyondBeauty.

If we want to change the mainstream conversation about what is considered beautiful, we sometimes have to be the ones who talk first. And if we want to see more inclusive representation in body positivity, we have to share and support those willing to give it to us.

More like this
10 Stylish Plus-Size Boots That Will Fit Wide Feet & Calves
By Dominique Norman
Here Are All 703 Outfits Rachel Wore On Friends
By Kat George
The 12 Best November 2022 Beauty Launches, According To Our Editors
By Rachel Lapidos
This Scandi Beauty Brand Is Basically Hygge In A Bottle
By Justine Knight
Get Even More From Bustle — Sign Up For The Newsletter