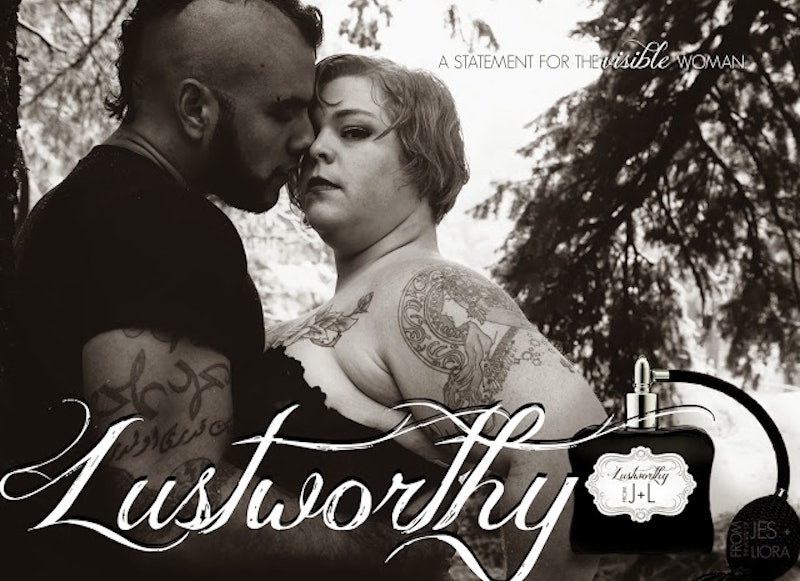 When I think of the term "body positivity," my mind often conjures up images of fat, unapologetic ladies doing their thing and giving no effs about it. But the thing about body positivity is that it's about way more than fat women. And this is something that body-positive photo shoots generally serve to remind us of.

Whether their focus is on fat bodies, queer bodies, bodies of color, disabled bodies, or everything and anything in between, the beauty of photography as it applies to the fight for inclusivity is that it seems to enable so much diverse expression and representation. There are arguably few things in this world which can cause us to stop and think as quickly and as intensely as a striking image. And it's that urge to make people stop and think that is at the core of most body-positive photo shoots and campaigns.

Most millennials have grown up seeing one principal body type represented in the images they consume: thin, able, cis, white bodies. Despite the beauty these bodies possess, however, having one is simply not the only means to a fulfilled existence in this world. As well as highlighting that there does exist beauty in every form and color and shape and gender identity, these 11 body-positive shoots highlight that one of the most beautiful things we can strive to be is inclusive.

Photographer Substantia Jones of The Adipositivity Project is known for her photographs of fat (often naked) bodies. Each year, she puts together a calendar that is a compilation of some of her most striking images from the 12 months before. Although the 2016 Adipositivity Calendar is not technically a single shoot, it does serve as a single series of sorts.

What's so striking about these images is that Jones shoots fat bodies in traditionally "unflattering" poses. It's not uncommon to see slender humans contort and mold themselves into unusual forms for editorials. But fat people? Not so much. Along the way, Jones debunks the myth that fat individuals can't look breathtaking unless they are posed to appear slimmed down. She fights the idea that fat individuals can't feel sexy or be sexual. Further still, she debunks the myth that there is a "right" or "wrong" way to have a body.

What happens when the editor in chief of one of the most inclusive fashion mags in the world shoots one of the fiercest activists in the body pos community? Nothing short of magic, obviously. For the Rebel issue of Volup2 , model, photographer, and editor Velvet d'Amour captured activist Harnaam Kaur in an editorial shoot that can be described as ethereal whimsy.

Kaur made headlines in June 2015 after shooting for Rock N Roll Bride Magazine. Like millions of other women in the world, Kaur suffers from Polycystic Ovarian Syndrome (PCOS), which has led to heavy hair growth on her face. Rather than hide from the judgmental eyes of society and the general cruelty of human beings, Kaur is incredibly active as a model and activist, building a serious platform online where she can inspire people by the thousands. This shoot proves that difference — no matter how different it actually may be — is remarkably stunning.

3. Ready To Stare's "Thank You For Staring"

When Ready To Stare designer Alysse Dalessandro moved her Etsy shop to a full-fledged e-retail site, she inaugurated the new page with the "Thank You For Staring" lookbook. The body positive and fat positive T-shirts she designed were a response to her experiences as a visible fat person on the Internet, who subsequently receives a ton of online harassment simply for existing.

The beautiful thing about this shoot was the inclusivity. Plus size individuals of varied shapes, sizes, colors, and styles all got to be up front and center, not one person more or less represented than the other. The fashion industry has historically been pretty shit at diversity, so being able to see women of color, fat women, and fat women of color in one single shoot was certainly a beacon of hope for what's to come.

Activist Jes M. Baker of The Militant Baker is known for a lot of things: A killer and hard-hitting blog, an amazingly radical book, lectures on body politics given the world over, and the ability to organize one hell of a photo shoot. In Dec. 2013, Baker released a series of "ads" with photographer Liora K. As she wrote in the blog post accompanying the set of photos for "Lustworthy: A Statement For The Visible Woman:"

Never in our culture do we see sexy photo shoots that pair nontraditional bodies with traditionally attractive models. It's socially acceptable for same to be paired with same, but never are the different types of bodies positively mixed in the world of advertisement [...] The juxtaposition of uncommonly paired bodies caused viewers to feel uncomfortable [...] This negative reaction is largely attributed to companies that capitalize on the thought that atypical bodies are not attractive, desirable, or lust worthy. This is inaccurate, and the only way to shift the way we view ourselves is to repeatedly counter exclusionary imagery with positive inclusive imagery.

For these photos, Baker posed in all her fat glory beside a man whom most would likely consider conventionally attractive. This wasn't about proving to the world that she is beautiful. It wasn't about saying, "Look! A man finds me sexy." It was simply about trumping the notion that fat bodies are unworthy — be it unworthy of love, of feeling desirable, of being catered to, of having great sex, of existing in peace, or of self-love.

In Oct. 2015, menswear brand Dressmann released its "Underwear for Perfect Men" ads. Although there are vocal men in the body positive movement, the community has up until this point been largely centered around plus size women. The truth, however, is that body positivity is for all bodies. The focus is often placed on marginalized bodies, of course, but men experience body image issues as well, and this isn't something to be ignored.

I love that by deeming the photo shoot one for "perfect men" while simultaneously showcasing men of various ages and sizes, Dressmann essentially toyed with the notion that "perfection" is subjective, if not entirely fabricated.

Designer Mallorie Dunn of Smart Glamour is constantly orchestrating photo shoots which serve to diversify the industry and highlight the importance of inclusivity. From #MiracleMomBods to #AllBodiesAreGoodBodies, her images always send a message that the fashion industry at large needs to hear.

In Aug. 2015, Dunn released the #SameSizeDifferentEyes campaign and photo shoot, which served to highlight just how arbitrary sizing actually is. By posing side by side models of different body types who both technically wear the same size, she proved that the number in your dress is pretty meaningless. #SameSizeDifferentEyes was about taking focus and brain power away from sizing and onto the way a garment makes you feel.

In April 2015, Lane Bryant released its controversial #ImNoAngel campaign, which showcased five plus size models of very similar hourglass proportions as an effort to combat sizeism in the fashion industry. As a response, and due to LB's lack of size diversity in its campaign for diversity, professional writer and body pos blogger Amanda Richards stripped down to her undies for her #ImNoModelEither shoot.

Richards shared photos of herself from various angles, radiating unapologetic love for her body from start to finish — stretch marks and not-flat tummy included. In her post, she acknowledged her privileges as a "white, young, able-bodied, cis-gendered" woman. But she added, "The only difference [between myself and the women in Lane Bryant campaigns] being that the fat on my body isn't as 'correct' as theirs. No, my body isn't proportional. No, my stomach isn't flat. Yup, I've got stretch marks. Yup, my one boob is smaller than the other, and I'm not particularly busty for my size. No, my skin isn't even or smooth." Ultimately, she was fighting for diverse representation of the myriad ways there are to have a body.

What's even more striking than Richards' photos is the solidarity they bred in women across social media, who took to Instagram with the #ImNoModelEither hashtag, and shared images of their own.

UK retailer Debenhams' spring 2013 campaign went above and beyond what we see most big-name retailers doing in the diversity department. The brand shot with an amputee model, a model born without a forearm, models of color, plus-size models, and models over age 40 (one nearing 70) for a shoot that brought multiple types of marginalized bodies to the forefront.

Much of the body positive community works online, and it very often feels like it's the indie retailers putting the most resources into helping the cause. For this reason, Debenhams' shoot made it feel like body positivity was infiltrating the mainstream in a big way.

Earlier this month, LGBTQIA+-geared lingerie boutique Bluestockings released a body positive and trans-inclusive photo shoot. As part of a lookbook, this set of images featured a plus-size model, a model of color, a gay couple, a trans model, and more, making for one the most queer-friendly shoots orchestrated by a retailer in recent years.

When we talk about body positivity, queer bodies are unfortunately often left out of the conversation. But Bluestockings made sure to prioritize diversity in regards to gender and sexual identity, making for one extremely inclusive final product.

Although we're arguably beginning to see more body representation in the fashion industry, the beauty industry has kind of been lagging behind. Seriously, MAC's 2015 "MACnificent Me" campaign was probably the first time most of us ever saw a plus-size woman modeling lipstick. LUSH Australia's Go Naked Campaign, however, sought to bring that body diversity to the world of shower gels and bath bombs.

Unfortunately, the Australian Advertising Standards Bureau (ASB) ultimately banned the ads after several complaints from mall shoppers who felt the images were too inappropriate for the general public. The news sparked many unanswered questions. Would the same have been true if the models were more slender? Why are lingerie ads generally deemed acceptable for the mall, when this was not? Regardless, LUSH brought body positivity to the world of beauty in a series of photos that represented many a different body type. And that was nothing short of radical.

For its 2015 swimwear lookbook, ModCloth released a set of photos featuring its employees modeling some incredibly cute swimwear. The ladies were a perfect embodiment of the diversity ModCloth preaches. They helped prove the simple fact that every body is a beach body, and everybody thus deserves to feel confident, cute, and at ease in their swim trunks.

The idea that "a photo can speak a thousand words" is heard the world over. Like many commonly-uttered quotes, it sometimes starts to lose its meaning. These sets of photo shoots and campaigns, however, shed light onto why that mantra must have originated in the first place.

The images we consume day-to-day undoubtedly hold control over our perceptions, whether we realize the depths of that or not. If we've only been presented with one standards set of images — one standard set of bodies — it makes sense that we'd begin to develop one single definition for "normal." The great thing is that even if it's our images that have gotten us to this point of "aspirational beauty wishing" to begin with, it's our images that can take us away from that.