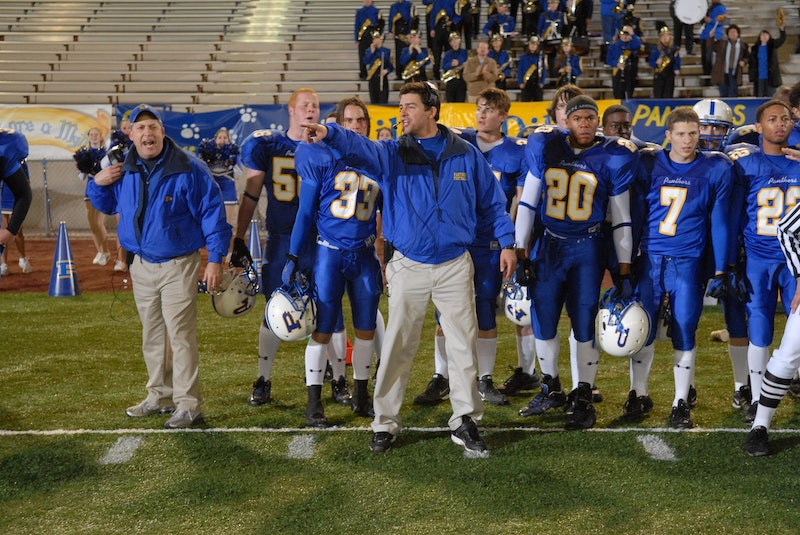 I know nothing about football, nor do I know anything about growing up in a small football obsessed Texas town, but I do know that I love Friday Night Lights and have an equal love for musicals. So the announcement that there's a Friday Night Lights musical coming in 2016 is beyond exciting. To explain why, let's start at the beginning of why FNL has the potential to be a perfect musical; it features a damn cool feminist icon (all hail the goddess Tami Taylor), a hot mess of a dreamboat desperately trying to win the affections of the school sweetheart (Tim Riggins, swoon) and intense moments of sporting drama alongside even tenser moments of personal drama, all scored by a winning soundtrack.

So it seems like sort of a no brainer that the geniuses behind The O.C musical have announced that they're developing this Friday Night Lights slice of musical joy. Adding exuberant kindling to the over-excited fire that is currently my heart is the news that Scott Porter (who played Jason Street) will be joining the musical to play none other than Coach Eric Taylor. You guys, I am freaking out over this, and I have my fingers crossed that it'll be done right. There are so many integral moments of Friday Night Lights which just have to be included in the musical and most importantly, turned into musical numbers. I already have my ideas set in place.

After the Panthers' star quarterback breaks his back on the field at the very start of the season, Coach Taylor delivers one hell of an inspirational speech to his despondent, emotional team. "We are all vulnerable, and we will all at some point fall," he tells them. "It is this pain that allows us to look inside ourselves." Add music to this and you have yourself absolute musical gold.

In a groundbreaking episode which dealt with teenage pregnancy in a realistic, honest manner, Tami Taylor tells the conflicted Becky that she won't go to hell for having an abortion and that whatever she decides to do — keep the child or terminate the pregnancy — will be the right thing to do, so long as it's her decision.

After Assistant Coach Mac MacGill makes some ignorant comments regarding black football players to the press, Smash Williams encourages the black players on the team to sit out every game out until the coach is fired (putting his, and the other players, college scholarships and futures in direct jeopardy as a result). His mum wisely tells him that "quitting football to make a point about racism in a small Texas town isn't "the Million Man march" and persuades him to rejoin the team in order to prove the "Mac MacGills of the World" wrong.

4. Landry Killing A Man To Save Tyra

Landry and Tyra are by far my favorite Friday Night Lights couple (aside from Coach Taylor and Tami, of course!), and though the course of their relationship was rocky, Landry unwittingly proved how much he loved Tyra when he managed to save her from an attack by the rapist who assaulted her previously. In what proved to be a tense, ongoing plot line (Landry's dad was on the police force! Tyra had a bad reputation!), the adorable twosome were brought closer together while trying to cover up the murder.

And so continues the great, rocky love affair of Tyra and Landry! While trying to arrange a romantic trip to State Championship for themselves, the couple end up picking up Tyra's mom and sister, as well as Matt Saracen's grandmother and Lyla Garrity. What continues is absolute comedy gold, with Landry watching his romantic dreams go up in smoke while also being pitted against a car full of excited women who don't sugarcoat their conversation topics.

6. Jason Street Returning To The Field For Homecoming

So emotional, I almost can't bear it. The brief silence which precedes Jason Street's first return to the field since his horrifying accident before the crowd erupts into a glorious uproar of support absolutely kills me. That's the kind of magic which was made to be put to music.

Tony Lucca's cover of the spectacular Daniel Johnston song (FYI: the original is one of my all time favorite songs ever) perfectly scores a wonderfully end of season montage full of celebration of victory against the odds. They have to get this song in somewhere.

But there also definitely needs to be space in the musical for a deeply awkward Christian speed metal interlude. Landry's Christian Speed Metal Band (Crucifictorious) is one of my favorite and most bizarre sub-plots of any TV show ever.

"Don't smirk at me right now! I am very upset!" Tami's painfully honest sex talk with her daughter Julie is the sort of thing that I'm sure many of us would have like to have heard when we were 15. Though she starts off a little unsteady, the speech comes into its own when Tami warns her daughter not only of the physical ramifications of become a sexually active woman, but also of the psychological dangers: "What can happen is that you can be hurt. And you can be degraded. And you can become hard and you can become cynical and I don’t want that to happen to you." Spot on.

Like many of the characters on the show, Saracen had a difficult relationship with his father. When his dad dies in Season 4, he's understandably distraught, leading to a painful dinner with the Taylor family in which he finally breaks down over it. In a moment which requires multiple tissues (and maybe some comforting scoops of ice cream on hand), Saracen delivers a heartbreaking, unintentional eulogy of a man he both loves and despises.

11. Tim Riggins Going To Jail To Save His Brother

Tim Riggins is one of the greatest self-destructive antiheroes (with a heart of gold) in television history. Though he managed to blight every good deed he every committed by being a ruthless womaniser and a careless partier, his decision to take the fall for his brother Billy's crimes is an incredibly touching and honorable one. His reasoning? Billy had a baby who needed a father. I love you, Tim Riggins.

12. Tami Taking The Reigns On Her Marriage

In the finale of the show, Tami considers taking an offer to become a college Dean of Admissions in Philadelphia. While her husband thinks over his own future, she delivers some powerful real talk that we can all take some inspiration from: "I have been a coach's wife for 18 years — I don't see why we can't look at something else beyond football." I'll drink a Tami Taylor portion of wine to that!

The Panther team motto would make the greatest chorus number, ever. Obviously.

I mean, there obviously isn't a musical in the world long enough to incorporate this much drama and awesomeness into its repertoire, but I'd like to believe that the Friday Night Lights musical will at least give it a good shot. They can't go wrong with the right song (and team motto) in their hearts, after all.