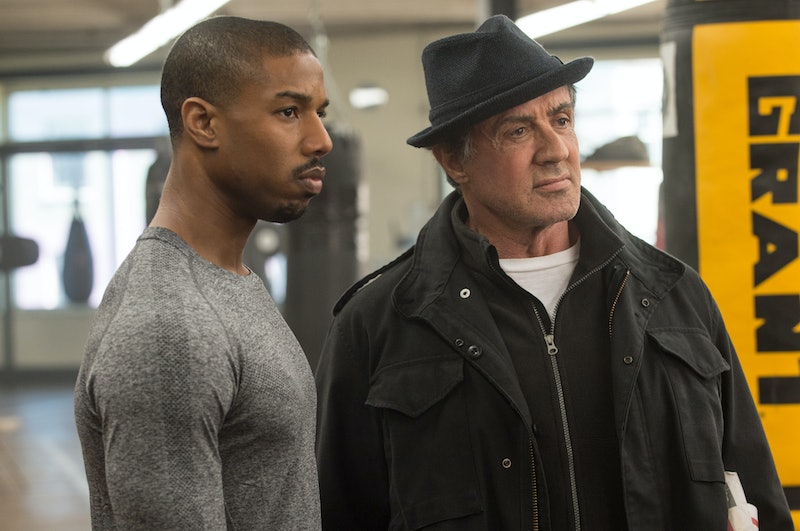 Fans of the original Rocky franchise will be thoroughly satisfied (and possibly teary-eyed) in the spin-off film Creed directed by up-and-coming director Ryan Coogler and starring Michael B. Jordan, Tessa Thompson, and the one and only Sylvester Stallone (if none of these people get an Oscar nomination for their work, then the Academy seriously needs to reevaluate their decision-making process). Jordan steps into the role of Adonis Johnson who is the son of the late, great boxer Apollo Creed (a role originated by Carl Weathers in the franchise). Returning in the role as America's ultimate underdog with a heart of gold is Stallone as Rocky — but where are some of the other familiar faces from the original Rocky franchise? More importantly where's his roommate and BFF Paulie Pennino? Unfortunately, he is dead in Creed — but how did Paulie Pennino die? The movie gives us many answers, but as far as Paulie's death is concerned, it's a mystery.

The movie focuses on the young boxer, Adonis, his relationship with Rocky and how Creed brought them together. The movie is in the Rocky cinematic universe, so it would be totally unfair to the audience if some of Rocky's history was left unmentioned — and that history includes Paulie.

Paulie, played by Burt Young, is an integral part of the franchise. Ever since the very first Rocky in 1976, he has been by Balboa's side and his corner man during his matches. He is the originator of that iconic boozin', abrupt and cynical sidekick character that we see in movies today. The way he fit into Rocky's life was very interesting. On one level, he was a frenemy. He talked trash to Rocky's face, treated people like crap, was negative about life, was a drunk, and made poor life choices throughout the entire course of the franchise. He really doesn't seem like a guy you'd want to be around. But above all this, he was always loyal to Rocky. He was the ultimate frenemy.

He's loyalty to Rocky was shown best during Rocky II when he was yelling at Adrian (his sister, Rocky's wife) about how she should have more faith in Rocky and what he was doing with his career. Sure, his yelling caused Adrian to go into labor, but at least he was standing up for his boy — and against his own sister! Now if that's not a ride or die homey for you, then I don't what is.

Burt Young appeared as Paulie in all movies all the way up to the 2006 reboot in Rocky Balboa (which would be considered Rocky VI if you're keeping count). This movie takes place 16 years after Rocky V and lots has changed. Adrian has died from cancer four years prior, Rocky Jr. is all grown up and Rocky is getting back in the ring. As for Paulie, he's back at work at his meatpacking job and is still Rocky's cornerman when he fights.

You would expect for Paulie to show up in Creed, but alas, he doesn't. There is one scene in the movie when Rocky visits Adrian's grave. Right next to it is Paulie's grave with his death dated at February 2012. No one mentions how he died, but considering his alcoholism and age, I am going to guess it had to do something with that — but that is neither here nor there. Perhaps it was just his time to move on from the story and that is how it was written in the script.

Coogler could have created a new character to replace Paulie, but he was smart not to. Because there is only one Paulie and he is irreplaceable.