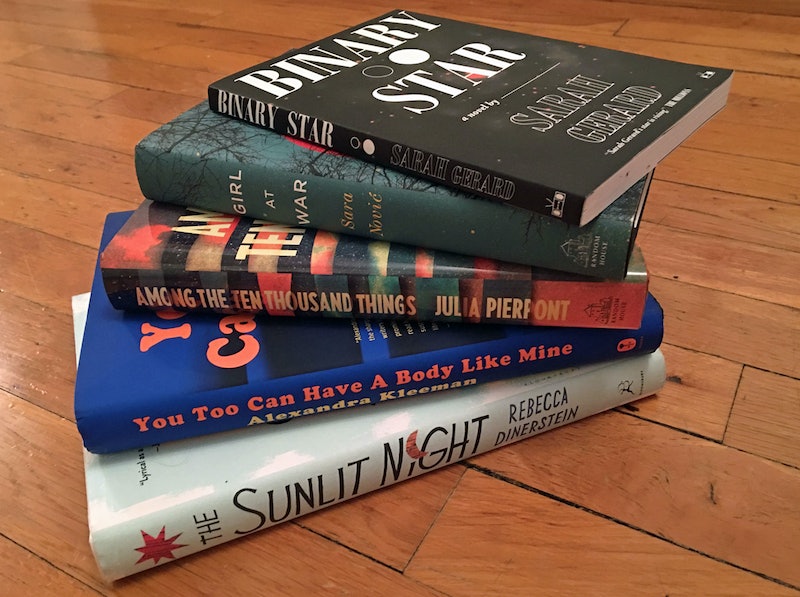 The books I look forward to most each year are the debut books: nothing surpasses reading something by a new author and knowing how hard he or she probably worked to get that very first work in print. 2015's best debut books are a fantastic list — new authors absolutely delivered this year. And if you somehow missed any of the titles I'm going to talk about below but love discovering voices publishing fiction for the first time, tuck away this list for your next bookstore trip and support these incredible authors.

Oh, before I get going, I'm going to cheat a little. There were a few first publications that really deserved some real estate on this list, but I couldn't include everyone I wanted to. So, massive, huge, whopping honorable mentions to the following novels, which should 100 percent be on your radar as well: The Fishermen by Chigozie Obioma; All That Followed by Gabriel Urza; and The Unfortunates by Sophie McManus. Lots of love to those books, and, of course, these 10 below, which have started these authors' literary careers with a bang:

1. Girl At War by Sara Nović

The imagery vividly rendered in Sara Nović's debut has stuck with me since I read it months ago. Girl At War tells the story of Ana Jurić as she struggles to remember, recover, and reconcile with her past in war-torn Croatia, which she fled for the U.S. when she was just 10. The novel's language is beautiful, and Nović handles the devastating subject matter masterfully. What's most impressive, however, is the book's alternating time structure, giving nod to the selectivity of memory — a sophisticated and powerful storytelling tool.

I'll put money down that Sarah Gerard's slim Binary Star is unlike anything you've ever read: rhythmic, immersive, entrancing. Although the premise is simple — an astronomy teacher with an eating disorder takes a road trip with her alcoholic boyfriend — so much agitates below the surface. Binary Star reveals more about human nature, particularly our own impulses to act and self-destruct, than books five times its size. And, for the record, I had to reread the ending to make sure what actually happened happened.

Not only do I think this book is one 2015's best debuts, I think this is one of 2015's best, period. Matt Sumell's Making Nice, a novel in connected stories, follows arrested-development thirtysomething Alby as he returns back home after his mother's death from cancer. There are bulldogs, severed legs, men overboard, and fist fights. With an astounding balance of wit and grace, Sumell manages to mine emotional depth through his stories, which is made all the more impressive as he does so through a character who seems entirely inaccessible on the surface. Plus, it's so funny, your gut will hurt.

4. The Sunlit Night by Rebecca Dinerstein

I still feel warm every time I think of The Sunlight Night — it has a beautiful, lingering effect long after you close the book. Telling the tale of Frances and Yasha, who through a chance set of circumstances meet at the top of the world, The Sunlit Night's love story is the kind that flourishes as it unfolds, especially guided by Dinerstein's hand. Her prose is airy and effortless, and her story simply one to celebrate.

5. Among The Ten Thousand Things by Julia Pierpont

That this beautifully developed work is a debut novel is quite a feat. Constructing her narrative through vignettes in four voices, Julia Pierpont shows incredible chops as she authentically inhabits the heads of a preteen girl, a teenage boy, and two fortysomething parents navigating the infidelity that splits apart their New York City family. What's most puncturing about the book, however, are Pierpont's observations about the world. Her razor-sharp perspective reveals deep truths about everything from the mundane to the big-picture that cut deep — and, OK, moved me to tears. In public. On a plane. Scaring the woman in the seat next to me.

6. You Too Can Have A Body Like Mine by Alexandra Kleeman

How brilliantly strange Alexandra Kleeman's You Too Can Have A Body Like Mine is. This heady book follows a girl named A, her friend named B, and her boyfriend named C — and the odd twists their somewhat droning, ghostly lives take. People disappear, pornography plays in the background, a supermarket chain becomes an obsession. Although Kleeman's plotting and characters are somewhat purposely evasive, one common thread weaves through: a searing social commentary on the impersonal, image-driven structure of modern society, as well as the distance we place between those in our lives and even ourselves. She's the kind of author whose brain you'd just love to pick.

7. The Hopeful by Tracy O'Neill

I still have figure skating medals from my childhood hanging up on the walls at my parents' house, but even if you don't, it's hard not to love The Hopeful. In Tracy O'Neill's story of Ali, a 16-year-old skating prodigy, whose fall leaves her talent and dreams compromised, the author writes the definition of a page-turner. O'Neill's knack for detail is mesmerizing, pulling you into the brutal, fragile world she creates, and the urgency of her world made this book impossible to put down.

8. The Turner House by Angela Flournoy

Family is a tricky subject to tackle — how fragile, how fraught — and few narratives have approached it with as much grace as Angela Flournoy in The Turner House . She writes the story of the large, Detroit-based Turner family, who are being forced out of the house on Yarrow Street in which they've built a 50-year legacy. Sure, his may be a debut novel, but Flournoy proves her command of not only on language but also humanity. She understands how to knock down the walls people naturally put up to tell the intimate, human stories we crave from the best fiction. This will move you.

Tanwi Nandini Islam's Bright Lines' soul derives from its density: there's Bangladesh, Brooklyn, botany, sexual awakenings, hallucinations. What's so incredible about Islam's work, though, is how it plays with the concept of "home" — both how her characters contemplate the notion, and how she renders the physical spaces where people rest their heads. This is a book with an immense amount of power in a slim package. Its sheer bravery earns it a spot on this list.

10. The Only Ones by Carola Dibbell

Carola Dibbell is proof that you should never listen to anyone who tells your genius has an expiration date at age 25. The self proclaimed "new author, old rock critic" has been writing for big-name publications for more than 30 years, but her debut novel just came out this year — and what an incredible book it is. The bizarre reproductive dystopia of The Only Ones is searing. Through the environment of her terrifying near-future and narrator Inez's unmistakable voice, Dibbell probes society with rare insight and maturity that's, simply, important. More than that, it's proof that the best things often come to (and from) those who wait.