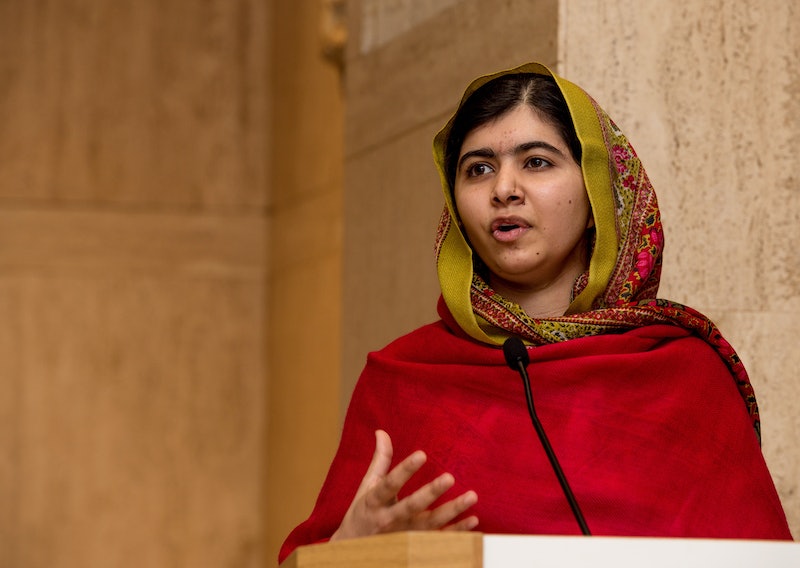 It was a year for women of all ages, from the gals we grew up with like Emma Watson to the legacy that is the notorious RBG. We wrote, campaigned, and fought our way to reach new boundaries for gender equality and female empowerment. And with the end of 2015 looming and New Year's resolutions almost upon us, it's time for a roundup of the very best that happened in the last 12 months that was done by or for women. Here are the 14 most dazzling feminist moments of the year.

What did the glorious instances of progress for women teach us this year? They highlight how the journey toward gender equality is far from over. Congress saw the most women ever in the Senate and House, but the increase has been painstakingly gradual. Activist and Nobel Peace Prize winner Malala Yousafzai's conversation with Emma Watson highlighted both ladies' goals for gender equality; ones that have yet to be reached. And women's suffrage in Saudi Arabia makes clear that female voting is still a topic for debate in some countries.

But let's take a moment to celebrate all that was achieved, discussed, and created during the year, as we gear up for yet another year of game-changing moments.

1. Hillary Clinton And Carly Fiorina Vie For The 2016 Presidential Election

In all of the United States' presidential elections, a woman has never snagged a major party nomination. Clinton came the closest in 2008, as runner-up for the Democratic nom, and 2015 gave her another shot to win the spot. And there was another female-led campaign across the aisle with Fiorina.

2. J-Law Published Her Essay On The Hollywood Gender Pay Gap

Jennifer Lawrence put the gender pay gap in the spotlight when she wrote an essay for Lena Dunham's feminist newsletter, Lenny, in October. Yes, it was pretty awesome when she brought down a movie producer (without naming names) who called another Hollywood actress a "spoiled brat," but the best moment was when Lawrence placed the responsibility on herself to not care what others think of her, whether on set or at the negotiating table.

Regardless of how you felt about the transition, Jenner's arrival as Caitlyn brought the issues that transgender women face right to our dinner table conversation. Increasing discussion of what matters to all women is never a bad thing.

4. Emma Watson And Malala Yousafzai Sat Down To Chat

After a November screening of the documentary He Named Me Malala, Watson got the opportunity to have a Q&A with the Nobel Peace Prize recipient. Let's just say that their conversation was everything and more. They not only talked about Yousafzai's fight for improving women's education, but also got into what it actually means to be feminist.

Going after the appearance-focused questions that women receive on red carpets everywhere was a serious highlight for ladies around the globe this year. The Representation Project started the campaign to deepen reporters' discussions with actresses about their work prior to the 2014 Academy Awards ceremony, but it hit full bloom in 2015. Here's hoping it will stick around for awards shows to come.

6. Michelle Obama Created A Feminist Playlist To Celebrate International Day Of The Girl

When FLOTUS curates a Spotify playlist, we listen. When that playlist celebrates girls and everything awesome that comes with them, we listen as we attempt to relax the facial muscles that have formed into a perpetual smile. There was Beyoncé, so trying to get rid of the smile was obviously pointless.

The Supreme Court's major ruling in June that the Constitution guarantees the marriage rights to same-sex couples laid down approval for women's relationships across the country.

Is Everyone Hanging Out Without Me? (And Other Concerns) made us laugh and cry, and (more than anything) taught us what it takes to make it as a female in the entertainment industry. So who wouldn't love a second opportunity to read some Kaling wisdom? Why Not Me? didn't disappoint.

Rousey may not be the holder of the women's bantamweight championship belt after her November loss to Holly Holm, but she's still a ridiculously good fighter who supports strength in all women. And now that we've seen her lose, we can look forward to her eventual comeback.

10. Women Will Vote In Saudi Arabia

2015 marks the first year that women in Saudi Arabia are able to vote or run for office in the December municipal elections. How did women in the country respond? More than 900 Saudi females decided to campaign for public office.

When Instagram took down one of artist Rupi Kaur's photographs showing the reality of menstruation, Kaur responded by uploading the photo again and thanked the social media app for doing exactly what her artwork was meant to critique: the shutting down of open dialogue about women's bodies.

12. There Were More Women Than Ever In Congress

With the Nov. 2014 elections came a year with 20 women in the U.S. Senate and 84 women in the House of Representatives. This year marked the first time in history that females held over 100 seats in Congress, though there's still progress to be made when looking at the 535 total seats.

These social media movements helped to alter assumptions about what females in science and engineering fields look like, and made us giggle in the process.

J-Law's essay may have been the shining star of Dunham's Lenny Letter in 2015, but the Girls star's newsletter is a fabulous feminist moment in itself.