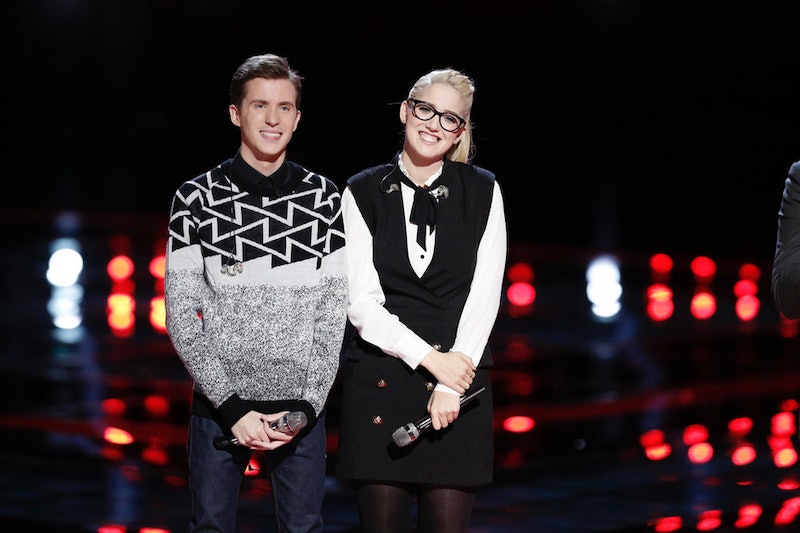 In a sweet twist of fate — well, for her at least — Korin Bukowski was saved by The Voice fan vote for the second week in a row. Bukowski landed in the bottom two with Team Pharrell's Evan McKeel and was forced to sing for her life in the competition. Though I personally wasn't a huge fan, the Team Gwen singer charmed America — and Adam Levine — with a mellow rendition of Marroon 5's "She Will Be Loved." Whether she deserves it or not, Bukowski is on her way to the Top 10 as the biggest underdog in the competition so far.

Bukowski has been quite the newsmaker on this season of The Voice. She made a splash in the Blind Auditions with her so-weird-it's-cool personality and unique vocals. Then she continued to make waves in subsequent weeks by slowly revealing a makeover that has her looking EXACTLY like Coach Gwen — seriously, it's a bit creepy. And now, Bukowski has begun the first contestant from season 9 to survive the Instant Save two weeks. So should all of these highly talked about moments earn her a spot in the show week after week? It's debatable.

On one hand, Bukowski is pretty talented in her genre of music. But on the other, she sticks to what she knows, proving she's not very versatile as an artist. While Bukowski's talent was interesting and different in the Blinds, her failure to show the audience new parts of her voice and personality have caused her to lose her luster over the past few weeks. Plus, her transformation into a mini-Gwen Stefani is rubbing fans the wrong way. Instead of turning herself into her coach, she should be finding new ways to show who she is as an artist. The audience is losing interest in Bukowski, which is why she's been in the bottom two since America has had a say in the results.

If Bukowski wants to keep herself in this game past next week, she needs to find a way to stand out. Whether it's by singing something completely out of her comfort zone or by dropping the Gwen Stefani act, changing up her current strategy is her only hope of making it past the Top 10. If she's not able to do that, there's no doubt we'll see Bukowski in the bottom two again next week — and that time will most likely be her last.