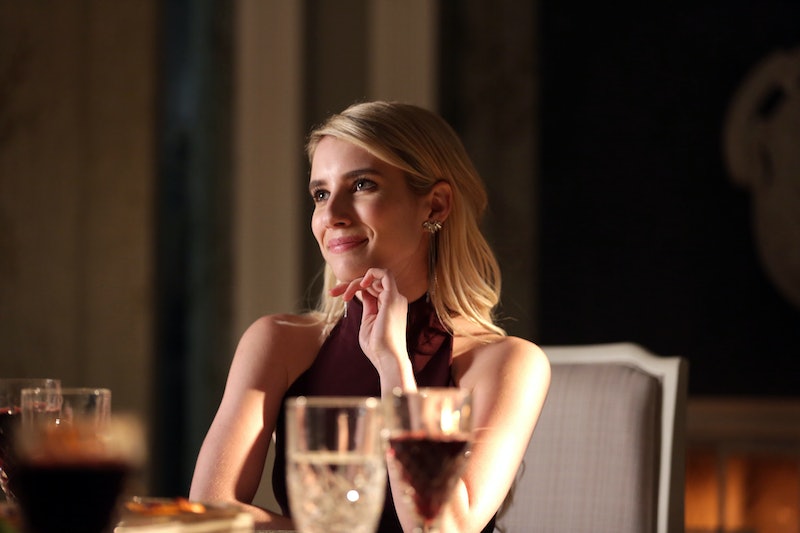 It’s decorative gourd season in the Kappa House, and with the accompanying pumpkin spice, roast turkey, and stuffing, comes a side of shock. Everyone is tucked into their respective Thanskgivings on Scream Queens. #5, #6, Grace, Wes, and Zayday start setting the table for their meal at the Kappa House, while Chanel is off in the Hamptons with the Radwell family. Everything seems to be going swimmingly for both parties, until, of course, truth bombs start flying faster than you can say “green bean casserole,' the biggest of which has to be that Hester is alive on Scream Queens.

The fact that Chanel wasn’t so successful in her murderous vengeance was actually the first truth bomb dropped in "Thanksgiving." Last week, we saw that jealousy got the best of our resident mean girl, and she responded in a way that “wasn’t the most adult way to handle conflict resolution,” as Chad said, referring to Chanel pushing Hester, aka Chanel #6, down the Kappa staircase. However, Hester reveals that she is not to be trifled with, and shows up, in full bedazzled neck brace glory, to the Hamptons at the Radwells' ritzy table.

You'd think the appearance of this new archenemy would be enough to send Chanel running for the staircase again, but not so fast. Chanel, so used to being the top dog in any kennel, is subject to humiliation at the super-uppity Radwell Thanksgiving, called common and "trash" for wearing the most fabulous feather dress this side of Björk. When Hester arrives, Mr. Radwell tries to make Chanel leave and spare the family awkwardness. They underestimate her materialism, however, because Chanel and Hester stay to participate in the "most mean-spirited game of Pictionary ever."

Chanel and Hester are assigned to a team, facing off against Chad, Thad, Brad, and Mr. and Mrs. Radwell in the brutal game. The clue ends up being a direct slight against Hester, and the family gleefully partakes in ripping her apart with brutal insults and personal jabs.

But shockingly, instead of joining in on the hating, Chanel reacts with aplomb, taking the side of poor Hester. "Let's go home," she says to her bravely, as the two storm out of the Hamptons house, ne'er to return. 'Tis the season for Scream Queens surprises, huh?