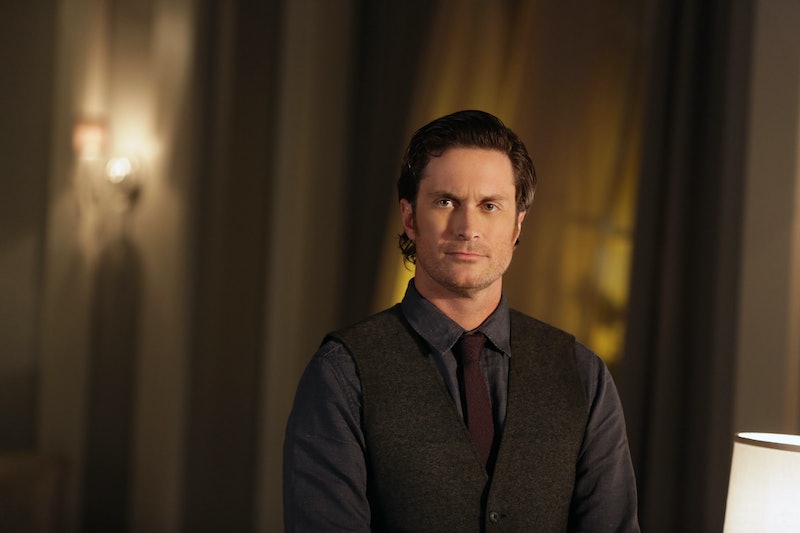 Poor, unlucky Wes. Or poor creepy, weird Wes. I still haven't figured this guy out. This week's episode finally revealed that Grace's dear old dad, Wes, is the father of the Scream Queens bathtub babies. That's right, in "Thanksgiving," Mr. Gardner is discovered to have been the unwitting sperm contributor to the deceased Sophia Doyle, the Kappa who perished shortly after giving birth during a Kappa party.

During a particularly tense Thanksgiving discussion in the Kappa House, everyone and their dog is being accused of having something to do with the crazy mass-murders occurring on campus. First, Dean Munsch points the finger at Chanel #3 for being particularly sweaty during the time when the Red Devil was attacking, which Chanel #3 attributes to her intense case of bathroom shyness. Then, Dean Munsch is discovered to have been fabricating her bologna allergy that absolved her of her participation in the murder of her ex-husband; she is then accused of killing everyone else.Then, Wes thinks that Grace might even be the Red Devil. It got cray, and everyone who is accused has their own alibi for each accusation. However, the most telling revelation is who the father of those bathtub babies is.

Pete storms in with the requisite box of evidence for an investigative journalist. When he pops the top, he reveals that he has video evidence of Wes sneaking around the Kappa basement and spray painting the cameras to conceal his deeds. Wes's excuse? The Paleo diet. He claims that he needed to borrow the Kappas' extensive meat supply to keep himself thin and caveman-like. Pete's not done however — he brandishes a yearbook, in which there is proof positive of Wes philandering around Kappa around the time that Sophia Doyle would have been impregnated. He then pulls some very high-tech DNA testing out, and BAM! Wes is revealed to be Boone's father, therefore making Grace Boone's sister. Things just got juicy for Scream Queens fans, and very, very bad for Wes.