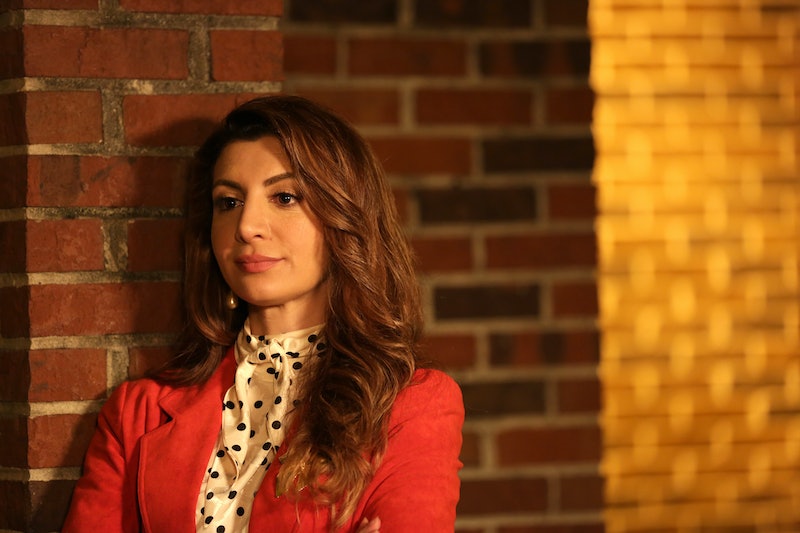 I never though I'd be so unaffected to see someone's head instead of a turkey on a platter. Though I did occasionally enjoy her slightly off-brand take on an evildoer, and tendency to pair an acid-wash skirt with a layered turtleneck, Gigi's death on Scream Queens was a long time coming. That's why, despite her brutal demise, I wasn't exactly upset at the end of this week's "Thanksgiving."

We have known for a while that Gigi isn't quite the benign den mother she makes herself out to be. Indeed, she revealed herself to be more backstabbing and manipulative than any of the millennial Kappas, having taken great pains to carry out a revenge plot "more than 20 years" in the making. Though it isn't quite clear what her motivation was (many fans theorize that she may have been the brunette Kappa who crying next to the bathtub after Sophia died, and that she is so traumatized by the event that she turned homicidal), we do know that Gigi was not the best egg. Through phone calls and more direct forms of contact, she outed herself as one of the Red Devils' most willing accomplices — and maybe even their leader.

The last time we lay eyes on the living version of Gigi, we see her preparing a delectable little meal for the Red Devil — who, by now, we surmise must be the daughter of Sophia and Wes Gardner, which also makes her the sister of Boone and Grace. Guesses on her identity are still out, but in any event, the Devil is seen contemplating Gigi's preparation of a questionably small turkey and sides, before brandishing a knife that we can only assume isn't really used to slice up that tiny birdie.

The end scene is almost a happy one. The remaining members of Kappa, plus Wes, Dean Munsch, Chad, and Pete, are sitting down to enjoy a nice turkey meal. Everyone's outfits are really on fleek and all of the drama of the night seems to be dissipating. Munsch asks Wes if they should set a place for his girlfriend, and Wes relents that he doesn't know of her whereabouts. Uh-oh. When that gleaming silver dish is placed on the table, we already know what's about to happen.

Gigi's head, tongue lollygagging out and eyes cast asunder, is revealed instead of the delicious turkey. It looks like the Kappas' Thanksgiving dinner is going to have to wait.

More like this
Watch 'Drag Race' Queens Get New Drag Names In This Exclusive 'iCarly' Video
By Jake Viswanath
Hayden Panettiere Will Return For 'Scream 6': "We F*cking Won, Scream Fam"
By Jack Irvin and Jake Viswanath
Jennifer Lopez Found The Perfect Ben Affleck Throwback Video For Mother’s Day
By Stephanie Topacio Long
Ryan Reynolds’ Mom Hilariously Tests His Patience In A Mother’s Day Video
By Brad Witter
Get Even More From Bustle — Sign Up For The Newsletter