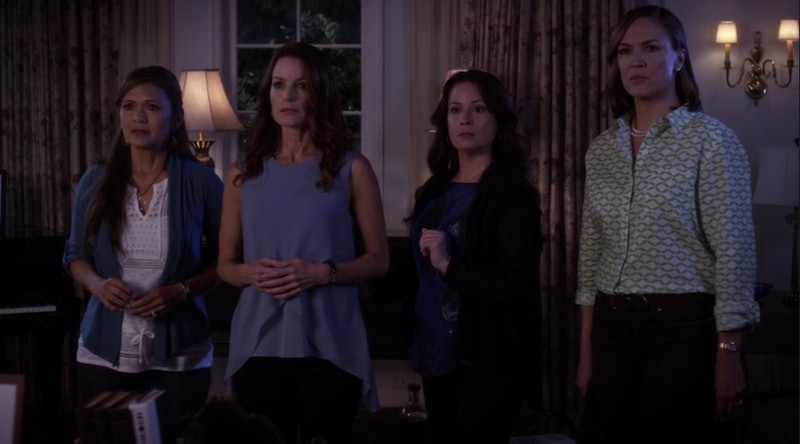 When Pretty Little Liars returns in January, the Liars won't be teens anymore — they'll be young women living on their own in cities far away from Rosewood. But just because Emily, Spencer, Hanna and Aria won't be living in their hometown doesn't mean that they have completely forgotten about where they grew up, or the families that the girls have left behind. The girls may be adults, but we haven't said goodbye to the moms and dads of Pretty Little Liars — in fact, the PLL parents will still be involved in the show in a major way. Though the parents will be majorly involved in the Liars lives, it won't be in quite the same way that they were when we saw the girls in high school. Get ready for a very different parent/child relationship when Pretty Little Liars returns.

Spencer And Her Mother Will Work Together

According to the "Five Years Forward" special, Spencer will be working as a lobbyist in Washington, D.C. before heading back to Rosewood. While in her hometown, she decides to help Mama Hastings run for state senate. As if this family couldn't get more ambitious...

Hanna Will Still Be Getting Advice From Her Mother

The new special revealed that Ashley and Hanna are still as tight as ever, but that their relationship will be a little different now that Hanna is an adult. According to Laura Leighton, the actress who portrays Ashley, Hanna's mom will have to be a little bit more choosy with the advice that she dishes out to her grownup daughter. Let's just hope that she continues to school her on appropriate funeral attire, considering that the special revealed that there will be yet another death in the Season 6B opener.

This news should shatter the hearts of Pretty Little Liars fans everywhere: Emily's dad died in battle sometime over the five-year time jump. Considering that Wayne was hands-down the best PLL dad, it's no surprise that Emily took his death extremely hard. As the special revealed, Emily dropped out of college when the grief became too much to deal with, and instead took a job at a bar. There's no word yet on what Emily's mother will be doing after the time jump, but I imagine she took the death of her beloved husband as hard as Emily.

The Moms Got Out Of The Basement

Remember how psycho Rhys locked the moms in the basement in the Season 6B finale? Don't worry: as the special revealed, all of the drunk PLL moms were eventually rescued. Though we don't have a definitive answer, the generally consensus seems to be that Kenneth DiLaurentis eventually went down the basement to do some laundry, which allowed the moms to escape after living on scotch for a bit. Hey, there are worse things... like being locked in a dollhouse for weeks.

Don't worry, PLL fans: the parents aren't going anywhere. Tune in to the new season of Pretty Little Liars on Jan. 12 to find out exactly what these parents are up to.