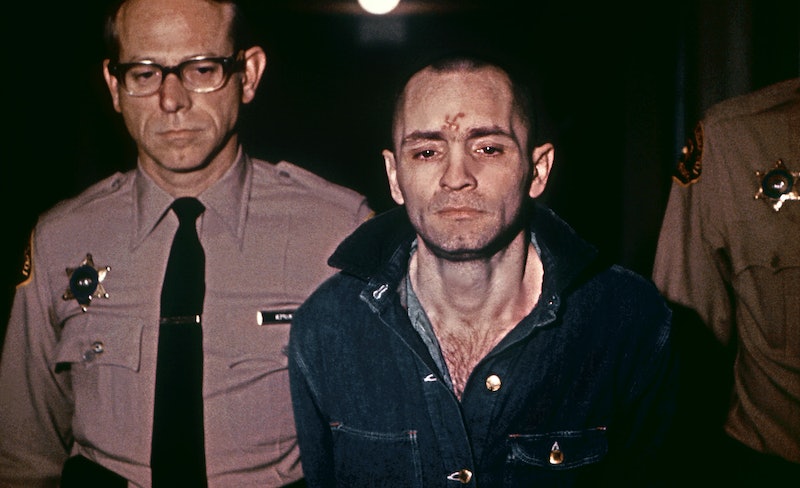 Some of the most notorious murderers in the world happen to have incredibly fascinating backstories. These five surprising facts about seven famous murderers shed light on the complexity of those who have the capacity to commit such horrible crimes while also, say, having an aesthetic eye for painting. The infamous Charles Manson was one such murderer whose need to create led him to not only visual arts, but also music. Manson met and befriended the Beach Boys, who turned his song "Cease to Exist" into the harmonious 20/20 tune "Never Learn Not To Love." The track is surprisingly upbeat, an ode to a sweetheart with the kind of rich sonic depth the Beach Boys were just learning to master.

Manson also holds the distinction of being a convicted serial killer who never carried out the deed himself. He was held responsible for the crimes that his followers committed due to his powerful influence over them. Manson's idea of an apocalyptic world under what he deemed "Helter Skelter" later led his followers to instruct Rolling Stone to let the Beatles know what had transpired, asking that the band give Manson a call. Manson's reported brainwashing of his followers extended while he was in jail and has since morphed into a misguided environmental mission dubbed the Order of the Rainbow.

But that's just one disturbing detail. Here are some more.

Milwaukee serial killer Jeffrey Dahmer appeared to exhibit strange behavior early in his life that would carry on into adulthood. The alcoholism that forced his discharge from the army (Dahmer served at the behest of his father after dropping out of college) was present even in his youth. He reportedly came to most of his high school classes drunk and staged pranks that included faking seizures and even photobombing an Honor Society picture. Dahmer underwent a hernia surgery when he was 6 years old, and it was that procedure that reportedly marked the biggest shift in his behavior. Perhaps the most surprising fact about Dahmer was that he worked at a chocolate factory shortly after returning to the states following his discharge from the army, only temporarily leading a relatively normal life.

John Wayne Gacy was known as the killer clown and his artwork certainly reflects as such. A prolific painter while in prison, Gacy's artwork reflects his former life as a clown known as Pogo who frequently entertained at children's birthday parties in Chicago. Surprisingly dedicated to his community, Gacy served as a Street Lighting District chairman as well as a local Democratic Committee member. Gacy even met First Lady Rosalynn Carter while in the latter position. He was even a successful businessman, having studied business in college. Prior to being arrested, tried, and convicted, Gacy was a building contractor.

Dan White was a former San Francisco supervisor who gunned down then-Mayor George Moscone after Moscone refused to give him his job back following his resignation. He then killed fellow Supervisor Harvey Milk. White was a Vietnam war veteran and had served as a police officer and firefighter, though his position with the Board of Supervisors prevented him from continuing on with the SFFD while serving. It was the police union as well as other conservative citizens who would advocate for White's appointment. White was a staunch conservative and incredibly homophobic. White's trial was followed closely by gay rights activists and the entire Bay Area. Following his arrest, White became known for his "twinkie defense" in which a psychologist blamed White's unhealthy diet as being a contributing factor to his crime.

Aileen Wuornos was a sex worker whose first murder was reportedly committed in self-defense. The five others that followed that Wuornos confessed to were reportedly different. Her first victim, Richard Mallory, allegedly had a history of sexual abuse and had been imprisoned for a decade for a sexual assault conviction. Wuornos was only the second female inmate on death row to be executed in the state of Florida. Her execution was expedited in part due to Jeb Bush, the governor of Florida at the time. Bush signed a stay of execution after three psychiatrists found Wuornos to be competent enough to understand a death sentence. Perhaps even more curiously, Wuornos was a huge fan of Natalie Merchant and one of her last requests was that the song "Carnival" be played at her funeral.

Known first as the "Valley Intruder" and then the "Night Stalker," Richard Ramirez's crimes spanned two major metropolitans in California — Los Angeles and San Francisco. Ramirez was a devout Satanist and was reportedly influenced by his cousin, Mike, who also worshipped Satan. Richard was allegedly witness to Mike killing his wife and had seen polaroids of graphic actions Mike had taken while deployed to Vietnam in the 1960s. In total, Richard was convicted of killing 13 people in a lengthy trial that saw 43 charges lobbed against him. His last words to the courtroom following his conviction were "No big deal. Death always comes with the territory. I'll see you in Disneyland." As with Wuornos, Ramirez was a big fan of music and reportedly loved AC/DC, even leaving a hat with the band's logo at the scene of one of his many crimes. He died of natural causes at the age of 53 and leaves behind a wife whom he married while on death row.

Serial killer Ted Bundy was notorious for his callous, almost emotionless descriptions of the mentality behind his actions. It's Bundy who uttered the creepy, iconic statement "we serial killers are your sons, we are your husbands, we are everywhere. And there will be more of your children dead tomorrow," Shockingly, Bundy was briefly known for good deeds and had reportedly rescued a child from drowning and volunteered as a crisis center hotline worker while in college. His position and interactions with fellow volunteer Ann Rule is what ultimately prompted the writer to pen The Stranger Beside Me. Rule had unprecedented access to Bundy and noted that "Ted Bundy took lives, he also saved lives." Bundy attempted to save himself multiple times. He escaped jail twice and postponed his date of execution twice before facing the electric chair in Florida in 1989.