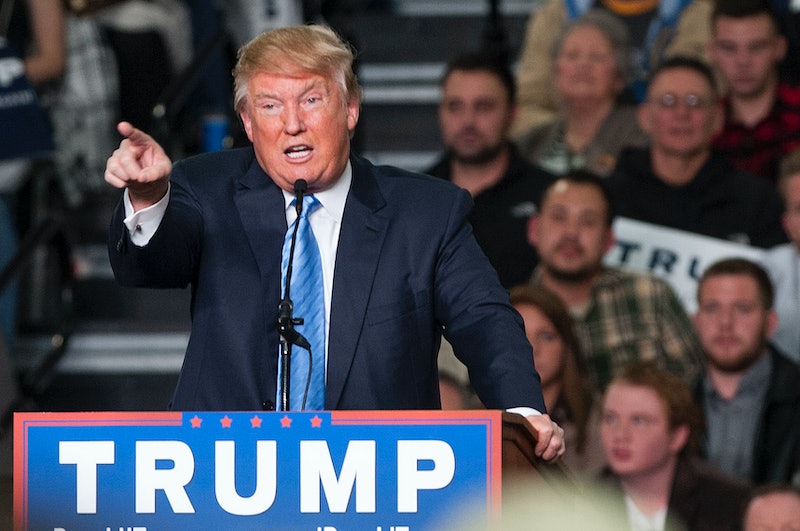 On Tuesday, Republican frontrunner Donald Trump did something that's drawn him pointed condemnation from various directions, including an angry denouncement from The New York Times— during a rally in the crucial primary state of South Carolina, Donald Trump mocked journalist Serge Kovaleski's disability in the middle of his speech, in front of thousands of supporters.

That's sure what it looked like, at the very least. Kovaleski, an investigative journalist now with The New York Times, was the author of a 2001 Washington Post article which mentioned authorities in New Jersey investigating "a number of people who were allegedly seen celebrating the attacks and holding tailgate-style parties on rooftops" in New Jersey during the 9/11 attacks.

As the Post now notes, however, the 9/11 celebration allegations were never corroborated, and in fact, they've since been debunked. But they're back in full force thanks to Trump's full-throated embrace, which prompted Kovaleski to tell CNN that he didn't remember "anyone saying there were thousands, or even hundreds, of people celebrating." That's the statement Trump was referencing when he performed what many people viewed as a crude, demeaning impression of Kovaleski.

As NBC News details, Trump has since denied that he was doing any such thing, saying in statements that he was acting like "what I thought would be a flustered reporter trying to get out of a statement he made long ago," and that he didn't know what Kovaleski looked like.

Kovaleski, for his part, isn't buying it.He told the Washington Post on Wednesday that he was sure Trump knew of his condition — arthrogryposis, a congenital ailment which can limit joint movement, or lock them into certain positions — and that he wasn't all that surprised by the GOP frontrunner's behavior.

The sad part about it is, it didn’t in the slightest bit jar or surprise me that Donald Trump would do something this low-rent, given his track record.

You can judge for yourself whether you think Trump was trying to mock Kovaleski's condition, but this much is clear: that's exactly how he and his employer saw it. On Wednesday, a spokesperson for The New York Times responded to Trump's gesturing.

We think it's outrageous that he would ridicule the appearance of one of our reporters.

Trump's response to the controversy so far has been a pretty classic example of his overly aggressive, swing-from-the-heels style — he didn't stop at just denying he was doing a mocking imitation of Kovaleski, but went on to attack the journalist further. In a Twitter statement on Thursday, Trump accusing Kovaleski of using his condition to "grandstand."

Serge Kovaleski must think a lot of himself if he thinks I remember him from decades ago – if I ever met him at all, which I doubt I did. He should stop using his disability to grandstand and get back to reporting for a paper that is rapidly going down the tubes.

He also gave the following statement to the Washington Post, which is nothing if not dripping with condescension and disrespect. And, of course, braggadocio — one of the all-time great memories?

I have no idea who this reporter, Serge Kovalski [sic] is, what he looks like or his level of intelligence. I don’t know if he is J.J. Watt or Muhammad Ali in his prime — or somebody of less athletic or physical ability. Despite having one of the all-time great memories I certainly do not remember him.

If conventional political wisdom were any guide, a presidential contender taking time out of their Thanksgiving Day to rail against a well-regarded reporter they've already grossly offended would probably be cause for concern. But in Trump's case, conventional wisdom always seems to fly out the window — if painting Mexican immigrants as violent criminals, tweeting fake, racist statistics about murder rates, attacking John McCain's war record, comparing Ben Carson to a child molester, and being verbally abusive towards multiple women wasn't enough to turn off his supporters, it's hard to see why this would.