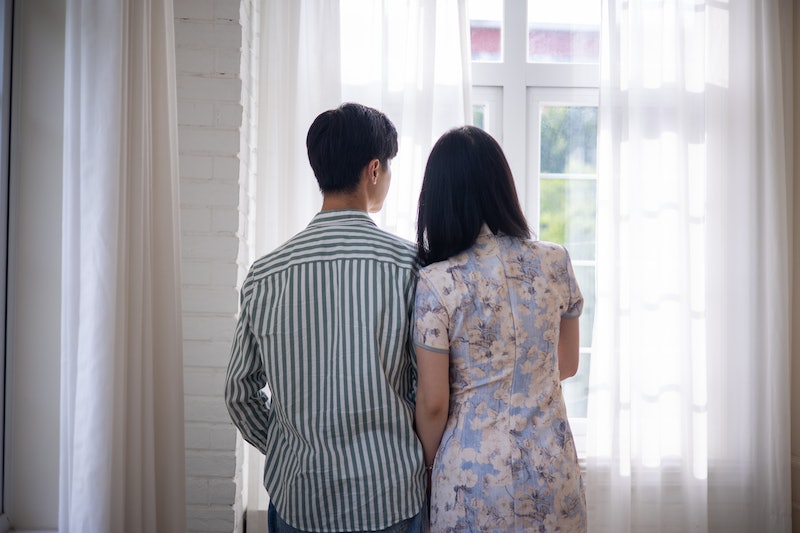 Of course you know you should never settle for less than you deserve. Yet after any prolonged period of dating dry spells or just straight up relationship failures, you may have thought to yourself that you're just doomed to a life of being forever alone.

First of all: You're not. Second of all, there's nothing wrong with being single and being picky in dating isn't such a bad thing. Because yeah,"we accept the love we think we deserve" — shout out to some Perks of Being a Wallflower wisdom. Your heart is too special to be wasted on someone "who's nice, but..."

It's almost easier when the person is a total asshole and serves you all the reasons to end things on a silver platter. But what happens when they're not doing anything wrong? Yet things just don't feel... right. You could tell yourself to give it more time. Because you're being mean and shallow and why can't you see what a great thing you have? Oh, have I been there.

As pointed out in Psychology Today, we adapt the fallacy that our worth is tied up in our ability to find a mate. We think we aren't complete until we find our other half. And let's not forget that pesky biological clock (which is totally a thing for men too, by the way). So it's not really surprising we may have a rushed tendency to settle before finding the right match. Are you? Here are nine signs you may be settling.

If it seems like you have to convince yourself and others that you're happy, or you even have to look for reasons you're with this person, I'd say that's one of the first red flags you're in a sinking ship of settling. You shouldn't have to explain to others, or yourself, why you're dating someone. We're not writing a list of pros and cons here at a middle school slumber party. As pointed out on eHarmony, making excuses for a partner or anything questionably negative in the relationship is a definite sign you're in something you probably shouldn't be in. And things like "yeah, but he's so great with kids" or "she has such and such degree" or "they're amazing and I'd be crazy not to be with them" shouldn't be the sole basis of being in that relationship.

2. The Little Things Bother You... Too Much

It's OK to get a little irked by people's quirks and bad habits, especially when you've gotten to know someone well and you've become comfortable with each other and those walls have come down. That's great. But when it gets to a point of resentment, over some of the smallest things, that's another glaring sign you probably shouldn't be with this person. Relationship expert Andrew G. Marshall told the Daily Mail that most of us assume the big issues are what drive a couple apart, when sometimes it really is those minor irritations that add up. Because if the fact that they don't squeeze the toothpaste tube correctly after using it is something that ruins your day and makes your skin crawl, you may be projecting a bigger issue at hand.

You always seem to size up your relationship against other couples, and usually, it's not a very healthy comparison. Maybe you just can't help but notice how much happier others seem together, you're envious of all the cool things they're doing together, or they're just so compatible. If you were with someone you truly wanted to be with and cared about, these things wouldn't matter. Or at least, you wouldn't be noticing them on such a grand scale. It would be more of an observation rather than a comparison. According to Psychology Today, frequently comparing your partner unfavorably to other people, especially friends' partners or spouses, is a sure sign of an unhealthy relationship.

No relationship is perfect, and of course it's normal to steal a glance at Beyonce and Jay Z and question what you're even doing with your life. But tune in to when these sideways glances are actually just a search for a way out.

As pointed out on Her Campus, if you find that you’re trying to convince yourself that you don't have it that bad, then you probably don't have it that great, either. Relationships are tricky, there’s no denying that. But why would you need to think of situations in which you’d be worse off if you were already happy?

5. You Keep Thinking Your Partner Will Change

If you're viewing any stage of your relationship as a temporary thing that "should get better eventually," there's another indicator that you've settled yourself into some unhappiness. Because overall, you should like your partner just the way they are right now. Fast forwarding to some future, "better" version of who you want them to be doesn't exactly sound like a genuine, or healthy thing for that matter. According to YourTango expert Renee Jain, the problem with dating someone because of their potential is that you're not getting to know who they really are. Jain and fellow YourTango experts stressed the fact that while it's normal for people in a relationship to grow, they have to do it on their own.

Thanks to our society's shitty stigma of being single, we may sometimes resort to just about anything for the sake of not being alone. As pointed out in The Huffington Post, very few people know how to be alone and do it well.

And alone just has such a harsh sound to it, doesn't it? It's important to learn how to embrace being alone without being lonely. Know your value and your worth, and don't let someone else have to define that for you. In her article, author Sara Eckel pointed out that we don’t know how to discuss single women in our culture; throughout history they were seen as lonely spinsters that had to have something wrong with them. Just remember — being with the wrong person for the wrong reasons is so much worse than just riding out the single wave.

7. You Don't Think You Can Do Better

So maybe you feel trapped in this situation that seems decent, but you're pretty much only in it because you're afraid to leave. And you're afraid to leave because you're afraid you won't find anything "better" and you might as well start looking for a place with an extra room for your cats right meow. But, as suggested by Mark D. White Ph.D in Psychology Today, we shouldn't evaluate partners on whether they're good enough, but on whether they're right for us. Tallying up a partner's good and bad traits in the first place also sounds like another way you're trying to convince yourself to stay in the relationship. If you're really into it, you wouldn't have to think about doing that.

8. You Feel Tied To Your Commitments

You've already invested the time and energy, you've made plans and memories together, and you've taken the time to get really comfortable with each other, so why break it off? The thing is, if you’ve already given it a chance, tried working through whatever issues there are, and you still don’t feel quite right about it, this may be a sign that you’re lying to yourself in the relationship.

In an article for Psych Central, Darlene Lancer, JD, MFT, wrote that though no one needs consent to leave a relationship, millions of people remain in unhappy relationships that range from empty to abusive for many reasons. The feeling of suffocation or of having no choices stems from unconscious fears that lead to guilt. Lancer pointed out that people give many explanations for staying in bad relationships, ranging from caring for young children to caring for a sick mate.

Remember that you don’t owe anyone anything other than honesty — for both your partner and yourself.

9. Your Relationship Is Dependent On Others' Opinions

Maybe you don't want to break up because you're worried about what your family is going to think about you being single again. Or maybe your friends pushed you two into dating and you think they'll judge you. But so what? Is that really a reason to stay? You're the one dating this person, not them. And if you aren't happy, to hell with what everyone else thinks.

It's difficult having to acknowledge that something in your life isn't really working out. And especially when other people's feelings are involved, things get messy. But no one deserves to settle, or be settled on — so don't be afraid to walk away when you know it isn't right.