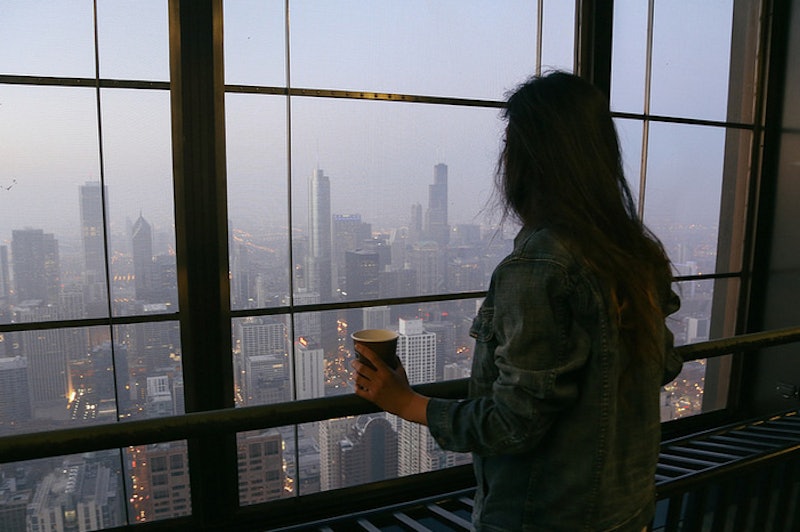 There are two ways people talk about "settling": When you accept less than you deserve, and when you learn to extend comfortable roots down into the life that you have. I'm here to talk about both. In a world that encourages and buoys between extremes—"Be whatever you want! Achieve anything! But be grateful for what you already have and don't want for anything!"—it can be hard to know what to want, or how much you're supposed to want, if you're supposed to want anything at all. And everyone has an opinion on how we should feel about things like settling and settling down.

At the end of the day, we're making choices for our lives all day every day, even when we don't realize it. But when it comes to the big things: partners, jobs, cities, etc., we have to know what it means to "settle" and not. These are the things I wish someone would have taught me, so here, the 7 things I hope to one day teach my daughter(s) about what that means:

Settling is not always a bad thing. Do not let people scare you with that word.

You should settle into your life. You should learn to be grounded and peaceful every day. You should strive to strike the balance of being grateful for what you have while imagining what kind of "more" you'd want.

The first step in not accepting less than you deserve (which is what people usually mean when they use the word "settle") is learning to listen to that little, tiny gut feeling you get when, despite not knowing what it is, you know there is something better for you, whether that's in terms of a different relationship, another job. This is a feeling I can't quite describe, but when you have it, you'll know it. I hope I can teach my daughter how to know.

It may take five (or twenty-five) jobs before you land on the oh-my-god-perfect right one. People go decades before they find their groove, mostly because they don't take it upon themselves to keep trying. It may take ten relationships or twenty years before you're even able to identify who Mr. or Ms. Right would be. Trust that the process is the unfolding, that there's no time limit or trial period you have to fit your life into before you expire into a settled "forever."

There is a difference between "committing to the right person while you're young" and "settling for someone while you're young out of obligation or fear or both." There are a lot of dumb myths surrounding young love, and they mostly are attached to our concept of need and necessity and settling (the accepting less than you deserve kind) that was predominant in society a mere few generations ago. I'm here to say it's dumb and awful. Some people are not meant for monogamy; some are. Some people aren't ready to commit to something or someone until they're 40, and some are ready at 23. You don't automatically get to a new level of maturity with every birthday that rolls around—it's a matter of how much life you pack into those years. That, and if you commit to the truly right person, even if you're young, your relationship with them will facilitate your wildest and most beautiful not-relationship-related dreams, not the other way around.

You're always going to be a little bit unsure, and that's fine

Before you choose to do anything, you'll probably be about 90% ready and 10% so absolutely terrified you can't breathe. It's mostly the best any of us can hope for.

...BUT if you feel more hesitant than excited about something, it might be not be right

If you're in a state of such anxiety-inducing, fear-riddled indecision you've already made your choice, and it is: I don't actually want this thing, but I am so afraid of the social implications/being alone/failing someone else/letting go of an idea/etc. that I can't let it go.

Happiness, and settling into the ideal life for yourself, is not (as many people would have you believe) about being anything you want. In fact, that's kind of counter-productive advice. You won't wake up one day with the inherent interest or strong stomach to be a neurosurgeon if you're not meant to be one, and by thinking you're able to do anything, you'll probably feel like a failure if something ultimately doesn't work out because you randomly tried to do something that isn't the natural, best path for you. Living your best life is about being who you are. Doing what feels true. Listening to yourself. Settling down when you feel grounded, and moving when you want the wind to take you. It's a messy life. The point is not a perfect picture—it's to reap what every and any experience can offer you. The only way to fail is to abstain from trying.

Until they say something more specific like, "I think you should be with someone kinder," or, "There are probably more compatible partners out there for you," don't listen to them when they say "you can do better." That kind of sentiment turns people into trophies to be earned, rather than embracing them as the wonderfully complicated humans they are, who need to be valued, loved, and experienced on a personal basis. That makes them consumable, judge-worthy pieces of meat, accessories for your life. Let go of the idea that you can "do better" than anyone. It's not about getting the best looking, most endowed and least indebted human alive to be with you. And only you are able to experience what reality is like with any other person.

You choose what you deserve

And you teach people how to treat you. Sure, as human beings, we all inherently deserve love and respect and kindness, but we don't all get it (and we sure as hell don't all give it). That means you have to take it for yourself. You have to draw your own lines and write your own rules. You have to decide what matches what you're willing to give and go after it. Everybody "deserves" the best. The only people who get it are the people who decide they also deserve to chase it themselves.