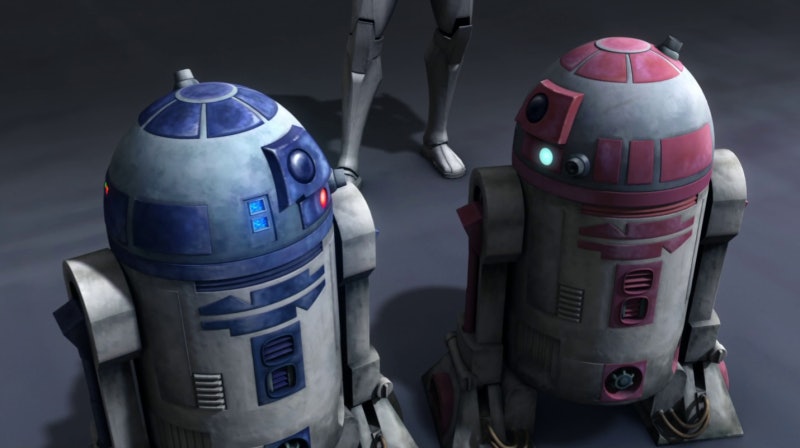 When I first heard that a pink R2-D2 unit will be appearing in Star Wars: The Force Awakens , I thought it was simply a marketing ploy. I figured that some Disney exec wanted to capture the "girl" market with a gendered droid and some pink spray paint, but the reality is, surprisingly, totally different. The story of R2-KT, the pink R2-D2 unit, is one filled with hope, the power of community, and an unwavering love of Star Wars.

According to io9, in 2004, Katie Johnson, a young South Carolina girl, was diagnosed with an inoperable brain tumor and her family was told she had only months to live. Katie loved Star Wars as much as she loved the color pink and when her health declined and she was no longer able to leave her bed, she wished for an astromech droid to watch over her like R2-D2 did for a sleeping Padme in Attack of the Clones. It was her sister Allie who suggested the droid should be pink. For any other child, this would have seemed like an unrealistic request, but Katie and her family were no ordinary Star Wars fans.

Katie's father, Albin Johnson, is founder and Legion Commanding Officer of the 501st Legion, the world's largest Star Wars fan costuming organization. Currently the organization has over 8,000 members and 11,000 registered costumes. The 501st is renowned for their charitable work, participating in fundraisers and visits to local children's hospitals. And Johnson, who had dedicated so much of his own time to others, was now in need. Word spread fast through the Star Wars community about the family's plight, and fans around the world were quick to respond. Thousands of letters poured in and the 501st Japanese Garrison even got George Lucus to film a "get well" message for Katie. Then Jerry Greene, a master droid builder with the R2 Builder's Club began a campaign to collect the parts to make Katie's dream of a pink R2-D2 a reality, whom they fittingly named R2-KT.

When Katie's health further deteriorated and it became clear that the Builder's Club's unit would not be ready in time, Andy Schwartz, another astromech builder, painted his own personal R2-D2 unit and delivered it to the Johnson family.Katie Johnson passed away on Aug. 9, 2005, and R2-KT was by her bedside through her final days.

In 2006, the R2 builders finished their R2-KT unit and presented it to the Johnson family. Since then, the Johnson family has made R2-KT a ambassador of goodwill for the Star Wars community. R2-K2 participates in juvenile hospital visits, fan conventions, and parades. In 2007, a limited edition R2-KT action figure was released by Hasbro and raised $100,000 for the Make-A Wish Foundation. And in 2008, R2-KT (changed to QT-KT) entered the Star Wars official cannon by appearing in the animated feature film The Clone Wars. Qutee was owned by Jedi Knight Aayla Secura and was noted for its "gossipy" conversations with R2-DT about the war efforts. The R2-KT has since appeared in the Star Wars Weekend parades at Walt Disney World and was guest of honor at Celebration Europe in Germany.

Currently, "the Imperial droid with a heart of gold" is known only among hardcore fans of the Star Wars universe, but this seemed primed to change. The little pink droid will reportedly be making its big-screen debut in Star Wars: The Force Awakens. Katie's father, Albin Johnson told Geek Speak how it happened:

“Mary Franklin of Lucasfilm asked me to pitch the idea to Kathleen Kennedy (Lucasfilm President), and after hearing the story of our pink ambassador of hope Lucasfilm requested we ship her off to London early last year. Quick repairs were made and off she went for six months,” Johnson says in his email. While he could not disclose just when we could expect to see the pink droid, he was assured that she will definitely appear."

So, when you see a pink droid in Star Wars: The Force Awakens, remember the story of R2-KT and all the people who came together to make a little Star Wars fan smile in her final days. Albin Johnson wrote on his website, "If you ever needed a reason to be proud to be a Star Wars fan, just be on the lookout for a little pink droid. She’ll remind you that there’s power in hope." Below is a video explaining the story of Katie Johnson and R2-KT:

And that is why I love being a Star Wars fan.