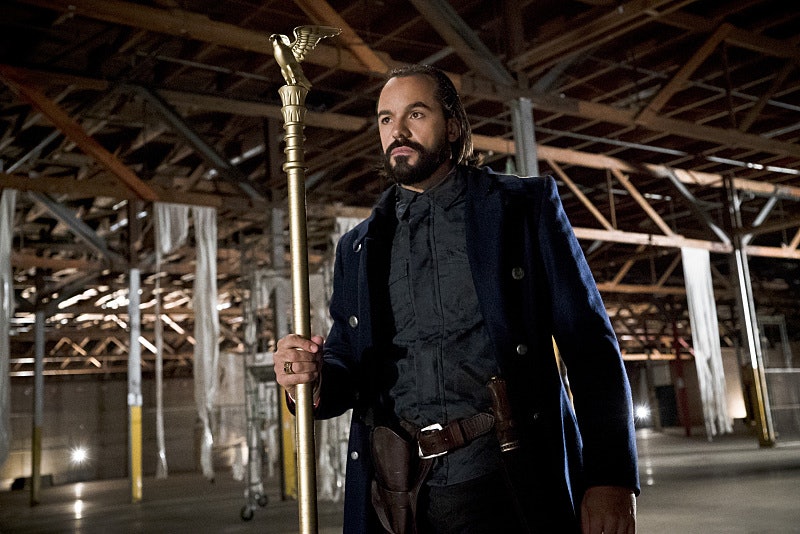 This year for the huge The Flash and Arrow crossover, the idea seems to be go big or go home. For example, why have a big bad jump between two different series, when they could jump between three? That's the idea with Vandal Savage, the Legends of Tomorrow villain who will make his CW debut in this week's big crossover event. Then he'll become a regular fixture on the network when the third spinoff in this DC universe premieres. So before he becomes the latest supervillain you love to hate, you might want to get to know the actor who plays Vandal Savage, Casper Crump.

Crump will make his first appearance in The Flash episode "Legends of Today" on Tuesday night, followed by Arrow's "Legends of Yesterday," before finally joining Legends of... see where this is going? This might be the first time you see Crump, so it's a good thing you'll have plenty of opportunities to get to know him.

Crump hails from Copenhagen and has appeared in a handful of television shows in Denmark, so unless you're a regular viewer of Danish television, you probably haven't come across him. An exception to that would be huge fans of The Killing, as Crump appeared in the Danish series it's based on. Here's what else Crump starred in before coming to the U.S. as Vandal Savage.

Crump starred as Anders in this Danish comedy, and even though I have no idea what's going on, the opning above makes me want to watch all of Tvillingerne & Julemanden.

Aka, Sover Dolly på ryggen?, a Danish-language film that sounds a lot like The Back-Up Plan.

You may recognize this one, even though it's also entirely in Danish, because it has an Academy Award. Helium won the 2013 Oscar for Best Short Film, Live Action. It's a story about a boy dying of cancer who finds comfort in the fantastical stories told by a hospital janitor, played by Crump.

If Crump wins you over on The Flash and Arrow this week, here's something else to look forward to: he'll play Captain Kerchover in the live-action Tarzan set to be released next year. Of course, if Legends of Tomorrow is anything like the two series that came before it, Vandal Savage will be a huge breakout role for Crump.