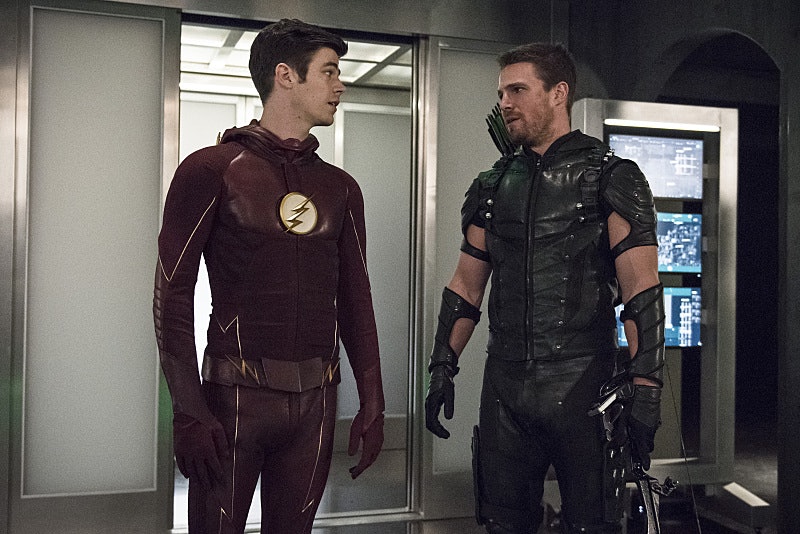 The Flash certainly loves its time travel, so let's hope into our time machine and travel back a few seasons on Arrow. Yes, Arrow. Remember back when we learned that Oliver got one of his flings pregnant, and Moira Queen quietly paid her off to disappear? The idea was for this girl — who still doesn't even have a name — to pretend to have a miscarriage, leaving Oliver to assume he's childless. Well, Oliver ran into this girl again on The Flash , and she had a little kid with him. Could this child be Oliver's son?

The big Flash and Arrow crossover event brought the two superhero teams together once again. First, it was Star City. Then the action moved to Central City, where we last spotted Oliver's former fling — the same location Moira told this girl to move for one million dollars.

Last season on The Flash, he happened to bump into this girl in Jitters, and it was an awkward moment for everyone. Now, it's this kid who bumps into Oliver and he at first doesn't think anything of it. The kid has a little Flash toy, and Oliver has already been giving Barry a hard time about how much Central City idolizes him.

It's only when the kid runs off to his mother that the pieces start falling into place. Oliver recognizes this girl. It's the same girl we saw Moira pay off, the same girl he bumped into last season, and now she's here with a child. The kid looked maybe six or seven. That would line up perfectly with Oliver's timeline, pre-Island. He landed there in 2008, came back five years later, and now we're even three years after that. For the child to be seven, that means he was born sometime in 2007... and it all lines up. The little boy even looks like him with sandy blonde hair.

There's a clear moment of fear on Oliver's face when he sees this child and his mother. He hasn't made contact with them yet, but he's staying in Central City for a few days longer to help Barry deal with Vandal Savage. Could he run into this girl again? Is this boy actually his son? Good thing this two-episode crossover isn't over yet.