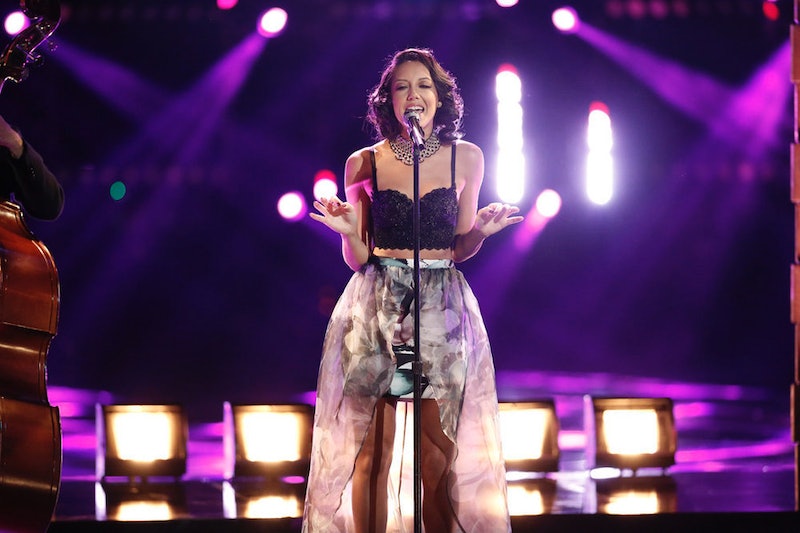 With every passing week, The Voice Season 9 is getting more and more intense. Every contestant is just so talented this cycle, and it's so hard to see folks going home with each elimination. In recent weeks, singer Amy Vachal has shown off her ability to jazz up modern hits like Drake's "Hotline Bling" and Taylor Swift's "Blank Space" — but there's so many other facts you need to know about The Voice 's Amy Vachal. The Brooklyn crooner on Adam Levine's team has certainly charmed her way into the Top 10 with songs like "Dream A Little Dream" and "A Sunday Kind Of Love," and there's likely much more where those came from.

Since her Blind Audition, Levine has had high praise for the talented singer, who was originally on Pharrell Williams' team until Levine snatched her from elimination in a Battle Round steal. "The way you have won this season, I think better than anybody else, is taking your own approach to songs," said the Maroon 5 singer after Vachal's rendition of "Blank Space." "You have completely triumphed and created this album of different kinds of versions of these songs and to me, that is the artistry that I love and that I'm looking for. I'm as pleased as I could possibly be. I'm so proud."

Here's what else you should know about Vachal.

Vachal's mom is Filipino and her father is caucasian, making her a "hapa" (a term for half-Asian children) and she's proud to be one. "It's crazy that there has been such a huge response and I have been overwhelmed by it," Vachal told NBC News. "My mom was born and raised there... I'm so grateful to be considered one of their own even though I'm a 'hapa' baby."

2. Her Dad Looks Like Walter White From Breaking Bad

Last week, Vachal introduced her dad Rich to Levine by saying the following: "This is my father, Walter White." She was making a reference to the infamous Breaking Bad character played by Bryan Cranston, but Levine took one look and agreed that Rich does have a certain resemblance to White.

3. She Played Sports In College

Vachal played varsity lacrosse and soccer at Swarthmore College, but during her senior year, a serious injury ended her athletic pursuits. "I got this very intense concussion my senior spring that actually propelled me into making music," she told Music Times. "While I was recovering, I ended up writing my first four songs and that kind of started the whole thing. When I started playing in New York I would travel into New York on weekends and play little shows here and there."

4. She's Had Lots Of Different Jobs To Pay The Rent

New York City is a tough place to live, but Vachal was able to make her music career work, while juggling other jobs. "Living in New York, sometimes you're lucky and sometimes you're very unlucky," she told NBC News. "I went through many different waitress jobs. I worked in a bakery. I worked in a bar ... From month to month it's really a surprise. It's like, 'How am I going to make this work?'" Seems like she found a way!

5. She Performed Regularly In NYC

Vachal worked with Ken Rockwood of Rockwood Music Hall on her recent EP Crinkle Bloom , released in 2014. She also released Appleseed in 2011.

7. She Is Also Into Drawing & Painting

Vachal is an artist in more ways than one. Her Instagram account shows her love of drawing and painting, and she even has had artwork displayed. "She is also a great artist and painter," Swarthmore women's soccer coach Todd Anckaitis said in a statement. "In fact, she did a piece of art that still hangs over my couch at home."

See? There's so much more to Amy Vachal than we ever even knew. Now, here's hoping we learn more about her as she continues to slay on The Voice.