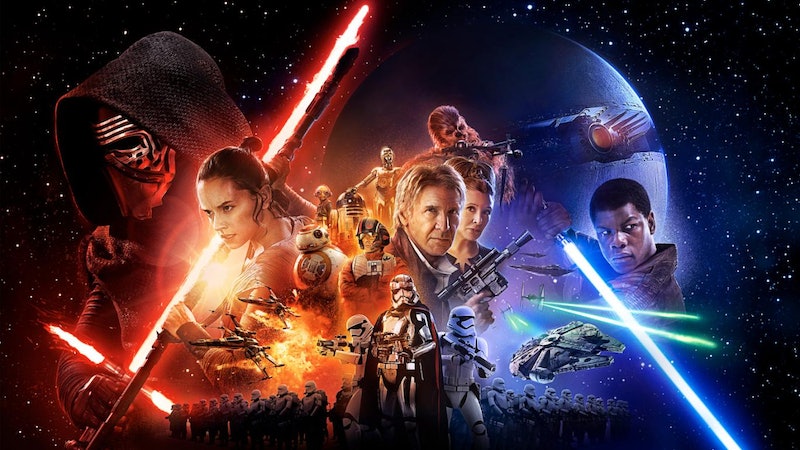 Stay woke, Star Wars fans, because the movie is almost here, just in time for the holidays. And while we wait for the release, treats have been coming practically every day — including the Star Wars: The Force Awakens soundtrack. Of course, the tracklist isn't that big a deal, as it appears to be free of major spoilers, unlike the Star Wars Episode I: The Phantom Menace's yikes-worthy scenario where Qui-Gon's death was given away in a track title. But even still, knowing where to get the Force Awakens soundtrack is valuable information, as it does provide a few hints about what's to come.

Information about the seventh Star Wars film, directed by J.J. Abrams, has been carefully kept under wraps (leaving fans to be all the more surprised when it hits theaters), but what we do know about the storyline is that it takes place 30 years after Return of the Jedi. It also features a handful of fresh Hollywood faces, like John Boyega, Lupita Nyong'o, Adam Driver, Daisy Ridley and Oscar Isaac. This will be the first Star Wars film in over a decade since 2005's Star Wars Episode III: Revenge of the Sith. It's truly setting up to be a Star Wars film for the new generation, as well as the franchise's core fanbase.

The soundtrack is set to be released on Dec. 18, the same day The Force Awakens hits theaters. You can preorder your copy on Amazon or at the Disney Music Emporium to cash in on a poster bundle. Here are the titles of all 23 tracks from the soundtrack below (some movie spoilers included):

1. Main Title and the Attack on the Jakku Village2. The Scavenger3. I Can Fly Anything4. Rey Meets BB-85. Follow Me6. Rey’s Theme7. The Falcon8. That Girl with the Staff9. The Rathtars!10. Finn’s Confession11. Maz’s Counsel12. The Starkiller13. Kylo Ren Arrives at the Battle14. The Abduction15. Han and Leia16. March of the Resistance17. Snoke18. On the Inside19. Torn Apart20. The Ways of the Force21. Scherzo for X-Wings22. Farewell and the Trip23. The Jedi Steps and Finale

So here's what I can then guess about the film from some of those titles:

1. The Movie Will Kick Off With An Explosive Battle At Jakku

Can anyone say action sequence overload? Regardless, I can assume it's going to be epic introduction into the film.

The new Star Wars droid is no R2D2, but it is really, really, really cute. Looks like Daisy Ridley's character, Rey, may gain a very useful new friend. Plus, children and collectors everywhere are bound to be thrilled by BB-8 action figures and the like.

3. Finn's Confession Might Be Grounds For That Counsel With Maz

Finn (John Boyega), Rey and friends may very well seek out Maz (Lupita Nyong'o) for advice. What is Finn confessing anyway? There may be more to this stormtrooper than meets the eye. Abrams said in an interview with Entertainment Weekly that Maz's eyes in particular are an important aspect of her character. Perhaps Maz is some sort of clairvoyant and will predict Finn's future? We'll see.

Adam Driver has come a long way from playing Hannah's offbeat boyfriend in HBO's Girls. He's a Star Wars baddie now, but can he come close to Darth Vader's infamy? Fan theories floating around the web also speculate that Kylo Ren is in fact, Luke Skywalker. It certainly doesn't help that Force Awakens actor Mark Hamill said in a recent interview with The Week that Luke won't be returning as an "innocent farm boy." Added Hamill, "Obviously you're seeing him in a very different time in his life, there are lots of surprises in this movie. You're going to love it." The possibilities are endless.

5. "The Ways Of The Force" Will Come To Aid Our Heroes At The End Of The Day

Or at least I hope the Force will pave the way for good to prevail. Then again, this film is supposed to surprise audiences in a multitude of ways. Nothing is certain.

While much about The Force Awakens is up the air, what is known for sure is that fans can count on the soundtrack to memorably take them through the film's highs and lows. John Williams is pretty much the film score king and no stranger to making beautiful tunes for the Star Wars franchise. With the soundtrack coming right before Christmas, Star Wars fans will more than likely find themselves switching out Mariah Carey's "All I Want For Christmas Is You" with instrumentals from The Force Awakens.