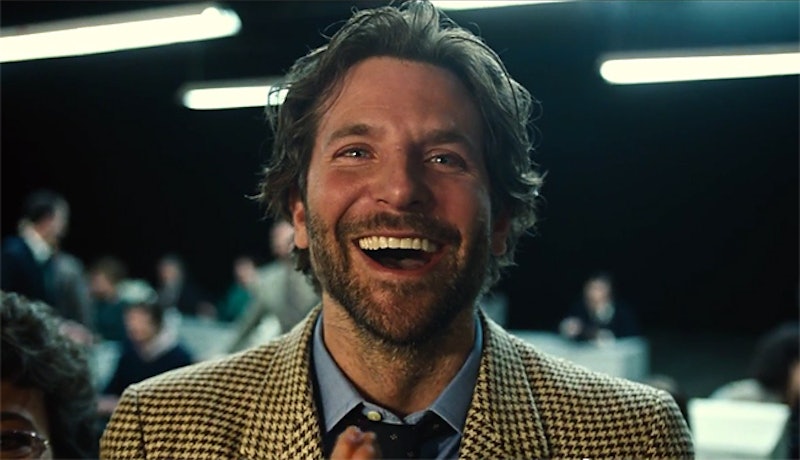 In all the excitement lately, I think we may have forgotten that Bradley Cooper has an important part in Joy as well. This is partly on me, guys, because I got so distracted by Jennifer Lawrence storming around in the first trailer that I kind of forgot to be concerned about anyone else. But with the newly-released Joy trailer, I'm reminded that, not only is Bradley Cooper in this movie, but also that he's looking like a force to be reckoned with so far. Lawrence, of course, plays the film's title role, Joy Mangano, inventor of the Miracle Mop, and the businesswoman that the movie revolves around, so she is rightfully the focus. But the ways that Cooper's character steals focus around the edges the more times you watch it is pretty exciting.

I don't know specifically what role he plays, because IMDb is refusing to tell me, but it looks like he's a man who believes in Joy early on, and encourages her to keep pressing forward in her endeavors — even when she hears "no" as an answer. And, even though the two don't seem to have a romantic dynamic, their chemistry is really appealing in the short glimpse we get of it from the trailer. Cooper is just playing super real, super grounded, with none of the posturing that we've seen from him in other roles, and I couldn't be more excited about it.

Because, as intriguing as Jennifer Lawrence is, I think the reason she's paired with Bradley Cooper so much is that the two of them together are greater than the sum of their parts. So, I can't wait to see how they play off of each other — and specifically how he plays off of her — in this next film. Joy will hit theaters on Dec. 25, Christmas Day, but you can watch the trailer down below right now and as many times as you want, for proof that I know what I'm talking about.

There's more than one star in this movie, and there's your proof right there!