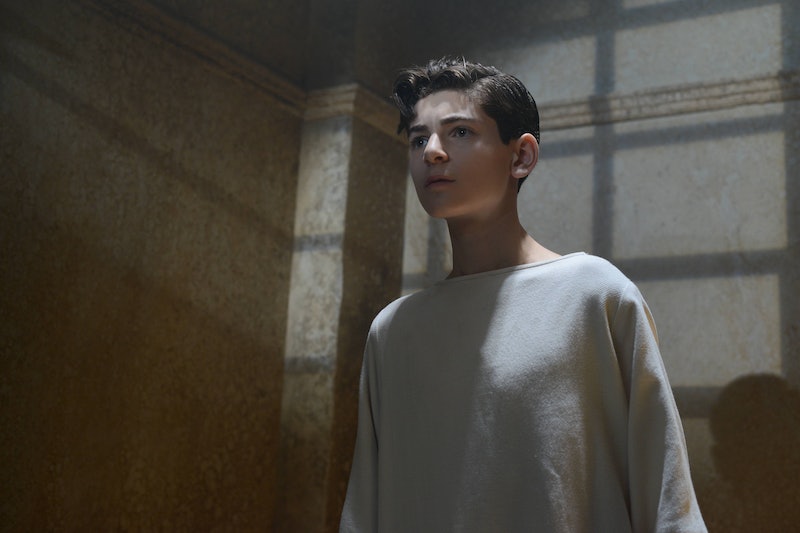 In case you haven't noticed, Gotham is not the safest city in the world to live in. I mean, call me crazy, but when killing starts to become just about as common as breathing, then you may want to think about getting your loved ones the heck out of dodge. (But hey, who needs logic in the face of compelling storylines?) So now that the war with Theo Galavan and his army of monks is finally getting underway, it's safe to assume that some characters are going to die in the Gotham Season 2 fall finale. So who will meet their maker and who will live to fight another day? Given the fact that we're dealing with a prequel series, there are of course a few characters we know who need to stick around.

Take Bruce Wayne, for example. He may have a target on his back right now, but there's no way this "Son of Gotham" is in any real danger of dying. After all, we know that he grows up to become Batman, so it's hard to get too worried about his well being, considering there's just so much of his journey left to tell. The same goes for all of the great comic book stand-bys like Penguin, Edward Nygma, Jim Gordon, Selina Kyle, and Alfred. They have to stick around in order to stand alongside (or face off against) our caped crusader, which means they're all relatively safe… for now.

That's not to say that the Gotham writers won't decide to go off book in some big way. In fact, I'm sure they try to take certain liberties with each character's comic book counterpart to help keep things interesting. However, I think for the time being some characters are in much more danger of meeting their demise than others in this midseason showdown. And while they themselves may not be considered a main character, their death would certainly spark a significant reaction for our leading stars. Such as…

Let's face it, Leslie's death would be just the right catalyst to send Jim Gordon over to the dark side once and for all. He's been tethering on the edge all season, so losing the one good thing in his life would undoubtedly be his breaking point and make for a pretty interesting plot development.

He's made for a great villain, but just like any other major Big Bad in Gotham, he needs to be taken down. Plus, we all know at this point that he'd never surrender.

Here's someone else who helps to keep Jim Gordon's demons in check. It'd be hard to send Gordon over the edge (which is where I think this season is going) with this guy still around. Not to mention that the role of Captain seems to be a bit of a revolving door type of position. Something tells me it won't be long before the job needs to be filled again.

I hate the idea of losing such a fun and interesting character that Donal Logue has created, however, I can't help but worry that Jim's partner in the fight against crime will somehow get caught in the crosshairs of this war. Perhaps Jim would even blame himself for Bullock's death and spiral even further down his dark rabbit hole.

Because any love interest of Bruce Wayne's is pretty much doomed, right?