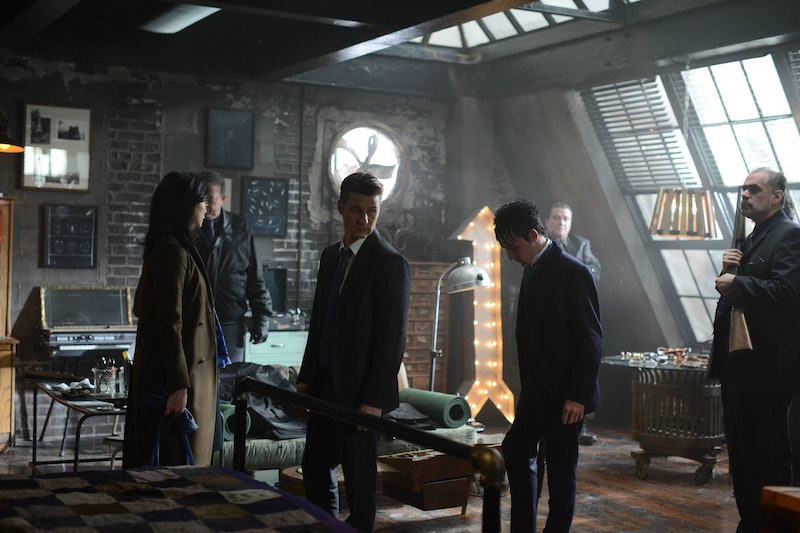 From The Walking Dead to TGIT, the "fall/winter finale" has become a tradition that makes for a huge, several month break in the middle of a TV season instead of several random weeks off for the holidays spaced out. Gotham's fall finale will be on Nov. 30, as the saga of Theo Galavan's quest for power is wrapped up, but when will Gotham Season 2 return after the fall finale? Fox has promised, via the official Gotham Twitter account, that the Gotham's midseason premiere will air in February. And since there don't seem to be any plans to shift the show's timeslot from Monday nights at 8 p.m., that means the next episode of Gotham will be due on one of the five Mondays in February. That's a lot of options, but I'd personally guess that Fox will drop it somewhere in the middle, on Feb. 8 or Feb. 15.

And though the long break will be torturous for anyone curious about what's next for Gotham City, most of the season to date will wind up wrapped up neatly. But there's lots of things promised in the second season that haven't happened yet. The rest of the second season will be filled with new characters, and, since the Galavan plot seems to be heading towards its ending, new storylines.

The biggest hanging thread is what's going on at the experimental labs of Indian Hill. So far, the Firefly has been taken into the lab and potentially saved from extreme burns on her entire body. Otherwise... basically nothing. That's got to play into the season's conclusion.

Professor Strange, a comics villain, will be introduced at some point during Season 2, played by Jurassic World's B.D. Wong. As the head of Indian Hill, he will probably be a Dr. Dulmacher-esque figure, an intimidating and evil villain.

Nora and Victor Fries were also added to the upcoming cast, and will be making a pre-supervillain appearance later in the season.

Ed might be Penguin's best buddy for now, but it seems that Leslie Thompkins is on his track, and will ultimately uncover that Kristen Kringle's death was his fault — he'll be going down before Season 2 ends.

Penguin used to be the King of Gotham City, but he lost all of his control when Galavan came to town. But since the comics Penguin is a successful nightclub owner, he's got to somehow recapture his place and his money.

As a whip-wielding villain, Tabitha also seems poised to potentially help Catwoman find her calling as a villainess. And since she just helped rescue Bruce from Galavan, Selina's continued descent into morally ambiguous territory will also be a part of the second season.

Remember, she didn't die when she fell out of the window, just went into a coma. So she's still there, waiting to make her move on Jim. Wouldn't it be crazy if the end of Gotham Season 2 was Barbara and Jim running away together? Probably won't happen, but still — a villain can dream, and she has a very specific idea of what her romance with Jim should look like.