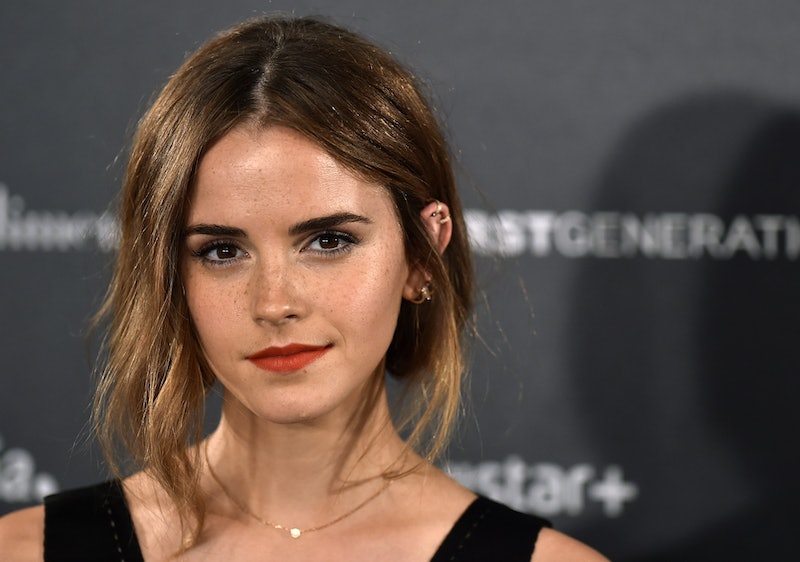 Remember last year, when Emma Watson delivered an awesome feminist speech at the UN that called both men and women to fight for gender equality? If the powers that be had gotten their way, it might have had a very different impact. In a new interview with Porter magazine, Watson revealed that she was asked not to use the word "feminist" in her speech about the HeForShe campaign, because it might be "alienating" to people who don't understand what the word truly means. (Equality across all genders — nothing more, nothing less.)

Watson didn't disclose who exactly advised her against using the word, but it does seem a little silly to make a speech about feminism without being able to say it. And as Watson can probably tell you firsthand, the name for an important movement is not exactly the same as "Voldemort," am I right?

In the magazine, Watson said:

I was encouraged not to use the word "feminism" because people felt that it was alienating and separating and the whole idea of the speech was to include as many people as possible. But I thought long and hard and ultimately felt that it was just the right thing to do. If women are terrified to use the word, how on earth are men supposed to start using it?

This response deserves some serious applause. Even though ignoring that advice might have been a risky move, it's a good one for Watson to have made. It sucks, but it does seem like feminism has gotten a bad rap, especially recently. Over the past couple of years, there have been far more celebrities than I care to count who have denounced the idea of feminism because their understanding of the movement leads them to think it's all about bringing men down to lift women up, and that's simply not true. We should all lift each other up, and that starts with changing things like the wage gap. But if we as a society continue to perpetuate the idea that feminists hate men and shy away from educating people for fear of alienating them, that will never change.

Besides, Watson's speech (and the HeForShe campaign in general) is all about getting men involved in ensuring equal rights for their mothers, sisters, wives, and the other women in their lives. Like she said, if women can't own feminism, we can't expect men to, either. And since it's equality that we feminists are fighting for, it's kind of important to make sure that everyone is comfortable getting involved — and that we're all on the same page.

There are far scarier words out there than "feminism." Watson is right; avoiding the word won't stop people from being scared of it, and the more we talk about feminism in no uncertain terms, the better the chances we have at achieving equality someday.

Watson deserves major props for the decision she made — and the fact that she got up on that stage at all. Even more than a year later, her words still ring true.