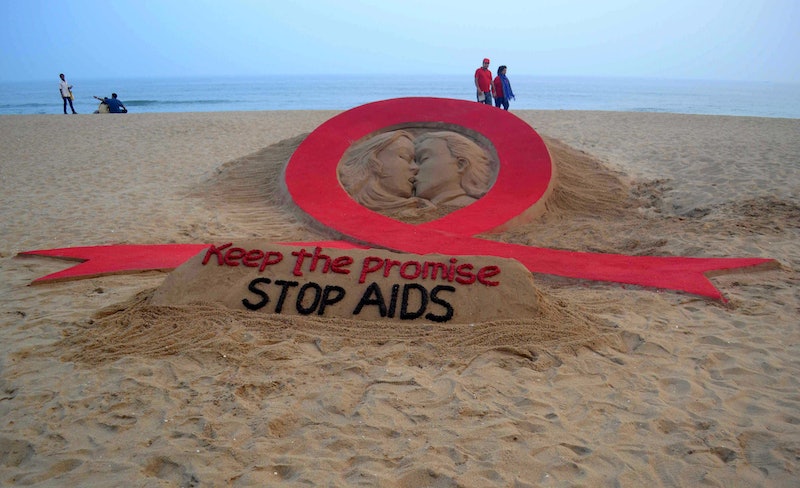 Since 1988, December 1 has been declared World AIDS Day. Not only is it a day to remember those who were lost to AIDS, but to show support to those living with HIV/AIDS all over the world, as well as educate people on the facts about the virus. According to The Foundation for AIDS Research, every day roughly 5,600 people contract the virus here in the U.S., and in 2014 alone, 1.2 million people died from AIDS. Since the start of the pandemic in the early ‘80s, almost 39 million people have died due to AIDS-related illness. These numbers are terrifying. But although the numbers do feel like a knife to the heart, it doesn’t mean we can’t hope for better in the future.

This year’s World AIDS Day campaign is ‘Think Positive: Rethink HIV,’ in the hopes that we can finally put to bed all the ignorance and stereotypes that have far too long created a stigma surrounding HIV/AIDS and those living with the virus. Through a variety of efforts from bake sales meant to raise awareness to tweeting facts and figures online (#RETHINKHIV), there is something for everyone to do on World AIDS Day to help kick the old misguided ideas about HIV/AIDS to the curb.

So instead of letting the stigma of HIV/AIDS warp your understanding of the virus, it’s time for you, for all of us, to rethink it. Here are eight facts about HIV/AIDS that will make you stop and re-examine your thoughts on the virus.

1. Ignorance Spreads HIV More Than Anything Else

If you feel so inclined, you can make your way to a kissing booth in Soho (London) on World AIDS Day from 1-3 p.m. There, you can "expect hunks, drag queens, a little bit of craziness and lots of fun."

The reason for the kissing booth? Its message is a clear one: “Kissing Doesn’t Spread HIV. Ignorance Does.” Since that’s the case, you need to get your kiss on to make a statement.

2. Most People Know That Kissing Doesn’t Spread HIV (But Most Isn’t Enough)

According to the findings by the National AIDS Trust, 84 percent of people are well aware of the fact that kissing absolutely, positively does NOT spread HIV. However, that other 16 percent really needs to step into the 21st century, because they could be missing out on a great makeout session with someone awesome.

3. HIV Doesn’t Mean Your Sex Life Is Over

Just as the case with all STIs, an HIV diagnosis doesn’t mean your sex life is over like it did back in the day when scientists were still unclear of how it was transmitted. Today, if you’re on effective treatment for HIV, you are non-infectious ― a fact that the National AIDS Trust suggests you tweet on World AIDS Day. In fact, 85 percent of those living in the UK with HIV are not infectious.

But while this may be the case, it doesn’t mean you should always be having unprotected sex ― there are still other STIs out there.

4. The Majority Of Babies Born To HIV Positive Women Are HIV-Free

It may seem that a baby born to an HIV positive woman is basically a shoe-in for the virus, treatments are making that less and less of a possibility. Although there is still a chance that the virus can be passed from mother to child, 99.5 percent of children born to HIV positive moms are born free of it.

5. HIV Is No Longer A Death Sentence

Although HIV was once a guarantee that your life would be cut drastically short due to an AIDS-related illness, science has put an end to all that. Now those living with HIV can expect to live not just normal and healthy lives, but a normal life expectancy, too.

6. Having HIV Doesn’t Mean AIDS Is A Certainty

Not only are people living long healthy lives with HIV, but the appropriate treatment can keep one’s HIV status in tact without ever reaching the point of AIDS. And, if that weren’t something that forces you to rethink your ideas of the virus, even those who do end up with AIDS can actually recover from it and go back to HIV status. In the UK, for example, only 0.3 percent of HIV positive people end up developing AIDS.

7. It Isn’t Illegal To Keep Your HIV Status To Yourself

Because HIV/AIDS is no longer a death sentence, in the UK you’re actually protected by law if you choose to keep your positive status to yourself, whether it be in the job place or in a relationship. However, if you are positive, when it comes to the latter situation, you do owe it to your partner to at least practice safe sex, especially if you’re not taking treatment for the virus that makes you non-infectious.

Although that may be the case in the UK, here in the States things are a little different. While you do not have to share your status at your place of work, when it comes to sexual partners you can be charged with a felony if you knowingly transmit HIV to someone. In other words, know your rights and practice safe sex, no matter your status.

8. The Fastest Growing Group Of Those Living With HIV Isn’t What You Think

If you’re still living in the 1980s where HIV/AIDS was something that "only" happened to young gay men, then it's time for a wake-up call. According to research, at least in the UK, the fast growing group of people living with HIV are 50 years of age and older. There’s also the fact that women make up 51 percent of all HIV cases worldwide and is the “leading cause of death among women of reproductive age,” according to the Kaiser Family Foundation.

Although here in the U.S., the Center for Disease Control has found that the group most affected is gay and bisexual men, with African American men being affected even more so, the point is that the stigma that HIV/AIDS only affects men who have sex with other men is way off.