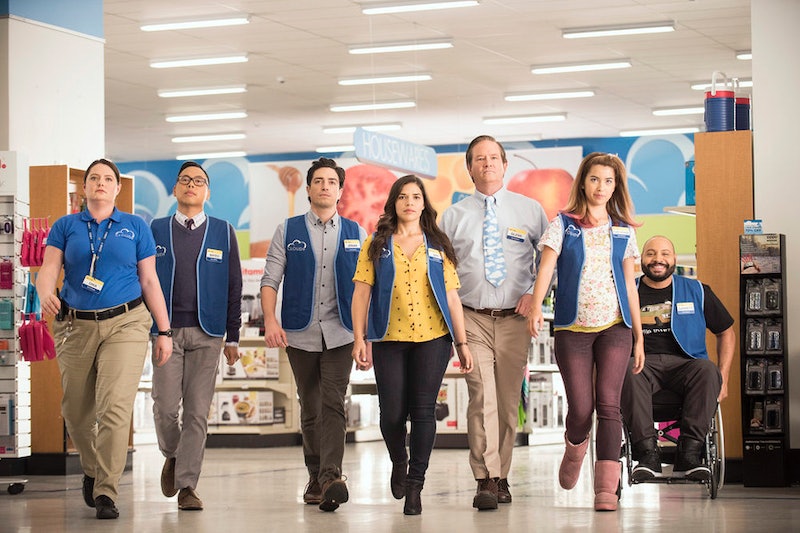 So, NBC's latest workplace comedy Superstore is set in... well, it's set in a superstore. Cloud 9 is a chain store filled with low prices and high tensions between employees. It's also where the cast of Superstore works, including America Ferrera's floor supervisor Amy and Ben Feldman's new associate Jonah. So, when next Black Friday rolls around will customers be lined up outside Cloud 9, waiting to get their hands on a new flatscreen television? Unfortunately they will not, as Cloud 9 isn't a real store.

What is real, however, is the big-box store that Cloud 9 takes its influence from. You've likely stumbled into it at one point or another as it's the big-box store to end all big-box stores — Walmart. While Cloud 9 is meant to be a stand-in for any type of big-box store, many design aspects of the show seem to be influenced by Walmart. This is unsurprising, as the store was placed at number one on the 2014 Fortune 500, meaning that — according to revenue — it's the largest company in the world. Here are just a few of the ways that Cloud 9 seems to take inspiration from Walmart, even though the network hasn't confirmed any link.

Walmart's iconic vests allow any business-casual laden employees of Walmart to be differentiated from and business-casual laden clientele of Walmart. Cloud 9's use of vests as uniforms not only sticks true to its possible influence, but also allows the characters to let a little bit of their personality shine through in what they choose to wear under the vests.

Cloud 9 of Superstore features high ceilings, fluorescent lights, and a blue-on-white color scheme that permeates the store. This is nearly identical to Walmart, whose blue-and-yellow color scheme and bright lights define the atmosphere of the store.

Walmart, and other big-box stores, are often known for their store-wide intercom announcements. Cloud 9 has one employee, Garrett, dedicated solely to the task of intercom-operator.

What else does Cloud 9 have in common with the big box store? Tune in Mondays on NBC to find out.