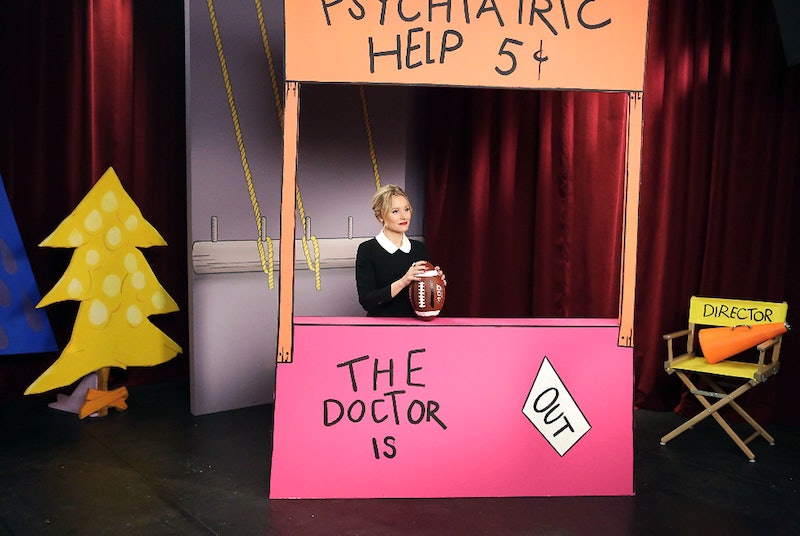 I love everything about the holiday season — but one of my very favorite traditions is watching A Charlie Brown Christmas. Like countless others, I can't remember a year when I didn't watch the movie. The season would feel incomplete without Charlie opining about the fact that nobody likes him (do we have to have a holiday to emphasize it?!), Snoopy dancing like nobody's watching, and the now-iconic "Charlie Brown tree." Since the movie is such a holiday staple, it was fitting that everyone from Barack and Michelle Obama to Sarah McLachlan to Boyz II Men appeared in the ABC special It's Your 50th Christma s, Charlie Brown to say "happy anniversary" to the iconic, lovable outcast and the rest of the Peanuts Gang.

Kristen Bell hosted the special — and she kicked it off by noting that "the holiday season wouldn't be the same without Charlie Brown." But, why do we love Charlie so much? The answer is pretty simple and Charles Schulz put it best: "His daily struggles remind us of our daily struggles... He's the kind of kid you'd like to have as a neighbor," he explained in archive footage that was shown during the special. And it's true — Charlie is excruciatingly relatable, and he unabashedly voices the insecurities that so many of us experience. But, despite that, he never gives up — even though he lost a total of 942 baseball games during the comic's run. (But who's counting?)

Charlie is universally loved by all — and I'm sure he'd appreciate that so many people were eager to celebrate him. Even the President and First Lady took a few minutes out of their busy schedules to say a few words. Obama noted that he would keep his comments brief, because he knows "that adults sound like 'wah wah wah'... Especially in Washington." The special also featured performances from Sarah McLachlan, Boyz II Men, Kristin Chenoweth, and Pentatonix. They shared anecdotes about their love for the movie — and many of them sounded familiar. Before performing a beautiful version of "Christmastime Is Here," McLachlan said that she grew up watching and singing along to A Charlie Brown Christmas.

Charlie was rightfully showered with praise during the special — but we can rest assured that he won't let it get to his head. In fact, when A Charlie Brown Christmas won an Emmy, the presenter inexplicably mispronounced his last name and the movie's producers quipped that "[Charlie] is not used to winning" in their acceptance speech. But that's the irony of Charlie Brown — he really is a winner; he just doesn't know it.

The special concluded with an epic performance by Pentatonix with the All American Boys Chorus. They appropriately sang the same tune that closes out A Charlie Brown Christmas — "Hark the Herald Angels Sing." All in all, the special was a lovely tribute to one of the best holiday movies of all time. It struck the perfect balance of nostalgia, great music, and dry wit.

And now if you'll excuse me, I'm off to buy a Charlie Brown Christmas tree.