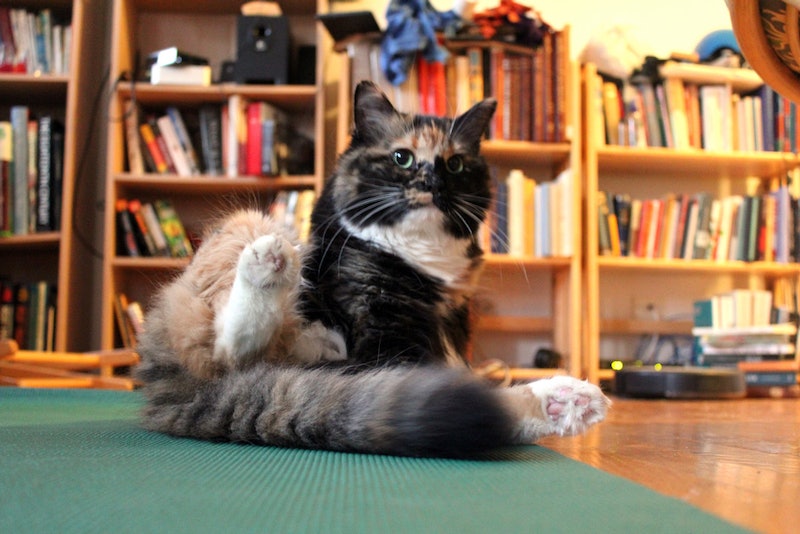 If you're a cat person, I've got some stellar news to share with you. Cat yoga is now officially a fitness trend, my feline-loving friend. In June, yogis in Illinois were treated to a rare kitty yoga class in collaboration with a nearby no-kill shelter. That same month, news broke that New York's first ever cat cafe, Meow Parlour, is currently offering cat yoga classes. But since then, word on this feline-oriented fitness fad has been all but non-existent. You know, ahem, the cat got its tongue. But cat ladies (and fellas) the world over can now commence rejoicing, because cat yoga has made its way to Australia. Jumping the pond surely cements its status as a full-fledged fitness trend, no?

Like Meow Parlour, Syndney, Australia-based Catmosphere is a cat cafe. In fact, according to its website, it's the first global space cat cafe franchise. Their mission? "To seek out new life and new civilizations, to boldly go where no cat has gone before." Apparently, that includes yoga class. So, in an effort to blaze new frontiers in felinedom, Catmosphere has introduced cat yoga. These 60-minute classes include 45 minutes of yoga with cats milling about, capped off with 15 minutes of "cuddle time" with said loitering felines. And with a pitch like this on the cafe's Facebook page, who could resist?

Want to do yoga with cats walking all over you? Want to be an actual bridge for cats while in bridge pose? Want to be pounced on while in pigeon pose? Book meow for cat yoga!

Not to mention you could wind up practicing your downward-facing dog alongside kitty royalty like Princess Leia. I think that says it all, really.

If you're just dying to try this furry fad where your every move will undoubtedly be scrutinized by your four-legged counterparts (because, cats), break out your mat and book a class at the nearest cat cafe or other cat-friendly facility offering cat yoga. Here are five more examples I scrounged up. But, hey, if there isn't a cat yoga class near you, you could always move to one of the top cities for cat ladies to up the odds of living in the next cat yoga hub.

DC's first cat cafe is located in Georgetown and includes all of the prerequisites for a purrfectly good time: chocolate cake, adorable cats, and yoga sessions spent deftly trying to avoid injuring your new feline BFF.

Not only does San Fran's KitTea cat cafe offer cat yoga, it offers monthly cat yoga passes for the true cat-loving yogi among us. Besides, it's called Cats on Mats. Stahhhp.

If you live in the Pacific Northwest anywhere in close proximity to Portland, you're in luck! Purrington's, which opened in January of 2015 to find shelter cats permanent homes, offers an hour-long "Gentle Cat Yoga" class sure to warm your heart, spirit, and that muscle in the middle of your back.

Cornering the cat yoga market in the South is none other than Jerusalem Christian Church in Louisiana, who offers Yoga with Cats in conjunction with Acadiana Animal Aid. Plus, the class is taught by the church's pastor, Ashley Sherard, bolstering your theory that God is in fact a cat lady.

If you believe Cat Town Cafe's website, this isn't just any cat cafe — it's America's first. This Oakland-based establishment offers Cat Zone Yoga every Thursday at 6:30 and every third Wednesday at noon. For the bargain price of only 20 bucks, you get 75 minutes of guided yoga posturing in the company of precious adoptable kitties.