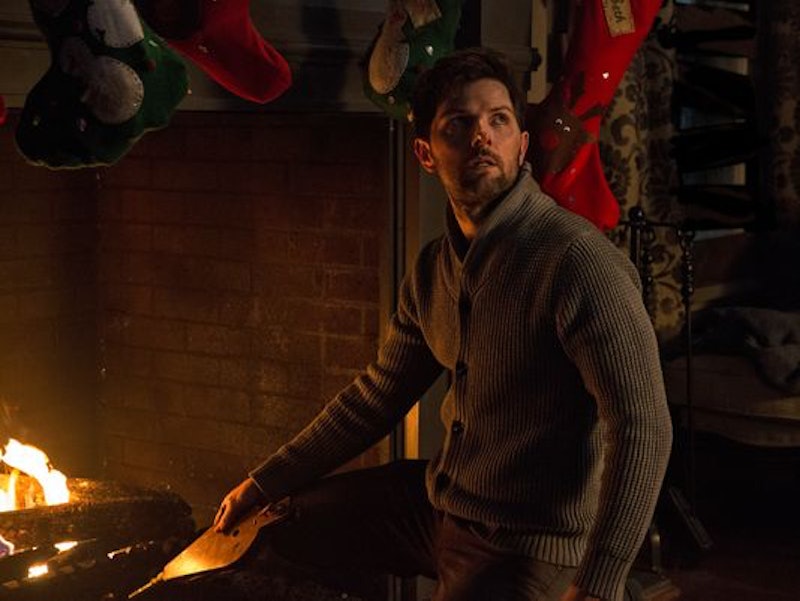 Christmas movies are a surprisingly diverse bunch. There's the heartwarming classics like It's A Wonderful Life, family-friendly comedies like Elf, not so family-friendly comedies like The Night Before , and oh yeah, Christmas horror movies. Krampus is the latest entry into this rare genre, but is Krampus scary? The film stars Adam Scott of Parks and Recreation fame, as well as Anchorman's David Koechner, and the two funnymen even have a humorous conversation about the dryness of their Christmas dinner in the trailer, which lead me to think that Krampus is more of a horror spoof than a straight up scary movie. But then the trailer takes a decidedly dark turn, and even Scott plays it straight as his entire family is tormented by a horned demon and a many-toothed clown. So what should viewers expect from Krampus?

For one, the movie is not straight up horror. Director Michael Dougherty told IGN that the film is a "horror/fantasy/comedy", which are the same three genres IMDb attributes to the film. So in a word, Krampus is going to be genre-bending. Does this mean it's going to be like Gremlins, another horror/fantasy/comedy centered around a Christmas theme? Maybe. While Gremlins was rated PG, it actually inspired the creation of the PG-13 rating. Krampus is also PG-13, while most true horror movies tend to be rated R.

There are a few factors that suggest Krampus will be a good deal scarier than Gremlins, though. For one, the trailer includes multiple jump scares — a horror film hallmark — and you can bet they're saving the best ones for the theater. Then there's the film's pedigree. Dougherty's directorial debut was the 2007 Halloween film Trick r' Treat, which is now considered one of the best horror movies of this century, and though it also had comedic elements, it's still a legit scary movie.

Another area where Krampus beats Gremlins in the scare department is the creatures in the film. So far, fans have glimpsed a terrifying clown and a toothy stuffed bear, and both are pure nightmare fuel. Then there's Krampus himself, who hasn't been glimpsed fully but is sure to be the scariest monster of all.

There's also the folklore aspect of it. If you grew up in Germany, you probably believed in Krampus growing up. According to Germanic tradition, Krampus is like the darker version of Santa Claus, who punishes children at Christmastime who have misbehaved by whipping them with birch branches. So if Krampus was a part of your childhood, the movie should be extra scary. Merry Christmas, Germany!

The bottom line is that Krampus is no kids flick; it's going to be scary. Will it be scary enough to cause you to lock up extra tight on the night of December 5, when Krampus traditionally visits homes? That remains to be seen, but you're probably not going to want to see this film alone.