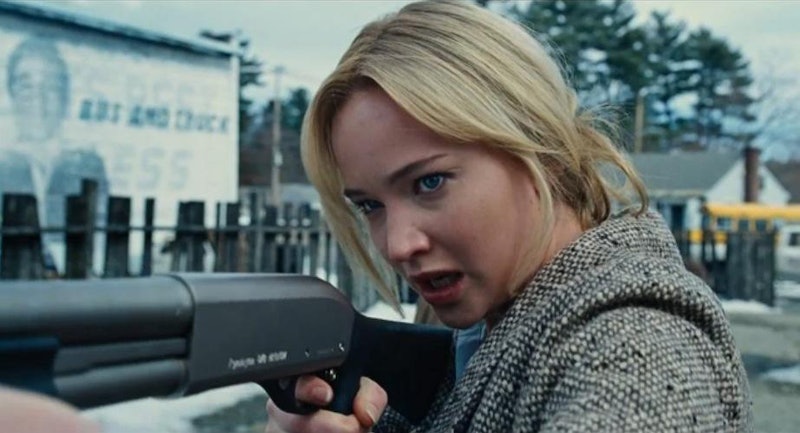 If you know me at all, you know that I love no time of year more than Oscar season, the vaguely-defined, unnaturally long period that tends to usually fall between late September and the middle of January. During this time, the movies that hit theaters are typically the best of the bunch, the ones that'll be vying for awards in a few months' time, and critics and audiences alike waste far too much time analyzing the potential of every film, actor, and director there is. Basically, it's my heaven — and this year's season is shaping up to be especially great. That's because the normally difficult question of what movie will win Best Picture is way harder than usual — meaning, in other words, that there's a huge amount of great movies out there to choose from.

From Carol to Creed, 2015 has produced some incredibly good films, plenty of which are expected to be familiar awards picks over the next few months. Even better, many of these movies are feminist, or starring actors of color, telling "untraditional" stories, or, in some great cases, all of the above. 2015 has been a great year for film, and when it comes time for the Oscars, here's how I imagine the Best Picture nominees will stack up, starting with the eight movies most likely to earn nods:

Spotlight: My personal choice for the year's best movie, Spotlight (above) is universally acclaimed, and tells the type of jarring, heartbreaking story loved by Oscar. It'll be a huge shock if it's not included in the mix, and it has a good shot of winning the whole thing.

Room: My second favorite movie of the year, Room is an emotionally wrenching, wonderfully acted story that's bound to make even the toughest Academy member tear up. There's no way it won't be nominated.

Carol: Todd Haynes' '50s-set romance is about as sure a bet to get a Best Picture nomination as it is for its stars Cate Blanchett and Rooney Mara to snag acting noms. In other words, very sure.

Brooklyn: The Saoirse Ronan-starrer is a more subtle movie than many of its peers, but it's no less powerful. Expect to see it make the cut.

Creed: Before the movie's Thanksgiving release, I would've put Creed (above) as a total longshot, but thanks to stellar reviews and word-of-mouth support, it'd now be a bigger surprise if it wasn't considered a frontrunner.

The Big Short: A star-studded drama about a real-life crisis that affected practically everyone? Yeah, you can bet The Big Short will snag a nomination or two.

The Martian: I liked The Martian just fine, but personally, I don't think it deserves a Best Picture nod. However, I'm expecting everyone to disagree with me on that.

Concussion: The Will Smith-takes-on-the-NFL film will undoubtedly make waves upon its Christmas release, but it's less certain how it'll fare with awards. It certainly has a chance, though.

The Danish Girl: I don't think The Danish Girl (above) is worthy of a Best Picture nomination, as its acting is far better than its story and script. However, it wouldn't be the first time a movie with those attributes managed to grab a nod — remember The Theory of Everything?

The Revenant: Leonardo DiCaprio fights a bear, divides every critic imaginable. It'll be interesting to see what the Academy decides here.

The Hateful Eight: Quentin Tarantino's latest film will certainly stir up plenty of talk, but it's not yet known if that'll result in a Best Picture nod. At the very least, expect its screenplay to be a honored often over the next few months.

Don't Count These Guys Out

Inside Out: The Pixar tearjerker (above) was a critical and commercial favorite, and it could just edge out of the Animated category into the main race.

The End of the Tour: James Ponsoldt's film about David Foster Wallace should be nominated, but it very well might not be, due to its summer release and general absence from recent Oscar-focused conversations. Still, you never know.

Truth: The Cate Blanchett-starrer isn't quite as good as some other contenders, but it's far from forgettable. It might just be too competitive of a year for it to earn a nomination, though.

Anomalisa: Charlie Kaufman's stop-motion dramedy is winning raves, but it could be too offbeat to make it into the most mainstream category.

Star Wars: The Force Awakens: Big-budget franchises rarely make it into the Best Picture conversation (I'm still hurting from The Deathly Hallows: Part 2's snub), but if Star Wars is done right, it could just be the exception.

But Yeah, Probably Count These Guys Out

Trumbo, The 33, Black Mass (above), The Walk, Steve Jobs, Bridge of Spies, Suffragette, Beasts of No Nation, Sicario

It's not that the movies listed above are bad — in fact, most of them are pretty decent, with one (Sicario, I love you) being really, really good. But they all sounded a lot better on paper than they did in reality, and most likely won't make the cut for Oscars, at least in the Best Picture category. Better luck next time, y'all.

More like this
Here’s Everything Coming To & Leaving Netflix In December
By Jake Viswanath
You Can Finally Stream 'Ticket To Paradise' At Home
By Chloe Foussianes
Jodie Turner-Smith & Joshua Jackson's Relationship Timeline Includes Her Proposing
By Jake Viswanath
J.Lo Wants To Make A Sequel To This Movie With Ben Affleck
By Jake Viswanath
Get Even More From Bustle — Sign Up For The Newsletter