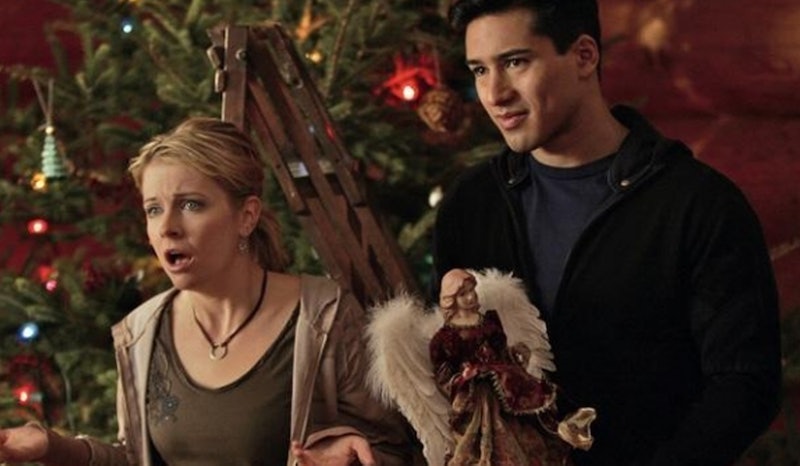 I'm a total sucker for TV movies, especially around the holidays. Plenty of networks air original Christmas movies to get viewers in the holiday spirit, and often these movies provide plenty of happy feels to carry you all the way to January. Of course, then there are the Christmas movies that get just a little, well... weird. ABC Family is notorious for making Christmas flicks that are just this side of bizarre. Sure, they're still ripe with holiday cheer, Christmas miracles, and plenty of mistle-toe induced kisses, but they also have things going on that aren't standard holiday fare, like, say... kidnapping.

Yep, not everything in these ABC Family Christmas films scream "Christmas cheer," and some plot points will make you question pretty much everything you think you know about what a holiday movie should be. Maybe that's because ABC Family prides itself on being a "new kind" of everything: and sometimes that means cranking up the craziness of your standard holiday film. Really, ABC Family's Christmas flicks are everything that a good (or so bad it's good?) TV movie should be, and that's slightly off. If you wanted to watch something basic, just pop on It's A Wonderful Life and have yourself a merry little Christmas. If you want to watch something so weird you're left wondering exactly what you just watched, well, flip your channel to ABC Family.

1. Santa's Workshop Is Saved In The Least Cheery Way Ever

In the 2006 film Santa Baby, Santa's daughter has forgone the whimsical career path that her birthright has pushed her towards for a satisfying career in marketing. Fortunately, it's her business savvy that eventually allows her to save her family business. Because what screams "Christmas miracle" like a great marketing strategy, right?

2. The Ghost Of Christmas Past Kidnaps Tom Arnold So The Ghost Can Hang Out In The '60s

There are about a billion variations on Charles Dickens' A Christmas Carol, but few involve a ghost knocking out the Scrooge character with a snow globe and tying him up with a string of Christmas lights in order to avoid their ghostly responsibilities in 1965. Not that Arnold's character didn't deserve it: he plays up the "bah, humbug!" thing so much that he forces kids to watch as their Christmas gift to him gets run over by a mail truck. This Scrooge is a whole lot scarier than any ghost could be.

3. Shannen Doherty Goes All Grinch On Everyone

In Christmas Caper, Beverly Hills, 90210 star and notorious Hollywood troublemaker Doherty gets tasked with caring for her niece and nephew on Christmas while simultaneously attempting to steal the Christmas gifts from all of the people in her hometown. She eventually learns the error of her ways, but not before hatching a plan to steal plasma TVs and pricey toys. This TV movie is weirdly instructional for sociopaths with no Christmas spirit.

4. Two Kids Go On A Shopping Binge With Counterfeit Cash And Then Get Hunted Down By Criminals

If you thought that children wouldn't understand the value of a huge back of counterfeit bills, well, you'd be wrong. In Christmas In Wonderland — which inexplicably nabbed both Patrick Swayze and Tim Curry — two kids learn that over-consumption can be the absolute funnest and buy out the mall with a bag of money that they find. Unfortunately, the cash is fake, and the criminals who printed it want payback. It's the perfect Christmas movie for when your kid is just a tad too young for Die Hard.

5. A Teen Actress Becomes A Ghost Of Christmas Present After Choking On A Martini Novel

Ashley Benson stars as a troubled teen actress in Christmas Cupid, who parties to hard at a club and dies by martini olive. Oddly, it's the most family-friendly way for this girl to go out, but still: an olive?! Talk about dark, ABC Family.

6. A Christmas Lover Gets Trapped Inside A World Where It's Christmas 24/7

Snowglobe is basically what would happen if Stephen King decided to write a made-for-TV Christmas movie. As in, it's basically Under the Dome.

7. A Woman Kidnaps A Man So She Won't Be Alone On Christmas (Yes, Really)

"She's holding him hostage, but he's stealing her heart" is the literal tagline of ABC Family flick Holiday In Handcuffs, and it makes all of the other movies on this list look tame by comparison. Just a quick run through of the plot: a woman is so desperate to please her parents on Christmas that she kidnaps a customer at the restaurant she works, smashes his cell phone to pieces, and drags him to a cabin in the middle of nowhere so he can pose as her boyfriend. The guy tries to escape, but before he can, he realizes that he's actually falling for this crazy girl. A better title for this movie would have been Stockings and Stockholm Syndrome.

Pour yourself a large helping of eggnog and pop one of these ABC Family flicks into the DVD player. Sure, they're cray, but what would the holidays be without them?