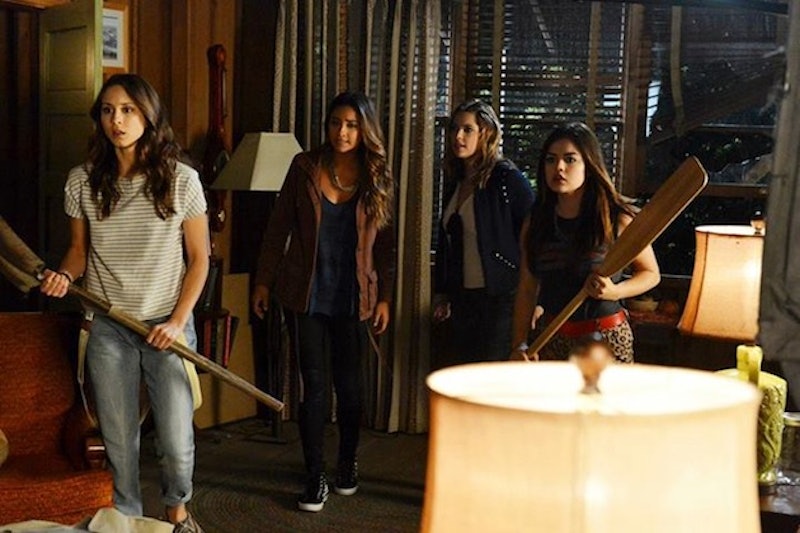 During last week's Pretty Little Liars , Hanna told the Liars that she's been holding onto Ali's journal. I flipped out. The Liars flipped out. This week, everyone's pissed at Hanna for keeping Ali's journal from them. The journal is full of Liars and non-Liars stories, but the names have been changed. Tricky Ali. Hanna's reasoning for keeping the journal to herself: some of the stories are super private. Well, duh!

Oh. OH. I get it. Ali must've written about something Hanna doesn't want the other Liars to read about. WHAT COULD IT BE?!

Emily's journal strategy: Go through all of the stories and pick out the ones that they know are about themselves. They think there's a chance that the leftover stories could be about Board Shorts/help them figure out who Ali is scared of. Nice plan, Fields!

That night, Ali visits Emily in her bedroom. She says, "You have no idea what I've been through. I've saved your life. Twice." Emily says, "You destroyed me. I thought you were dead." They have a weirdly tense conversation. Emily wakes up from the dream.

The next day, Spencer goes to Toby's place wearing suspenders. Suspencerders. Toby's supposed to meet with Spencer's dad about the Radley stuff, but Spencer's dad had to cancel. Spencer is like, "Meh, probably for the best. Let's make out." They make out.

Later, Spencer's dad tells Spencer he canceled on Toby because he obtained more info regarding Toby's mom's death. He called Radley and they told him that was an accident. He was like, "Oh, okay. Thanks!" Allegedly, another patient was on the roof with her and Radley didn't want the other patient to get in trouble. So they classified it as a suicide. But it wasn't murder, it wasn't suicide. Just an accident. Her dad is like, "Looks like we can't bring Radley down after all." Spencer is like, "Uh… fine?"

At school, the Liars read Ali's journal and try to interpret her poetry. EZRA SPIES LIKE THE CREEP THAT HE IS. The Liars realize one of the poems is about a real hotel called the Busy Bee Inn. Naturally, they decide to visit the Busy Bee Inn that night. Those Liars waste no time. G'bless 'em.

That night, Ezra goes to Hanna's house and is like, "Hey, Ashley Marin. Blah blah blah, school stuff." Ashley's like, "Hanna isn't here, but I'm going to take a comically long work phone call while you hang out in the foyer." Ezra doesn't stay in the foyer. He takes the opportunity to snoop around Hanna's bedroom. He hops on her laptop. UH OH.

While the Liars are on the road trip, the car dies. Because of course it does. They panic. Hanna texts Travis (he's baaaaack!) to pick them up, but he says it'll be two hours before he gets there. That wouldn't be a problem, except for the IMPENDING RAINSTORM. OF COURSE THERE IS AN IMPENDING RAINSTORM. Aria realizes they're walking distance from Ezra's cabin. OF COURSE THEY ARE. She tells the Liars that it's her uncle's cabin.

During the road trip, Spencer notices that a story went missing from the journal. A story about a "cradle robber." Spencer knows Hanna took it. Hanna comes clean and says the story isn't about Ali. The story is about her. Whose cradle did she rob? MIKE MONTGOMERY'S.

The Liars are like, "You aren't actually bugging over this Mike Montgomery thing, are you? Talk to us about Caleb, please." She tells them that he met someone else and left her. She leaves it at that.

Emily and Hanna wander around outside to try to get cell service (because of course Ezra's nightmare cabin has terrible cell reception). Aria and Spencer go in the cabin laundry room for blankets. They get locked in the laundry room. And that's when they realize "A" is in the cabin. Aria asks, "What is he doing? Did he follow us here?" YOU DON'T KNOW THE HALF OF IT, ARIA. Emily and Hanna hear them scream. They break a window to get back in the house and let Aria and Spencer out of the laundry room. "A" is gone. And so is the journal. "A" has the journal. This is just great.

There's a knock at the cabin door. It's... Travis. Travis tows them home. Travis and Hanna go to Hanna's house. Hanna is like, "Let me pay you for the tow," and Travis is like, "Nah, we're friends. Let me be a nice guy." Hanna cries. LOOK AT WHAT YOU'VE DONE, CALEB.

Ezra calls Aria. He's wearing his "A" gear. She's like, "Did you get your work done?" and he's like, "Yep! Love you!" AND SHE SAYS SHE LOVES HIM TOO. AND I THREW MY TELEVISION SET OUT THE WINDOW.