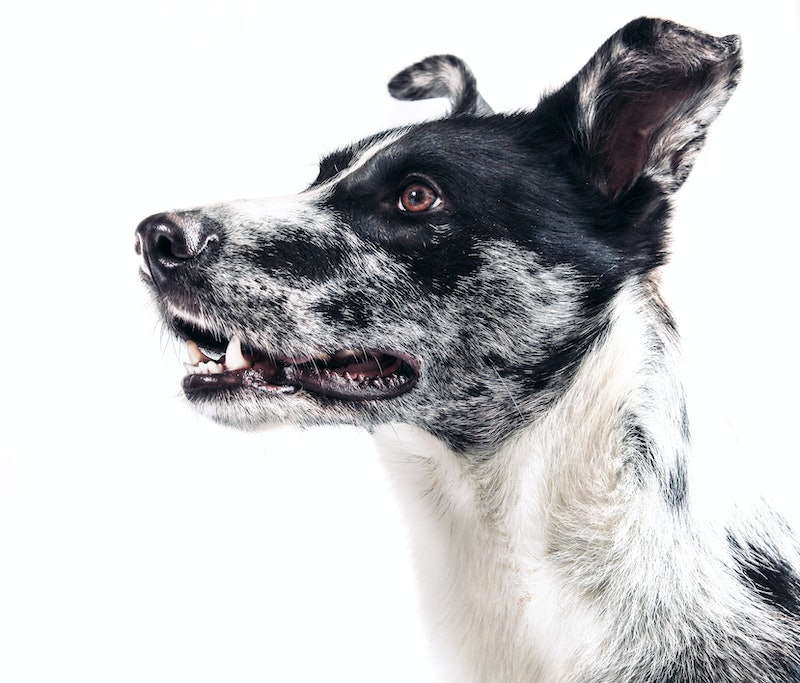 Sometimes I’m convinced that my dog and I speak the same language. She just seems to get what’s is going on, and knows exactly how to respond to the situation, whether that means quietly snuggling up to me, running around and making noise, or putting herself to bed — like a little, uncommonly friendly human wearing a fluffy bear costume. But then other days, she acts like a huge weirdo, and I find myself staring at her and wondering, “Are you secretly an alien from another galaxy who can somehow perceive a parallel dimension that’s happening on top of our own? Because that’s the only reason I can think of for why you are growling at nothing at three in the morning.”

Dogs can thank their ancestors for a lot of their weirder behaviors, from circling their beds over and over to rolling in stinky things. Dogs, descended from gray wolves, were the first animals domesticated by humans, a process which began at least 15 thousand years ago. The instinctive behaviors that dogs built up over thousands of years to help them survive in the wilderness have lingered in many of our furry companions today, even in pups like mine, whose closest encounter with the “wilderness” is a city park that hasn’t been raked recently. Read on to learn how some of your dog’s weirdest behaviors are hard-wired into his or her brain. It may not make your pooch’s habit of eating rabbit poop any more tolerable, but it might help it make more sense.

Your dog’s habit of walking in circles before settling in for a nap comes from its distant history of sleeping in the untamed outdoors. Thousands of years ago, dogs would circle before sleeping in order to flatten any brush or leaves and make comfy nests for themselves. Leslie Irvine, author of If You Tame Me: Understanding Our Connection With Animals, told Live Science that the behavior could also be a safety measure, saying, “In the wild, the circling would flatten grasses or snow and would drive out any snakes or large insects.” She adds that circling could also be a dog’s way of marking his or her territory.

Again with the circling — do dogs just like the feeling of wind in their faces as they spin around and around? There are a few theories as to why dogs often circle before pooping. As this video from Discovery News suggests, it could be that they are trying to tamp down brush — just like when they sleep — but in this case, it’s so that they don’t get feces on themselves. Flattening the ground could also allow the scents from their bodily fluids to have a farther reach, letting other animals know whose territory it is.

A recent study sheds light on this behavior, and reveals something about your dog you may not have noticed before: Dogs poop along the Earth’s north/south axis. That’s right, your dog’s a walking compass! (Well, sort of.) A two-year study published by German and Czech scholars in 2014 found that dogs prefer to defecate while positioned in alignment with the magnetic north/south axis of the planet — and so all that circling beforehand may simply be them looking for exactly the right spot. Just why dogs want to align their bathroom time with the north and south is still a mystery. In the study, researchers wrote, “It is still enigmatic why the dogs do align at all, whether they do it 'consciously' (i.e., whether the magnetic field is sensorial[ly] perceived) … or whether its reception is controlled on the vegetative level (they 'feel better/more comfortable or worse/less comfortable' in a certain direction).”

3. Rolling in dead and/or stinky things.

With my dog, I’ve learned that, if she’s rolling in it, it’s either dead or it's poop (or maybe even a dead thing’s poop). In an article for Psychology Today, psychologist and dog behavior expert Stanley Coren highlights a number of different theories as to why dogs love to roll in smelly things. The theory he finds most compelling is that dogs roll in stinky stuff to disguise their own scents from prey. An antelope, for example, will run if it smells a predator nearby, but if the predator is covered in the scent of antelope feces or rotting things, the antelope won’t recognize it’s in danger and will stay put. Of course, most dogs these days hardly qualify as predators (unless socks in the laundry room count as prey), but the behavior remains. Coren also makes an unscientific guess about dogs’ love for malodorous things, and suggests that dogs simply like being stinky:

For human beings our dominant sense is vision while for dogs it is their sense of smell. Dogs, like people, enjoy sensory stimulation and may well be prone to seeking such stimulation to an excessive degree. Therefore, I believe that the real reason that canines roll in obnoxious smelling organic manner is simply an expression of the same misbegotten sense of aesthetics that causes human beings to wear overly loud and colorful Hawaiian shirts.

A dog’s tail is one of its chief tools for communication. We often tend to thing that “wag” equals “happy,” but a wagging tale is actually a complex language of its own: Wagging to the right means a dog is happy, and to the left indicates fear. If dog’s tail is held high, and it wags back and forth, it’s a sign of happiness, but when the tail is wagging while tucked low between the legs, it’s a signal that the dog is frightened or worried.

From an evolutionary perspective, tails exist for balance, but over time dogs began to use their tails to communicate. Scientists still aren’t sure how much of tail wagging is instinctive, and how much is learned, or whether tail wagging is involuntary or purposeful. Veterinarians talking to Animal Planet think that it’s probably a mix of both. Veterinarian Lisa Radosta, owner of Florida Veterinary Behavior Service, explained,

We can't talk to dogs so we don't know if they think about the tail wag and then do it, or if it just occurs due to the neurochemical effects of a certain state of mind. However, you can watch dogs in a dog park and know that the dogs have an intent when they hold their tail a certain way or wag it a certain way.

I’ve just realized that many of dogs’ weird behaviors involve pooping, rolling in poop, or eating poop. Remind me why we keep these disgusting creatures around again?

Oh, yes, thanks. Anyway, some dogs have the extremely unfortunate habit of eating other animals' feces. This behavior is called “coprophagia,” and it’s super gross, especially when your dog tries to lick your face directly afterward. We don’t know why, exactly, dogs do this (or why some dogs do it and others don’t), but Steve Duno discusses a few theories in Modern Dog: When a female dog has puppies, she’ll sometimes eat their feces. This is a hold over from the days when dogs were having litters in the wild; eating the feces was a way of removing the puppies’ scent and hiding them from predators. Other dogs may eat poop due to vitamin deficiencies in their diets or simple hunger.

More like this
Picky Eater? Sensitive Stomach? This Vet Nutritionist-Designed Dog Food Has A Plan For That
By Maria Cassano
23 Super Sweet Things To Write In A Valentine's Day Card
By Karen Belz and Lexi Inks
Home Owners Say They Wish They'd Gotten These Weird But Genius Things Sooner
By Maria Sabella
7 Dos & Don'ts For The February 2023 Full Snow Moon
By Brittany Beringer
Get Even More From Bustle — Sign Up For The Newsletter
From hair trends to relationship advice, our daily newsletter has everything you need to sound like a person who’s on TikTok, even if you aren’t.