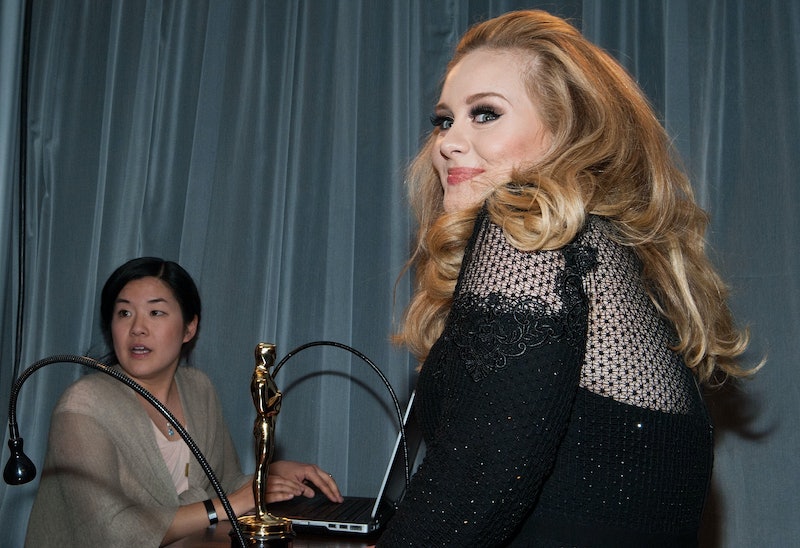 I know we've all had 25 on repeat for weeks now, but hold on for a moment. Remember that legendary mash-up of Adele's "Hello" with Lionel Richie's old-school classic also called "Hello?" Well, apparently Lionel Richie loved it, and has claimed that the two will be working together in the near future. Wait, did I hear that right? Adele and Lionel Richie may duet together? I'm sorry, but have we entered Crazy Town?

In an interview with E! News, Richie said, "We are going to be doing something together — that's already almost in the works... I can almost say that we are talking, but right now she has a mission." If there weren't so many uses of the word "almost" in that sentence, I might believe that the Internet had achieved its ultimate goal: one of its most famous mash-ups had finally become a real-life collaboration.

Of course, this is not to say that a duet between the two won't happen. In an interview with BBC Radio 1, Adele said, “We’ve definitely got to do something, me and Lionel.” Which certainly makes it sound as though Adele is open to the idea of working with Richie. Further evidence comes from the fact that she's also an avid fan of her own parodies. Following a stint on Saturday Night Live, Adele shared a photo of herself laughing at Matthew McConaughey's impression of her "Hello" video.

One of the main reasons I'm skeptical as to whether this collaboration is really happening is the way Richie joked about appearing on tour with Adele. Speaking to E! News he said, "If I jump on her stage, she'd probably throw me out. Can you imagine 'Lionel Richie Jumps or Crawls Up on Adele's Stage?'" It's nice to know that Richie has a sense of humor about the whole thing, especially seeing as, upon hearing Adele's "Hello," several of his friends called him up and told him to sue her. Aside from the fact that the only similarities the songs share are their titles and the fact that they're both super miserable, the whole thing seems like a comedic anecdote told by Richie.

Then again, stranger things have happened, that's for sure. Maybe the Internet really did start something with that now legendary mash-up of Richie and Adele? We'll have to wait and see.

More like this
Twitter Has *A Lot* To Say About Justin Timberlake’s Beat Ya Feet Dance
By Sam Ramsden
On TikTok, Miles Teller Is The Latest It Boy
By Meguire Hennes
Kanye Joked About His Divorce To Kim K In A Surprise Speech At The BET Awards
By Alyssa Lapid
What Is Ariana Grande's Net Worth? When It Comes To Money, She Has No “Problem”
By Hugh McIntyre
Get Even More From Bustle — Sign Up For The Newsletter