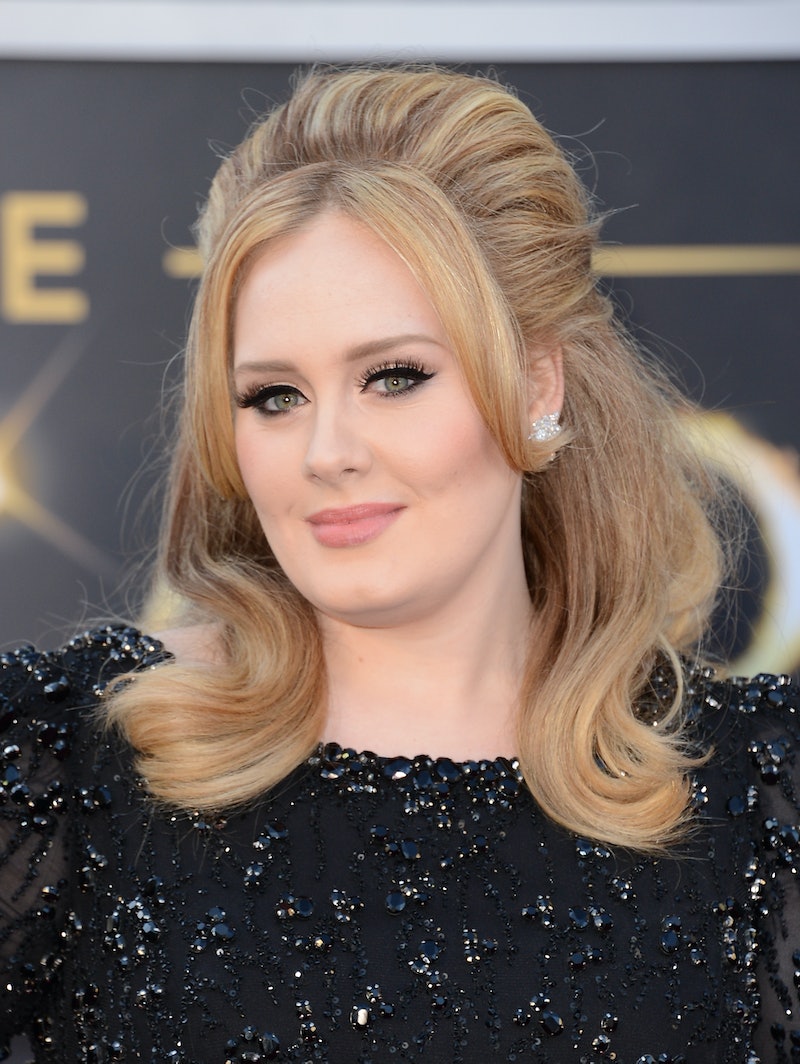 Move over Miley Cyrus, Taylor Swift, Nicki Minaj, and Katy Perry — the true Queen has returned. The music video for Adele's latest single "Hello" from her new album 25 is officially here, and it is mind-numbingly good. It's like, girl — work that contouring, that wind, and fur coat, you are a superstar. The whole album drops Nov. 20, but "Hello" gives us a sliver of what to expect — and it seems like what to expect is that there will be even more grammy gold in the songbird's future.

"Hello" is the first music video to be shot on IMAX camera (way to make history, Adele!). Even better, it was directed by Xavier Dolan, who won the Grand Jury Prize at the Cannes Film Festival for his film Mommy in 2014. It's totally edgy and shot in beautiful black and white — clearly, Adele is really pulling out all of the stops and going pure Hollywood for this video. It makes sense that she's super cinematic now: she's got an Oscar, after all.

In fact, it's the most powerful pop power-ballad about a greeting since Lionel Ritchie's own song about a certain greeting, "Hello." See where I am going here? If not, I'm specifically proposing Adele and Lionel Ritchie should combine forces to create the ultimate hello-themed top 40 hit. The radio would melt with the power of these two superstars.

And apparently, according to The Telegraph, Adele said she'd love to work with Lionel Ritchie on something — so this Lionel Ritchie/Adele mashup could totally happen!

Here is how I envision this collaboration.

What's That In The Distance?

It's a car driving up the winding road to Adele's house. Somebody is about to have a visitor!

Surprise! Adele's house guest is Lionel Ritchie: A man with the voice of an angel and five-star Jheri curl. Things are about to get real interesting.

A Hostess With The Mostest

Like any good host, Adele makes Lionel Ritchie a cup of tea, because they are both singers and need to take care of their vocal chords.

I feel a storm a brewing — Adele does not seem happy to see Mr. Ritchie

Smize Your Way Into Her Heart

Lionel seems to know he is in the wrong. Look at those puppy dog eyes. He wants Adele back, I can tell.

Adele Is Having None Of That

Adele is having none of your bullsh*t, Lionel Ritchie.

His lips say, "It's me, baby, please forgive me," but his mustache says,"Don't trust me babe, I'm a dangerous man."

Adele and her fuzzy coat are having none of this — conversation over.

Ritchie tries calling Adele and he croons to her over the phone.

He Made Her Cry!

Oh, she mad. Nothing says "I hate you," more than leaving a person hanging on the telephone and leaving the ACTUAL TELEPHONE hanging.

He'll Wait Forever For Her To Return

I don't think Lionel Ritchie has realized she's not coming back. Adele is ice-cold, she's never coming back.

Lionel is bringing out the big guns — he wrote her a song!

And The Sing-Off Commences

Adele will sing the song of a thousand broken hearts to show how okay she is with being single.

A Change of Heart?

Adele looks like she is maybe having a change of heart? Will she take Lionel back?

Let loose, Adele. The whole world has been waiting for this moment.

Girl knows how to work that wind machine.

She's Totally Fine On Her Own

Adele can stand on her own two feet — in the middle of a forest. She's all good.

She Really Means It

When Adele really means it, she talks with her voice and her hands (insert patented Adele hand-grab).

Sorry Lionel, Adele is Queen and is not in need of any king.

Adele shoots the camera one last size to let Lionel know what he'll be missing.

Hello, Adele. It's so good to hear new music from you.