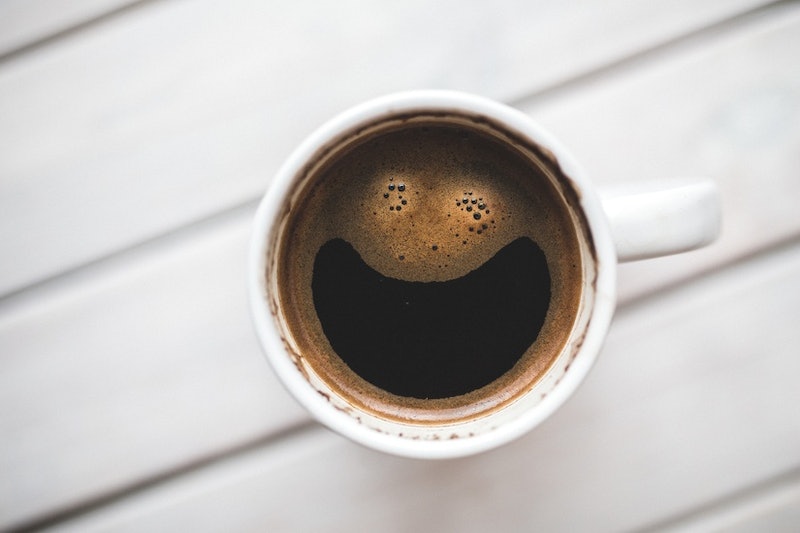 Ah, coffee. You are a beloved drink responsible for waking us up and helping us focus when we've gotten less than an optimal amount of sleep. Coffee — it truly does make the world go 'round. But it also has some pretty strange side effects, which can leave you wondering if you've had too much caffeine.

A few cups of coffee a day is fine, but sometimes it's possible to have too much of a good thing. You really shouldn't have more than 400 milligrams of caffeine a day, according to the Mayo Clinic, which equals out to about four cups of brewed coffee, ten cans of cola, or two energy shot drinks. Of course, this needs to be adjusted based on how well you handle caffeine. So if you notice that it really causes you to bug out, then bring your amount down to one or two cups a day (or — gasp — none at all).

If you're a big coffee drinker, then your caffeine intake really is something to think about. Americans consume a mind-boggling 400 million cups of coffee a day, according to the Huffington Post. That means there are probably a lot of us out there who are consuming way more caffeine than we should be. If you love coffee and are wondering if you may be one of those jittery folks who is overdoing it, then read the signs below to see if it may be time to set down your mug.

1. You Can't Sleep At Night

Caffeine is a stimulant that works by blocking sleep-inducing chemicals, and by increasing adrenaline production, according to the National Sleep Foundation. That's all well and good when you need to wake up in the morning, but not so good when you're trying to get to sleep at night. Something to consider is the half life of caffeine, which is five to six hours. This means it takes five to six hours to get half of the caffeine out of your bloodstream. So if you're drinking a cup in the morning, then you're going to be just fine by bedtime. But if you're slogging down shot after shot of espresso all day long, then expect to be awake all night, and consider limiting your coffee to the AM only.

2. You're Jittery And Can't Sit Still

Pouring caffeine into your face seems like a good idea when you need to run to work in the morning or stay up all night studying. But once the studying is over and you no longer need to be awake, you'll often find that you're left with awful jitters. That's because caffeine can stimulate hormones, such as adrenaline, which causes a fight or flight response in the body, according to Rachel Nall for LIVESTRONG. Too many cups of coffee can also widen your arteries and cause blood to rush deliver oxygen to your brain and tissues, creating a feeling of alertness that can be perceived as jitteriness, writes Nall. The jitters are literally your body working too quickly, and that can be pretty unpleasant, especially when you want to relax.

3. Your Anxiety Or Depression Is Getting Worse

Caffeine is a stimulant, so too much of it may increase your stress levels and send your anxiety spiraling out of control (especially if you're already prone to nervousness). The surprising thing, though, is that caffeine can also worsen depression. There have been many studies on the matter, and one possible explanation may be that caffeine worsens blood sugar control and messes with your brain, according to Michael T. Murray for MindBodyGreen.com.

4. Your Eye Is Twitching Something Awful

If you occasionally get that annoying eyelid twitch, it may be caffeine that's to blame. No one is sure how it happens exactly, but research has shown that caffeine prompts the release of excitatory neurotransmitters like serotonin and noradrenaline, which increases reactivity in the muscles and nerves, according to an article by Markham Heid for TIME. So the next time that your eye is trying to tap dance its way off your face, take it as a sign that you've had a bit too much caffeine.

5. You're Having Gastrointestinal Problems

A lot of foods and drinks can fall into the "too much of a good thing" category. But caffeine, especially in high doses, can really do a number on your guts. In fact, coffee has been found to contain several components that can cause heartburn and stomach aches, according to Bill Hendricks for WebMD. This may explain some of your more mysterious stomach symptoms, and may be a sign you should cut back.

6. You're Being Super Irritable

Caffeine withdrawal can cause you to kind of lose your sh*t, which isn't very pleasant for anyone. But don't think you're exempt from this side effect just because you haven't quit your coffee cold turkey. Crankiness can set in only a few hours after your last cup, according to Dani Veracity for Natural News, and can even affect people who only drink one or two cups a day. So if you're being mean and short with everyone, it may be your coffee habit that's to blame.

Coffee is an awesome — and sometimes utterly necessary — beverage that millions of people drink every day. There's no reason to be scared of caffeine, but do consume it in moderation, lest you experience some of it's more unpleasant side effects.