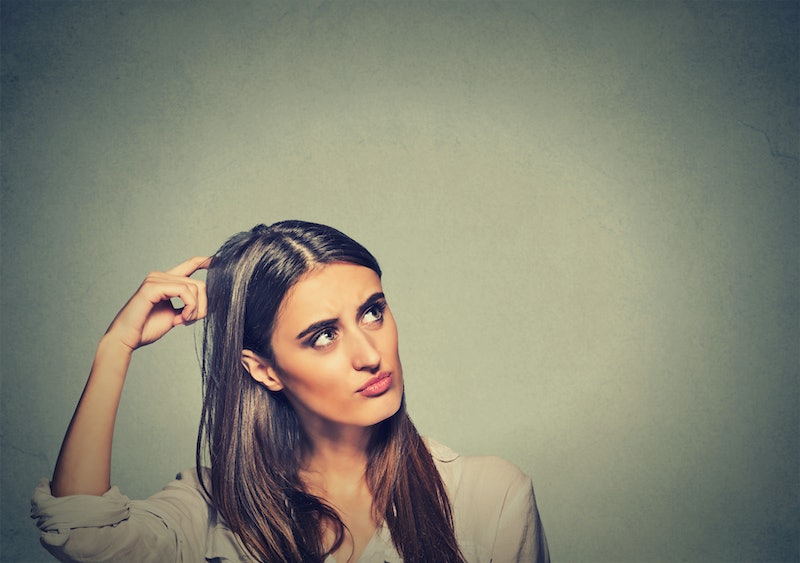 You know that feeling at the end of the month? The one when you're logging into your checking account to make sure there's enough for rent and simultaneously thinking, ugh, I should really give up lattes or quit my gym? It's a specific kind of anxiety, and one that many people have trouble talking about.

In theory, your 20s are a great time to lay down a solid financial foundation, seeing as you're largely untethered by major financial responsibilities that come a little later down the line — like mortgages and childcare. But between entry-level salaries and being on your own for the first time, it is hard to gain strong financial footing in the years following college, especially for millennials who graduated at one of the worst times in history for finding gainful employment. The "best time of your life" ends fast and hard and suddenly you're paying up. So why are we always so afraid to talk openly about money matters?

It's time to talk openly about money because, to some varying degree, we're all in this together. If there's one silver lining, it's that being young means it's not too late to break debilitating cycles and learn new, better habits. Now is the time to start.

In partnership with Capital One, which recently conducted a nationwide survey of millennial money habits, we're taking a look at some of the most common money problems twenty-somethings face today.

Might as well start with the problem that seemingly begets all other problems. By today's figures, 71 percent of bachelor's degree recipients graduate with at least one student loan. (But let's face it: it's often multiple loans.)

Unsurprisingly, Capital One's survey found that over a quarter of millennials consider paying off their student debt to be a greater feeling of accomplishment than anything else. After all, those monthly payments sure do stretch the rest of our money thin, making it harder to tackle other financial goals, like retirement savings or home ownership.

Many millennials relocate to (or remain in) major metro areas post-graduation because that's where the jobs are. When making a lower pay grade while living in a pricey city like New York or Washington D.C., it's not uncommon to spend about half of your monthly take-home income on rent alone. Not good! Conventional wisdom recommends spending no more than thirty percent of income on rent.

Equally as important to millennials as paying off student debt is establishing a solid emergency fund — ideally, six months of living expenses. When starting out on an entry-level salary, and taking into account aforementioned monthly debt and rent payments, throwing money into your savings account can feel impossible. Especially if you also want to, you know, enjoy life every once in awhile by way of a new outfit or a weekend trip.

But the hard and undeniable truth is, the sooner you start building that nest egg, the better off you are (thanks, compounding interest!). The same goes for retirement saving. It can be hard to take seriously when still four decades away from retirement age, but all that extra time makes for a huge advantage.

Financial factors come into play in all stages of a relationship, from casually dating to fully committed. Early on, there's that pressure for everything to be fun and perfect, which often leads to accumulating costs of dinners, drinks, brunches, and movie dates. Later in a relationship, major expenses (joint travel or moving in together, for instance) inevitably expose partners' individual approaches to finance.

This, of course, has a huge impact on relationships: one in 10 participants in Capital One's survey said that financial recklessness is a "deal-breaker." Quite simply, they're willing to get up and walk away from someone who lack money management skills. But hey, since financial issues are the number-one source of strife among married couples, millennials are probably wise to be cautious. Then, there's when other people's love lives affect your finances, which brings us to...

There comes a point in your twenties when suddenly, it seems as if everyone you know is getting married. Great! Weddings are so fun! This is true, but being a wedding guest can actually get really, really expensive. First and foremost, there's the gift (make that multiple gifts if you're attending a shower beforehand). If the wedding requires traveling, there's also the cost of the flight and a hotel. If you're invited to be in a friend's wedding party, expect even more expenses like a dress and bachelorette weekend. Oh and let's not forget, all these weddings will most likely land between the months of June and October. Consider your summer budget spoken for.

Given that we're coming off the Great Recession, many millennials are happy enough just to get a job offer, any job offer, that they don't even think to ask for more money. Over 60 percent of millennials fail to negotiate their first salary and it's a real problem. Even a modest pay bump can lead to a significant increase in lifetime earnings over time, especially given that initial salary becomes the baseline for all future raises.

7. Keeping Up With Your Social Life

No two ways about it: after college, it simply becomes more difficult to see your friends. No more meeting up on a whim for lunch in the dining hall or running into each other in the library between classes. Suddenly, everyone has full-time jobs and is off living in their own apartments. Even if you live in the same city as your pals, hanging out often means "meeting for drinks" or "grabbing dinner" which all amount to a cost greater than the swipe of a meal card (although, not really; refer to #1).

More like this
15 Years Of The iPhone, In Pictures
By Emma Carey
YouTuber Runs Into Margaret Sanger’s Grandson While Filming
By Alexis Morillo
Why You're Seeing Green Bandanas At Abortion Rights Protests
By Lexi Inks
5 Ways To Stand In Solidarity With Women In America From The UK
By Sophie McEvoy
Get Even More From Bustle — Sign Up For The Newsletter