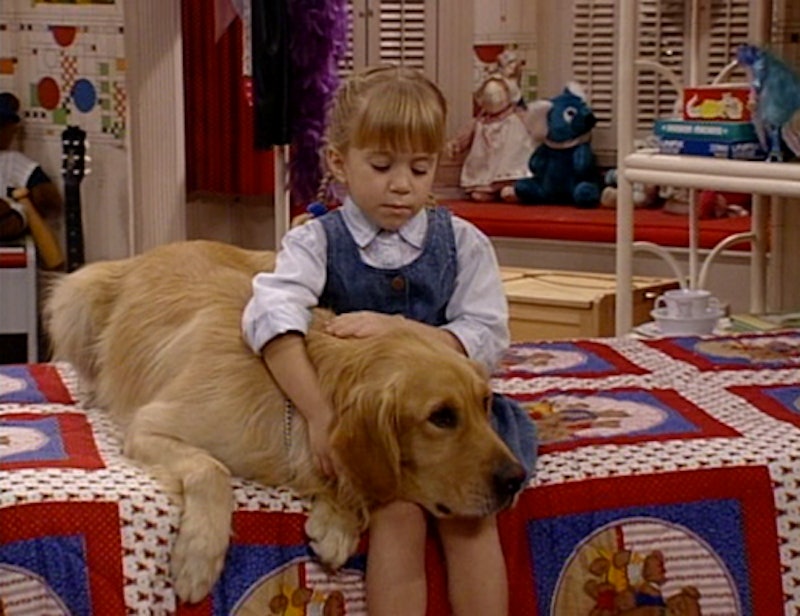 Growing up in '90s, my holiday wish lists were always filled with a wide array of dream pets that I knew I'd never get. Yet without fail, every year I'd add a few animals to the list, just in case the gift Gods were feeling extra generous. But the reality of the matter was that we couldn't get a cat because my mom was allergic, so goodbye dreams of Salem from Sabrina the Teenage Witch. And we couldn't get a bunny because they pooped too much, so goodbye dreams of The Velveteen Rabbit. Reptiles were too scary so no Lizzy the lizard from Mrs. Frizzle's Magic School Bus. And we definitely couldn't get lion cub because it was illegal, so ta-ta dreams of Simba and Nala.

I felt very pigeon-holed with my holiday gift lists and my parent's guidelines. And it certainly didn't help that '90s TV programming was just filled with amazing dream pets. There was one loophole, however. My parents were dog people. They had many dogs in the past. We had a big yard. It was a possibility. So finally, by the mid '90s, I had figured out how to properly campaign for a pet via holiday wish lists; I'd just ask for a dog, relentlessly, every year, until they gave in. The only problem was, there were so many dream dogs to chose from. If you were a kid in the '90s with big dreams of being a pet owner, you probably had a few of these fictional characters on your list, too:

Comet, The Dog From Full House

Comet was so sweet and lovable. He was incredibly animated and well-trained. And he had such a good temperament, remaining calm and unfazed by the many children constantly grabbing at him in that Tanner household.

Porkchop, The Dog From Doug

While Porkchop couldn't talk, he and Doug did a lot of communicating. He mostly spent his time walking around like a baller on his hind legs but had a strong sense of doggy self.

Gidget could talk, which was epically important in dream TV dog characters. While maybe he wasn't the cutest dog on TV, his intelligence and confidence certainly made him stand out. Who wouldn't want a dog you could have a conversation and share a meal with?

Wishbone, The Dog From Wishbone

Wishbone was incredibly spirited. He was an adventure dog, a storyteller and a mentor, all in one. He wasn't the kind of dog that would lay at your feet all day.

Happy, The Dog From 7th Heaven

Happy was literally the happiest dog on TV. She was this scrappy looking mutt that did nothing but please her owners and cheer them up when they needed it. She was more like the family's silent therapist than their pet.

Beethoven, The Dog From Beethoven

Beethoven was a big, messy, untrainable beast. He was also the cutest, most cuddly and energetic nightmare of a dog. He would be the kind of pet who ate your birthday cake and pooped on your homework, but you'd love him madly anyway.

Clifford was like too big to function. It was easy to appreciate his gentle nature, he was an unique gentle giant and maybe the closest thing a kid could have to owning a pet dinosaur. What lazy kid doesn't want a dog that can walk itself?

Spunky was not like other TV dogs. He was unintelligent and unimpressive in every way. He drooled, his eyes crossed, and his legs failed him, often. And yet, he was so lovable. He needed Rocko more than Rocko needed him, which pulled a few heartstrings for viewers. Who doesn't want a dog that makes you feel special?

Spike, The Dog From Rugrats

While Stu and Didi were busy being constantly frazzled by their adult life and parenthood, Spike stood in as a parental figure for Tommy and Dill Pickles. While he didn't have any dazzling skills or personality quirks, his protectiveness over the kids was pretty respectable.