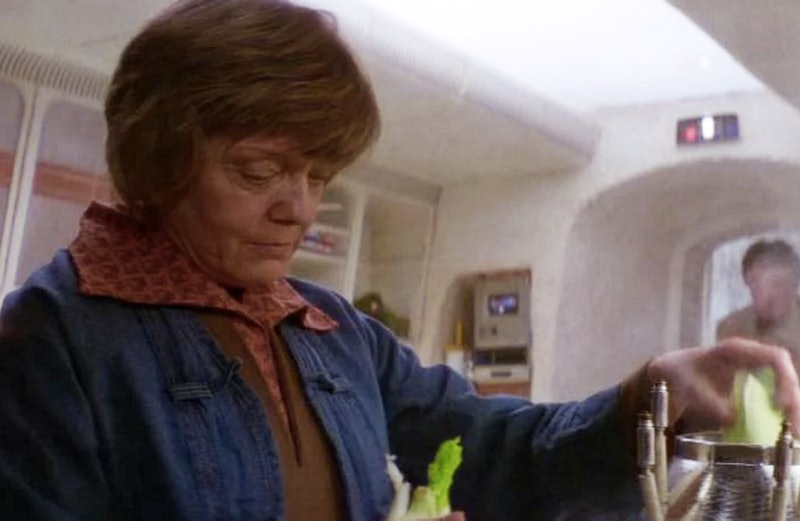 The force is awakening on December 18, and, with the constant buzz surrounding the new Star Wars in the galaxy far, far away, sometimes looking back can be a little uncomfortable. Like this supercut from New York Magazine of every line in the original Star Wars trilogy spoken by a woman — that isn’t princess Leia. There are just three; one for every movie in the trilogy, I guess? Luckily, new director J. J. Abrams took note even before the NYM video, and Episode VII — The Force Awakens has a new female face front and center: 23-year old Daisy Ridley, who will be playing Rey. Incidentally, this is not only her first Star Wars role, but her first role ever.

Even though she doesn’t have a lightsaber like Finn in the new teaser trailers, Rey is definitely a badass with that staff weapon and skilled when it comes to combat. Maybe this movie should be called Star Wars: The Female Force Awakens, And It's About Time. Like Seriously. The supercut is only about a minute long: without Princess Leia, one of the greatest female heroes of any sci-fi trilogy, the only women who literally speak in A New Hope, The Empire Strikes Back and Return Of The Jedi are “Aunt Beru, Mon Mothma, and some unnamed Rebel functionary at the Hoth base.” That’s the problem with science-fiction: even though it’s supposed to be removed from time, it still reflects the times in which gaining women more visibility and a broader variety of roles in pop culture is an ongoing battle.

Abrams made effort to remedy this problem, thankfully. Star Wars: The Force Awakens already has three women in powerful roles: along with Ridley, there’s Lupita Nyong’o as the wise space pirate Maz Kanata, Gwendoline Christie (of Game Of Thrones fame) playing the warrior Captain Phasma, and Leia herself: Carrie Fisher is returning, this time as the highly ranked General Organa. In an interview on Good Morning America promoting the film, Abrams stressed the importance of enforcing the female presence: “Star Wars was always a boys’ thing, and a movie that dads could take their sons to. And although that is still very much the case, I was really hoping this could be a movie that mothers could take their daughters to as well.”

And Lucasfilm president Kathleen Kennedy had quite the hand in this, too, to say the least. Kennedy, one of the most powerful women in Hollywood right now, produced The Force Awakens, and in an address at the at the Fortune Most Powerful Women Summit in Washington, Kennedy told the Guardian “that Rey would be “extremely significant” but refused to reveal more details, insisting: “I don’t want to spoil the story.”

Not only are these new Star Wars women going to be speaking, they’re going to be taking those intergalactic baddies down. Daisy Ridley went through extensive training with the swordfighting choreographer from Game Of Thrones, learning how to wield that staff weapon to take down the the Dark Side. She also trained in the bojotsu fighting style, and as producer Kathleen Kennedy notes, Ridley is practically a master. “Daisy’s gotten to be so good at bojotsu that even grown men on the set fear it,” Kennedy said in an interview with Kotaku earlier this summer.

It looks like The Force Awakens will finally fix the women problem that the NYM video highlights. And, as for Leia aka General Organa aka Carrie Fisher, she gave some great advice to Ridley, the new female hero, in a conversation in Interview: "You keep fighting against that slave outfit," she said, while the two were discussing the sexism in the original films and the sexism it generated. "OK, I'll fight," Ridley said. I can't wait to see her wield her power on-screen.