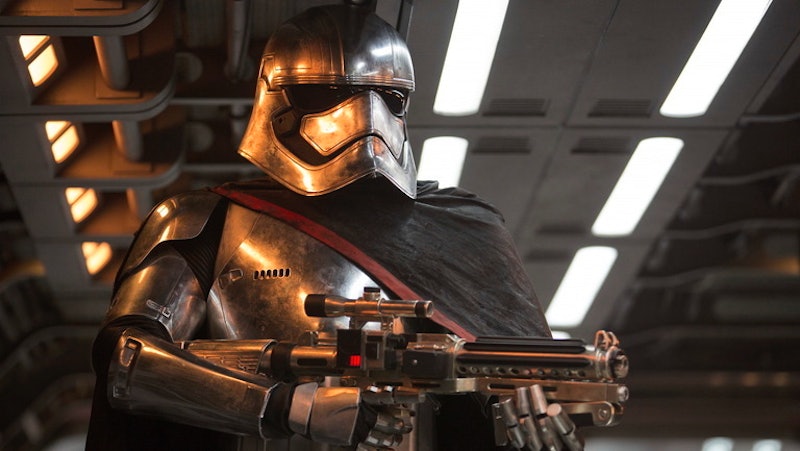 The Star Wars franchise has done a lot of things well over the years to secure its enormous fanbase. The films have revolutionized special effects, created memorable characters, and birthed the modern blockbuster. Basically, everyone knows that Star Wars is awesome. But the series hasn't done everything well, especially when it comes to the treatment of its female characters. Sure, Princess Leia is a strong presence and a great role model in the original trilogy, but she's also virtually the only female character in those three movies. But now, after six movies with very little for its women to do, things are finally looking brighter in the upcoming Star Wars Episode VII: The Force Awakens . Daisy Ridley is portraying Rey in the new film, and she is expected to be the new trilogy's main protagonist. The new Luke Skywalker, if you will (little known fact: Luke was originally going to be a girl). Leia is also back for The Force Awakens, and in the ensuing 30 years since the original trilogy she's been promoted from princess to general. But the most impressive female character of all in The Force Awakens might just be Captain Phasma.

Game of Thrones star Gwendoline Christie is playing Captain Phasma in the new film, and all signs indicate that she's going to knock it out of the park. The chrome Stormtrooper looks like she's going to be a total badass, and will likely inspire the same kind of cult-like fan devotion that Boba Fett earned in the original trilogy. Most details about Phasma are being kept under wraps until the movie premieres, but what has been revealed makes me think that this character might just end up stealing the show. So here's everything you need to know about Captain Phasma.

Star Wars has had female antagonists in some of the expanded universe material, but never in any of the movies. That's going to change with Phasma, who is greatly expanding the Star Wars universe just by being a non-male villain alone.

The Part Was Made For Christie

Although Phasma's chrome Stormtrooper look was originally an early design for Adam Driver's Kylo Ren, director J.J. Abrams instead decided it should be a new character, it should be female, and she should be played by Christie. Thankfully, everything worked out.

She Commands the Stormtroopers

According to Star Wars' website, Phasma is in charge of the First Order's Stormtroopers. So not only does she look like a boss, she is a boss.

Her Uniform Is Proudly Gender-Neutral

When a fan on Facebook pointed out that Phasma's armor didn't look female enough (i.e. no metal boobs), the official Star Wars account responded with: "It's armor. On a woman. It doesn't have to look feminine." Bam.

Not much is known about what Phasma does in the movie, but based on the few images I've seen of her, she doesn't seem very nice. I mean, anyone marching through a burning, destroyed village looking to shoot more people probably isn't all that pleasant to be around.

It's speculated at this point that fans might not see Christie's face at all in the movie. She's talked a lot about what a different acting experience it was for her having to act inside the armor and using her body language to convey aspects of the character, and she could be hinting at a totally obscured performance.

That's pretty much all that's been revealed about Captain Phasma, so like I said, there's not much. But the combination of Gwendoline Christie in the role as well as the character's awesome appearance might just make her the most anticipated character in all of The Force Awakens. And for a female character in a Star Wars movie, that's a big deal.