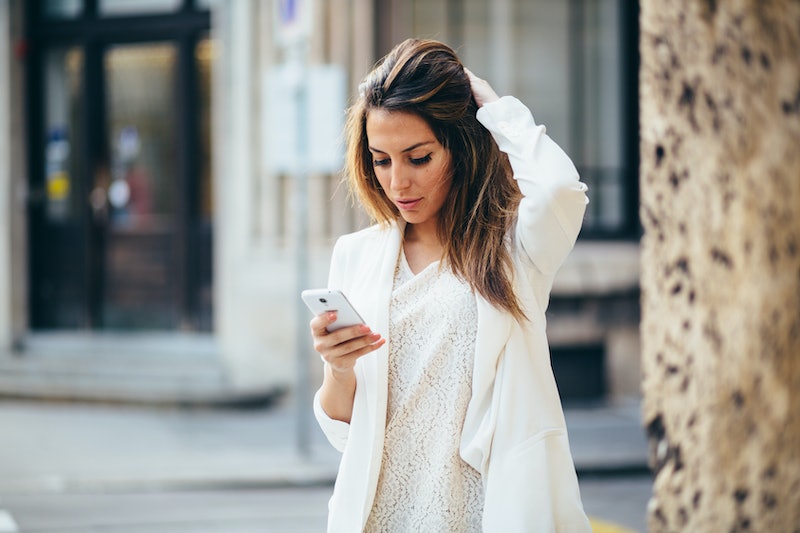 When you're going through a breakup, one troubling question remains: Should you unfriend your ex? Advances in technology have made so many tasks simpler and faster, but going through a breakup is one thing that just can't be made easier. Social media may seem like a godsend 99 percent of the time, but when you've been recently heartbroken, the simple act of checking your Facebook can feel like a knife through the heart.

There are dozens of social media outlets, and pretty much everyone is addicted to at least one of them. If I told you how many times I've tweeted or how many Snapchats I've sent, you'd probably be appalled, but hey, I'm a millennial and don't feel any shame in my social media addiction — because it's shared by almost everyone I know. Absentmindedly clicking on all my social media apps in rotation is something that occurs on a daily basis, but if I happen to come across a reminder of an ex, it's like having a bucket of ice water dumped on me, and it pretty much ruins my day.

So why don't I just unfriend them? Every relationship and breakup is different, with unique circumstances. Sometimes it's the end of a toxic cycle of on-again-off-again, sometimes it's totally unexpected and gut-wrenching, and sometimes it's a mutual, amicable split. For each of these cases, there are reasons you may be tempted to stay friends on social media: Maybe you want to stalk your ex and make sure they don't move on too quickly, or maybe you really are still friendly and don't mind seeing their updates. Whatever the case, it's your decision to make based on what you think will help you heal and move on.

Personally, I'm still friends with most people I've dated, because the thought of "burning a bridge" is one that makes me really uneasy. That's not the case for everyone, though, and sometimes it's really better just to put the past behind you, even on social media. Although it's never an easy decision to make, if you're having trouble moving on after a breakup, here are seven reasons to bite the virtual bullet and unfriend your ex.

It might be tempting to check up on your ex's social media activity post-breakup, but the reality is that this doesn't really help you feel better. A recent study from Ohio State University found that people stalk their exes online as a coping mechanism, but it actually hurts you more than it helps you. The research found that it triggered negative feelings, and often made it harder for the person to get over the breakup. So if you unfriend your ex, you're less likely to get sucked into a vicious cycle of cyber-stalking and recurring sadness.

2. You Won't Be Tempted To Reach Out

Another reason to unfriend? Cutting off contact can be beneficial for you. Trust me, I know from personal experience that it can be hard to go no-contact with an ex: It can feel like if you just send one more text explaining your side of things, he or she will come around and want you back. The reality is that this usually just makes you feel worse, because when your ex doesn't respond, you kick yourself and wish you'd never sent the message in the first place. Blocking his or her number is a first step, but remaining friends on social media will only tempt you to reach out to them in other ways.

Like I mentioned above, even seeing my ex's picture on Facebook is enough to send me spiraling (however briefly). Sometimes I will type the first letter of his name into the search bar looking for someone else, and he pops up first, and it's like a punch to the gut. In all honesty, it would be easier to simply remove him as a friend so there's no chance that instances like this crop up occasionally. "Out of sight, out of mind" is truer than you'd think — before you know it, you'll be able to log in without the fear of seeing a painful reminder of your past relationship.

An unfortunate side effect of being friends with an ex? The underlying dread you feel at the thought of one day logging in and seeing him or her posting pictures with a new bae, or worse still, changing his relationship status to "In A Relationship with [Not You]." Healing post-breakup shouldn't feel like a race to see who can move on the fastest; sometimes, we need time to be single and get in touch with our own needs and ambitions again. If you're constantly scouring your ex's page for signs that they are moving on, it might make you feel like you, too, have to go out of your way to find someone, even if you're not ready, which is totally unhealthy.

5. You Won't Have To Put On A Happy Face

Is there anything worse than being recently heartbroken and having to walk around acting like you didn't just spend 16 hours in a blanket fort with nothing but a gallon of ice cream and Adele's new album for company? Yes, there is something worse, and it's the feeling of having to put on a happy front on Facebook, Twitter, and Instagram because you know your ex will see it, and wanting to seem like everything is totally great on your side of the breakup. If you simply unfriend your ex. you're free to post what you want without subconsciously tailoring it make him or her jealous.

6. It Will Be One Less Source Of Drama

Hopefully we've all moved past the whole "online drama" stage by our early 20s, but that doesn't mean dramatic things can't still happen even if we don't instigate them. For example: Let's say your ex moves on and has a new GF or BF, and he or she decides to stir the pot by sending you threatening or rude Facebook messages. If you're not even on your ex's friends list, it eliminates any potential source of drama and makes you seem like the bigger person in all scenarios.

In their most basic form, breakups are really about regaining your independence. Sure, it can hurt to transition back into being single, but there are so many wonderful, underrated perks of being single, and you shouldn't be afraid to ease back into that lifestyle. If you're not virtually tied to your ex anymore, you'll feel the most amazing sense of freedom from your past, and you won't be tempted to wallow in self-pity. Making the conscious decision to put your needs first and cut ties will help you feel empowered and ready to take on the world post-breakup.