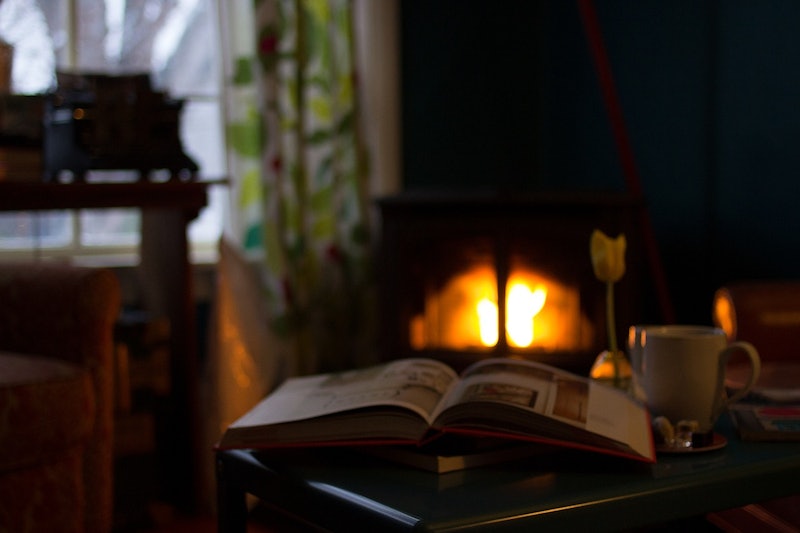 Ah, the holiday season! Bring on all the warm fuzzies, the family, the feasts, the crackling fireplaces and aunties who haven’t seen you since you were “Thiis big.” Or… not. Not everybody goes “home for the holidays.” Some of us will be spending the holidays alone, far away from family and friends. And with all of the holiday-themed movies on TV showing happy families gathered around large feast-filled dining tables, you might want to skip the sweatpants and Netflix plan.

With all the images of family feels and friendly feasts that come with the holidays, there’s a bit of a stigma about being alone during the holidays, but it doesn’t have to be that bad. In fact, a little solitude for the holidays can be just the thing for readerly types like you. Just think of all that uninterrupted reading time. With a few days off work, all the local shops closed down, and, unless you’re lucky enough to be in a sunny side of the world, all that snow, you’ll finally have every excuse in the world to just stay indoors and dig into that giant TBR pile you’ve been meaning to get to all year.

Still, you’ll probably want to avoid any of those holiday-themed books that make you feel like Ebenezer Scrooge for daring to be alone for the holidays, but you don’t exactly want to dive into isolation fiction like Notes From Underground either. Instead, nab a couple of these books before the bookstores close for the holidays and you’ll find yourself enjoying the festivities without all the requisite feasting and kumbayas.

What better way to spend your hermit-ified holiday than by diving into a book about a man who reads so much he gets “literature sick?” Heck, after all the reading you’ll be doing, you’ll probably start to empathize with his symptoms, like struggling to distinguish between reality and literature.

2. The Pleasures of Cooking For One by Judith Jones

Just because you’re not surrounded by family and friends doesn’t mean you can’t eat well. In fact, Judith Jones argues that there are a great deal of benefits in cooking just for yourself and yourself alone — you can experiment as much as you want, you can cook all your favorite meals (no more forcing down Aunt Jenna’s fruit casserole, and you get all the leftovers! Besides that, the book’s also got some great recipes already measured out for one (because who wants to do math during the holidays?).

3. A Moveable Feast by Ernest Hemingway

Not everybody goes home for the holidays and the bars don’t close. Well, at least some of them don’t. So, read A Moveable Feast and get all Hemingway inspired and find yourself making new brief friends (or not) over a cuppa. Or, just read about it.

4. In Search of Lost Time by Marcel Proust

Admit it, you’ve been meaning to read this one for a while now, but you “never had the time.” Well, a week of solitude is the perfect time to pick it up and lose yourself in the reverie. Not to mention, it’s a book all about memory and reflection, so it’ll be just the thing to put you into a reverie of your own whenever you’re not deep in its pages.

5. The Book of Disquiet by Fernando Pessoa

Alone isn’t a bad word, but the world still manages to make it seem like it is, and it’s never quite so difficult to overcome the “alone” stigma as it is during the holidays. When you tell everyone you’ll be alone (voluntarily or not) for the holidays, you’ll get plenty of pity and concerned faces. Ignore them and pick up The Book of Disquiet instead. Pessoa is basically the band leader of the club of voluntary loners (if anyone would actually show up to club meetings that is), and The Book of Disquiet is a reverie of solitude. So, if you’re alone for the holidays, it’s the ideal companion.

Speaking of odes to solitude… why not go straight for one of the most classic works on the joys of being alone?

This is the perfect time for those candy-sweet novels you adore reading, but in public you pretend to be all high-brow. No one’s around raise an eyebrow when you pull it out of your purse after a discourse on the finer points of high literature. And you can get rid of the evidence before anyone’s back. It’s the literary equivalent of binge watching Gossip Girl and then trying to find a way to delete your Amazon history before your roommate laughs at you. Go for it! You know you want to.

8. Is Everyone Hanging Out Without Me? by Mindy Kaling

Well… yes, everyone actually is hanging out without you this time. But you can have a great time without them. Not only is reading this book sort of like hanging out with your best friend, but it’s also hilarious and real and will totally encourage you to just go ahead and finish the box of cookies in your cupboard, because who cares? It’s the holidays!

So maybe you’re not a fragile flower who needs to avoid everything holiday and family related in order to “cope” with the whole being alone thing. Maybe you’re just an awesome badass with a potty mouth who’s totally gonna rock out in your underwear and live it up that you finally have some time to be your badass self by yourself. In that case, bring along Bridget Jones for the ride. Bridget Jones’ Diary is the perfect companion for your sweatpants and Cheetos holiday. So, get to it already!