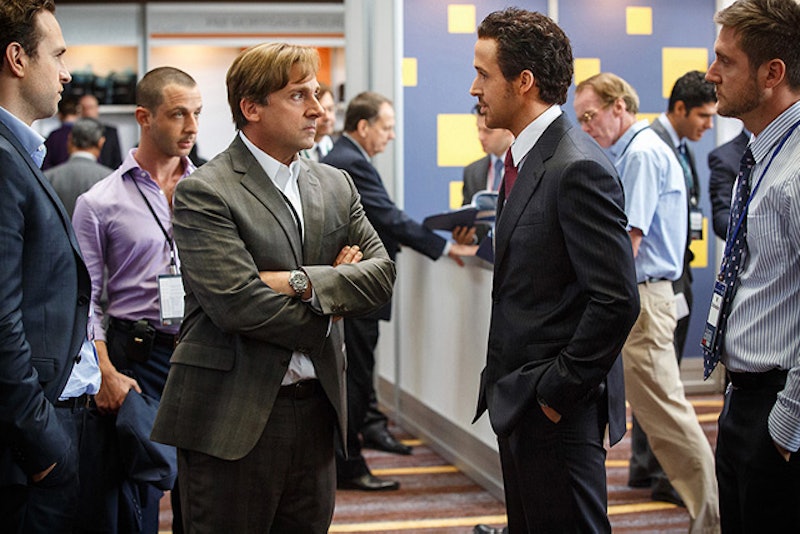 If you've seen The Wolf of Wall Street and loved it, then you're definitely going to want to check out The Big Short, directed by Adam McKay. With A-lister actors Christian Bale, Steve Carell, Ryan Gosling, and Brad Pitt starring in this film about financial crisis of 2007-2010, this movie has a lot in common with Wolf. For one, The Big Short is based on a book, just like Martin Scorsese's The Wolf of Wall Street was. They're also both biographical movies, infused with comedy (because honestly, a finance-based movie would be extremely depressing and/or boring otherwise).

The Wolf of Wall Street did a great job of stirring passions about the country's financial situation and the new film adaption of author Michael Lewis' book, The Big Short: Inside the Doomsday Machine is bound to do the same — this time focusing on the financial crisis of the 2000s. "The people who know me aren’t very surprised that I did this," McKay told Yahoo Movies in a recent interview about The Big Short . "It’s something I’ve always been very into: Politics, finance, and economics." In recent cover story for Vulture, Lewis gave his opinions on the big screen adaptation, set for a limited release in theaters Dec. 11.

When asked what he thought about the film, Lewis noted that the actors' hairstyles stood out to him. "The hair is their hair. I was shocked by how close, especially the principals, captured the actual people. Christian Bale was so much like Michael Burry that I thought it was creepy — he did a very, very good job. He was wearing Michael Burry’s clothes. That T-shirt and shorts. I asked Adam: How did he even know he was wearing that when I went to see him? The answer is he didn’t. That’s what Michael Burry was wearing when Christian Bale went to see him, and Christian was like, 'Can I have your clothes?' I guess he has had to get new clothes now."

What inspired Lewis to write the book in the first place makes for an fascinating chain of events. In an essay penned by the author for Vanity Fair , he wrote about writing his first book on Wall Street, called Liar's Poker, and figured that would be it. But in late 2007, very odd losses from major Wall Street banks had him questioning what was going on. Lewis ultimately was able to track down the very sources of the phenomenon. He wrote in Vanity Fair that he wanted to explore the idea of how "The big Wall Street banks had become the dumb money."

His investigation, and resulting book, led Lewis to those he describes as "peculiar" group of people. A group made up of about 15 oddball individuals who Lewis said would probably have a hard time getting a job at big Wall Street bank otherwise, betted against the big banks, using their "bizarrely organized" structure and corruption against them in order to profit — and so, these 15 outcasts were able to beat a system made of super smart, expert insiders and gained billions in the midst of the financial crisis.

So, if you try to dismiss The Big Short as a mess of economic drivel too difficult to understand, you'll miss the point of the film and the intention of Lewis' book. "The behavior of our money people is still treated as a subject for specialists," Lewis wrote. "This is a huge cultural mistake." After all, a group of outsiders were able to break the barriers of the Wall Street bubble and profit big-time. Lewis hopes that the film will allow people everywhere to have more open, honest conversations about money and finance in their lives — because even fancy Wall Street talk can be made accessible to the rest of us, so long as we don't allow ourselves to get caught up the lifestyle.